Carlin was a stand-up comedian whose set list included topics as diverse as language, religion, psychology, and politics. He is renowned for his “Seven Dirty Words” routine, which played a vital role in the 1978 Supreme Court case FCC v Pacifica Foundation.

According to documents requested by Shawn Musgrave, the FBI first took notice of Carlin following his 1969 Jackie Gleason appearance where he “referred to the Bureau and the Director in a satirical vein.” They maintain that the bit was “considered to be in very poor taste” and “it was obvious that he was using the prestige of the Bureau and Mr. Hoover to enhance his performance.”

The files twice cite Carlin’s joke “‘I’m J. Edgar Noover. I have just come back from a stakeout with Ramsey Clark - that is a cookout in the backyard.’“

The documents also reveal that Hoover took it upon himself to respond to a complaint from viewers in Cocoa Beach, FL who were upset with Carlin’s “‘take-off’ on the FBI, the Director, and the ‘ten most wanted’.”

The viewer complained about “such a flagrant display of poor taste and degradation of one of our finest governmental investigative agencies, which maintains dignity, pride, and honor.” The viewer even went as far as to accuse Carlin of “contributing to the breakdown in this nation’s respect for law and order.” 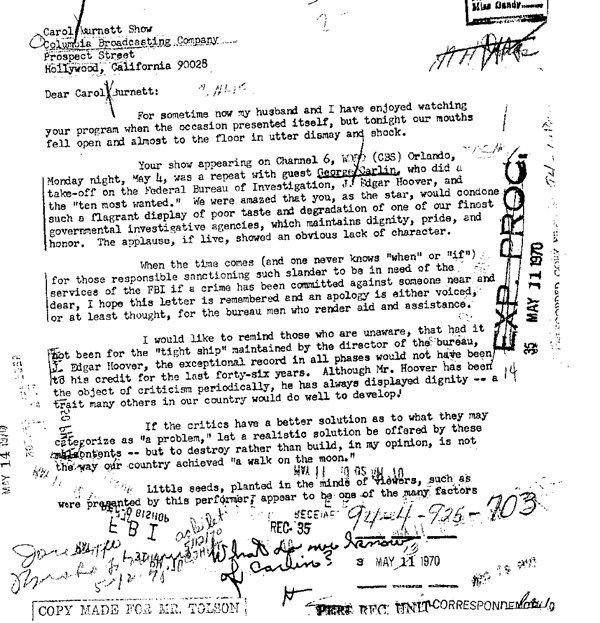 In a later document addressed to Jackie Gleason, another viewer wrote that the Department of Justice “is not a subject to be made fun of, any more than it would be proper to make light of the U.S. Constitution.” The letter also contains mention of “the hippies and the yippies,” and maintains that the FBI “is to be spoken of with reverence and respect rather than jest and so-called wit.”

Image by Bonnie via Wikipedia Commons and is licensed under CC BY-SA 2.0