It was June of 1966, still about a month before President Lyndon B. Johnson would sign the Freedom of Information Act into law and a whole year before the act would go into effect.

James A. Hood, who years earlier had gained national fame fighting to desegregate the University of Alabama in defiance of Governor Wallace, sought copies of law enforcement documents. He sent a letter to J. Edgar Hoover that holds up remarkably well when compared to a typical public records request nearly 50 years later.

Hood’s letter and the FBI’s response, marked with Hoover’s imprimatur, were released to MuckRock after Inkoo Kang requested Hood’s files upon his death earlier this year. 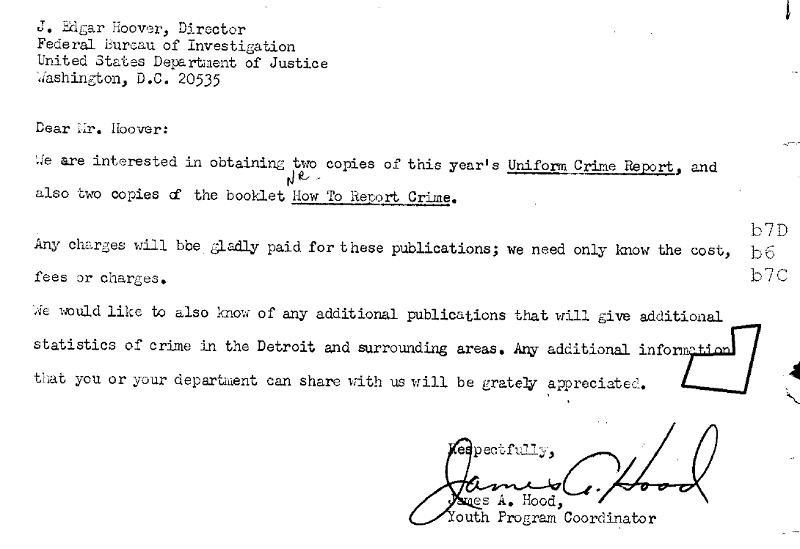 Writing in his capacity as youth director of the Grace Community Program in Detroit, Hood asked for two copies each of a “Uniform Crime Report” and a how-to booklet on crime reporting.

Hoover (or one of the director’s subordinates) responded six days later with two copies of the crime report for 1965. The 1966 version, the FBI said, would be published in late summer, and arrangements had already been made to send Hood two more copies at that time.

“There is no charge for any material we are privileged to disseminate,” the bureau wrote. It’s a shame that sentiment did not persist into the modern day.

But in the Director’s estimation, the crime reporting booklet that Hood requested was not similarly “privileged” for public viewing.

“For your information, this booklet is published primarily for law enforcement officials and agencies,” his letter continues. “I regret I cannot honor your request.”

The FBI was obviously well aware of who Hood was. At the bottom of Hoover’s response, a note referred to Hood’s civil rights achievements: “Correspondent may be identical with James Alexander Hood who was one of two Negroes who desegregated the University of Alabama in 1963.”

Other pages in Hood’s FBI file, which total a sparse seven released pages, seem like part of a background check of sorts performed in 1965, though it’s not clear for what purpose. 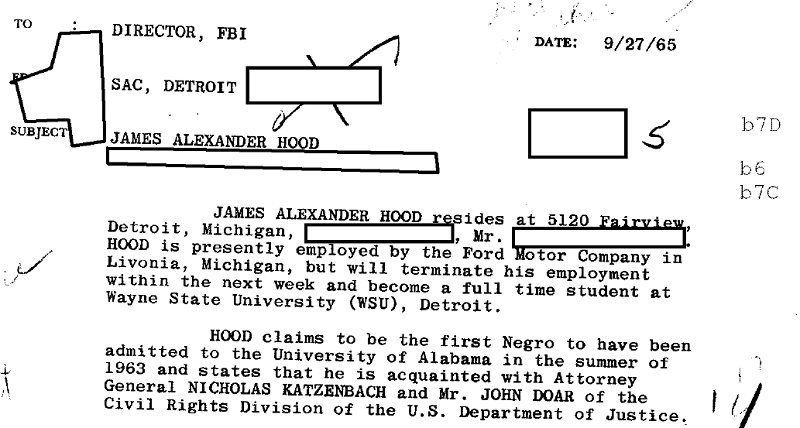 The documents indicate Hood was listed as a victim in one FBI memorandum and that he was extremely willing to work with the bureau because he “felt a debt to the U.S. Government” for federal officials’ help in squelching Governor George Wallace’s attempt to physically block Hood from the university in 1963.

Oddly enough, the FBI’s biographical information on Hood lists his education as “2 1/2 years at Clark College, Atlanta, Georgia” - directly contradicting the rest of the file.

This would no be the last time the FBI would make this kind of glaring mistake.

The file is embedded below, and you can read the rest on the request page.

Image by Ttownfeen via Wikimedia Commons