John Lennon’s sizable FBI file begins in the midst of his 1972 deportation battle with INS. While Lennon argued in court that the motive behind the deportation was political, the Bureau worked to secure a narcotics charge that would get him out of the country before the Republican National Convention that year.

The files - now publicly available after historian Jon Wiener’s 26-year long legal battle with the FBI - stat with a 1972 memo regarding Lennon’s financial support of the “Allamuchy Tribe” - a leftist group founded by former members of the Chicago Seven.

The name didn’t stick - they quickly changed it to the “Election Year Strategy Information Committee” or EYSIC - but Lennon’s support did, donating $75,000 to the group, with the ultimate goal of demonstrating against the 1972 Republican National Convention.

Even more alarming than the direct funding was the revelation that Lennon would be using his “know-how and connections” to put on a series of “rock concerts” that would motivate the youth - every authoritarian’s worst nightmare. 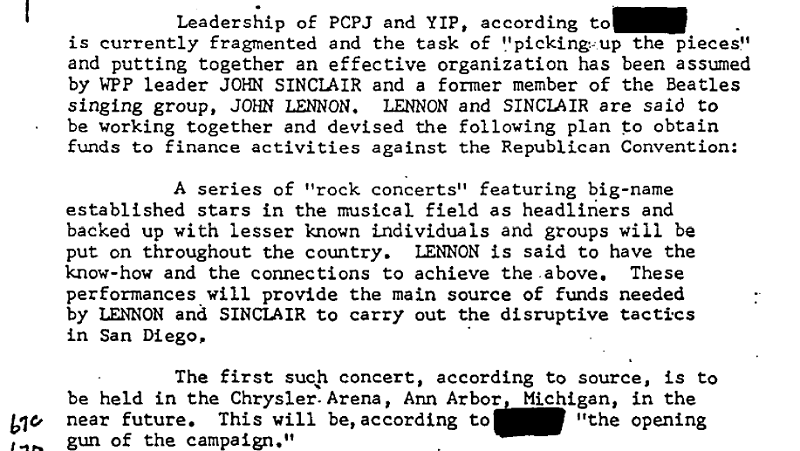 Eager to find something they could use against EYSIC, the Bureau focused on insider reports that tensions were developing due to Lennon’s narcotics use …

which was apparently bad enough to cause the anonymous source to label Lennon “not a true revolutionist.”

At the same time this was happening, Lennon was attempting to replace his expiring B-1 Visa with a B-2 Visa - indicating that he was looking to apply for U.S. Citizenship. The Bureau decided to give INS a call. 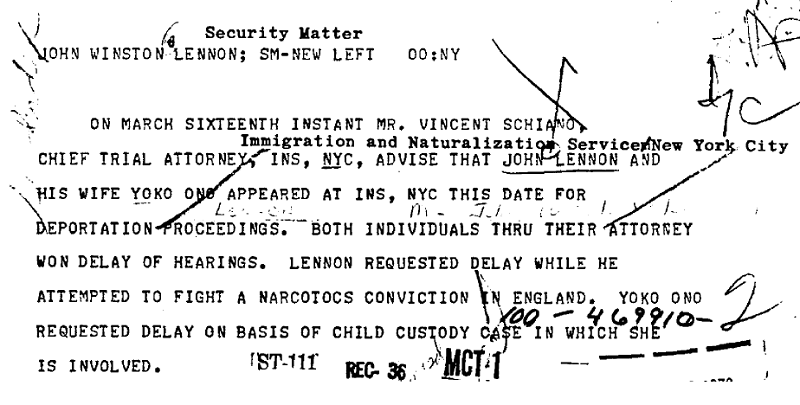 and that the whole process should be delayed, due to - among other reasons - Lennon’s recent appointment to the Presidential Council for Drug Abuse.

Though INS publicly denied the political motivation behind the preceding, and the FBI seemed bemused by “the irony” of presidential appointment …

nonetheless, an internal teletype noted that - whether or not it was the Bureau’s goal - EYSIC was “dying on the vine” while the threat of Lennon’s deportation loomed.

By June, however, it was clear that Lennon’s appeals would successfully delay the deportation process - likely indefinitely, and definitely not in time to prevent his disruption of the RNC …

unless the FBI could bust Lennon on a new narcotics charge.

And so, the Bureau redoubled its efforts to catch Lennon in the act. We’ll end here, with the memo distributed to that effect, featuring what might be the greatest “photo on file” of all time. 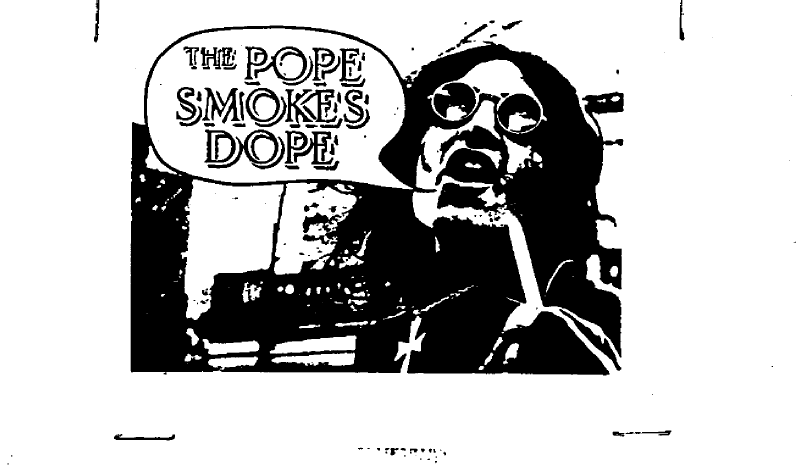 Even better? That’s not a photo of Lennon at all, but rather musician David Peel, off the cover of the Lennon-produced album “The Pope Smokes Dope.” No wonder they had trouble catching Lennon in act.

The first file has been embedded below, and the rest can be found on the request page.

Image via Wikimedia Commons and is licensed under CC BY 3.0 Netherlands