Whether emblazoned on t-shirts or coffee cups, earrings or tote bags, the I ♥ NY insignia is an iconic money maker across the world. The State of New York itself, which owns trademark and licensing rights for the famed logo and all conceivable variations, defends its “competitive position” from forgery and ripoffs large and small.

A recent episode of the podcast 99 Percent Invisible, which interviewed some of the recipients and enforcers of the I ♥ NY trademark, prompted us to dig a little deeper.

New York’s economic development agency has collected $282,499.83 from “enforcement efforts and settlements related to the unauthorized use of the family of ‘I Love NY’ trademarks and service marks” since January 1, 2012, documents released to MuckRock show. Some of that gross revenue has gone to CMG Worldwide, the state’s licensing agent, but the development agency, Empire State Development, has received $196,959.13 as of Nov. 12.

The agency has indicated that it does not have a breakdown of compensation it received for each individual case or settlement. Even if it did, a lawyer wrote, officials would argue that such information was exempt from disclosure because it would reveal knowledge amounting to commercial trade secrets, thereby undermining the “competitive position of the department.” 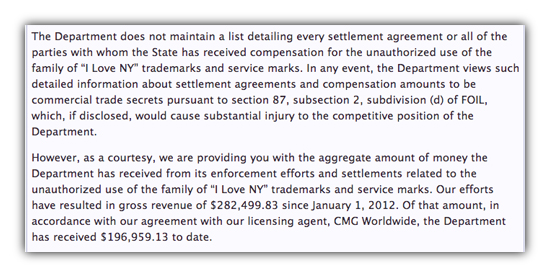 A full list of the trademarks and service marks currently owned by the economic development department show that the state first used I ♥ NY in July of 1977. Officials were then able to put the insignia on products like t-shirts, hats, scarves, and shoes.

The original I ♥ NY logo was created by designer Milton Glaser to support the state tourism industry, according to the New York State Library.

In the decades since, the state has moved to secure several other variations on the I ♥ NY logo and the rights to use the symbol on other products. As of 2011, New York owns an LGBQT I ♥ NY trademark with rainbow colors in the heart, and in February of 2013, the state registered a logo that replaces the heart with a fist holding a hammer.

It also has secured the rights to use I ♥ NY in other countries including such manufacturing centers as Japan, Kuwait, Mexico, China and Singapore.

New York aggressively protects its trademarks and service marks, too. In March, The New York Times reported that the state sent a cease and desist letter to a coffee shop owner using an “I [coffee cup] New York” logo. New York operates a website to serve people who want to obtain a license for use of the I ♥ NY logo.

Empire State Development does not hold a full list of all cease and desist letters it has issued, but officials did provide MuckRock with a partial list of companies they have sent such letters to. The list does not include dates the letters were sent, however, and it does not specifically identify the intellectual property that the companies were allegedly infringing upon.

Adidas, eBay, Facebook, Guess, JC Penney, Macy’s, the Statue of Liberty Museum, Urban Outfitters, Zynga, and Zumiez are among the many companies on the list.

Though Empire State Development holds several trademarks and service marks, including a 9/11 remembrance logo and an “Open for Business” sign featuring a state map, most of its intellectual property is tied to the “I Love New York” family.

MuckRock has also requested a copy of the contract Empire State Development holds with the licensing agent, CMG Worldwide, and is awaiting response. We additionally asked for records of the last five fine and settlement payments the agency has collected for unlawful use of the I ♥ NY logo, as well as licensing revenue generated by the logos.

See the full list of trademarks on the request page, or embedded below:

Compensation for unauthorized uses of the I ♥ NY® logo

List of all trademarks held by the State of New York

List of Cease and Desist Letters Regarding the I ♥ NY® logo