By September 14th, 1960, Isaac Asimov had been a professor of biochemistry Boston University for 11 years, and his acclaimed “I, Robot” collection of short stories was on its seventh reprint. This was also the day someone not-so-subtly accused him of communist sympathies in a letter to J. Edgar Hoover.

The FBI’s file on the author, who died in 1992, indicates that the FBI had its own suspicions about Asimov, based primarily on his extensive science fiction corpus and academic ties.

Hoover’s tipster questioned Asimov’s position “with respect to whether the Soviets had the first nuclear power plant.” He enclosed for the Director a letter he had written Asimov on the subject, and two postcards Asimov had sent in reply. 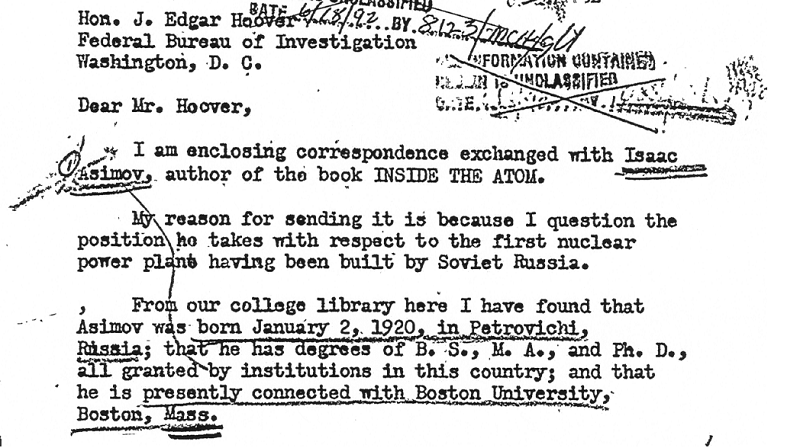 While history has vindicated Asimov’s contention that Soviet Russia were, in fact, the first to build a nuclear plant, the tipster was concerned. When a trip to the local college library revealed that Asimov had been born in Petrovichi, U.S.S.R. just after the Revolution, he felt compelled to bring these findings to Hoover’s attention.

The correspondent closed his letter ominously, “Asimov may be quite all right. On the other hand, . . . . .”

J. Edgar was cordial but dismissive. His assistants noted that this was not this particular correspondent’s first not-so-hot tip, his last sent in 1957 “regarding the Russian Revolution of 1917.” The Director returned all correspondence with thanks and enclosed a few pamphlets on the subject of communism. 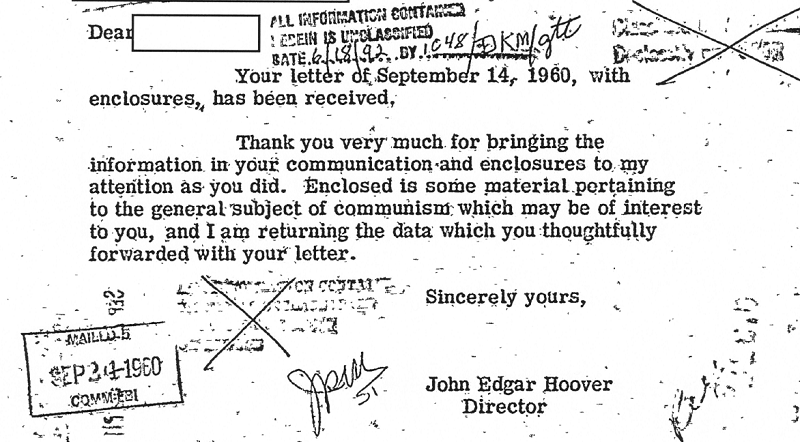 Hoover drily noted to himself “we have no particular interest in his observations.”

This was not the Bureau’s last glance into Asimov, though. A 1965 memo notes that Asimov’s name appeared on a list maintained by the Communist Party USA (CPUSA) of individuals either contacted for recruitment or “considered amenable” to the party’s goals. An informant, who is noted as the chairman of the CPUSA, New England district, provided the list to the FBI’s Boston office. The list included an entry for “ISAAC ASIMOV, Boston University Biochemist,” but did not note whether the party had actually established contact.

The same memo notes Asimov’s science fiction publications, connecting the dots by way of another informant’s eleven-year-old observation that science fiction “did a large amount of ‘blind’ publishing for the CP.” The memo’s author also reviews Asimov’s academic history as a biochemist, weighing whether the author might be a potential match to the Soviet informant codenamed ROBPROF, who was also in academia.

“Boston is not suggesting that Asimov is ROBROF,” the memo concludes, but “he should be considered as a possibility in light of his background, which contains information inimical to the best interests of the United States.” 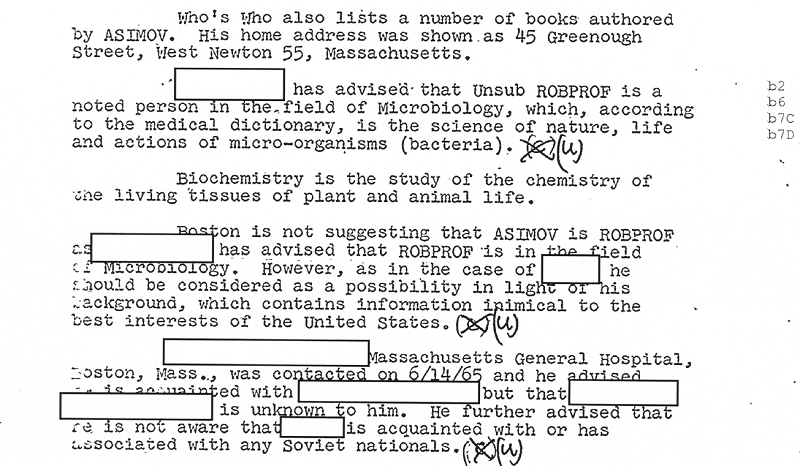 Due to the ROBPROF suspicions, Asimov remained on the FBI’s radar. In a brief 1967 memo, a field agent updates Asimov file with a change of address, credit history check and confirmation of spotless criminal record for both the author and his first wife, Gertrude. The couple’s immigration files also failed to uncover any dirt, and a captain of the Boston University Police Department confirmed that he was still employed by the university.

The FBI’s file on Isaac Asimov ends at 1967, so it seems that their ROBPROF investigation steered toward other suspects. Thousands of pages of Bureau records regarding “Operation SOLO,” its longstanding investigation into and infiltration of the CPUSA, are available online at the Vault. MuckRock has requested all files on ROBPROF and its list of CPUSA rolodex, as well as Hoover’s pamphlets on communism and the youth.