The Maine State Police (MSP) spent just $300 to purchase an unmanned aerial vehicle (UAV) in January. The small drone, marketed as a toy plane for filmmaking, is controlled via smartphone or tablet application.

While this UAV model is not designed for law enforcement use, the department indicates it intends to use the unit in field operations.

The Department of Homeland Security has granted hundreds of thousands of dollars to law enforcement agencies around the country for UAVs. Typically the units cost more than $10,000. The Seattle Police Department spent more than $82,000 on its two Draganflyer units, which they recently were forced to return to the manufacturer. The sheriff in Montgomery County, Texas purchased its Shadowhawk UAV at a cost of more than $220,000.

But MSP incurred a cost of only $304.93 for its Parrot AR.Drone 2.0, according to an invoice released to MuckRock as part of the 2012 Drone Census. MSP purchased the indoor hull model of the AR.Drone. Manufacturer specifications for the AR.Drone indicate that the units weigh less than 15 ounces and can fly for 15 minutes on a single battery charge. 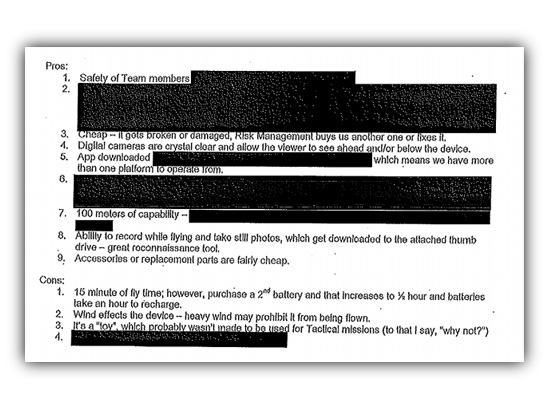 The only document MSP released with the invoice was an unsigned and undated list of pros and cons for the purchase of the AR.Drone. Listed pros include the camera’s “crystal clear” images, its “100 meters of capability,” usefulness as a “great reconnaissance tool” and budget-friendly price tag. The list enumerates four cons (one of which was redacted): short flight time, susceptibility to wind and the UAV’s intended use as a toy.

While the AR.Drone “probably wasn’t made to be used for Tactical missions,” the list’s author asks, “’why not?’”

Parrot, the manufacturer of the AR.Drone, touts its “revolutionary” piloting modes that allow the UAV to perform flips and other tricks. The AR.FreeFlight app, available for download on smartphones and tablets for both Apple and Android devices, allows users to control the UAV’s direction by tilting the device.

The Bangor Daily News reported last July that MSP had “no plans to acquire a drone,” according to its chief, Col. Robert Williams. But in response to MuckRock’s records request, the department’s attorney stated that there have been “at least two occasions” in the past when personnel “have taken the initiative to research and propose the possible acquisition by the Maine State Police.”

MSP did not release any waivers from the Federal Aviation Administration authorizing the agency to deploy its drone or certifying the AR.Drone as airworthy for the field. The department attorney emphasized that the agency “has not deployed in operations by our agency to date, and will not be so deployed until appropriate agency policies are in place.”

The Maine legislature is considering a bill to regulate the use of drones by law enforcement agencies in the state. The bill would require agencies to obtain a warrant prior to conducting aerial surveillance with a UAV except under emergency circumstances.

Read the invoice is embedded below, or on the request page.

Maine town tries to charge MuckRock $750 for opening an email