The Seattle Police Department plans to expand its drone program over the next year with the purchase of two additional units, documents released to MuckRock indicate. The additional drones would cost SPD at least $150,000. But beyond conducting limited training exercises, SPD has never deployed the two drones it purchased in 2010 for $82,000. Furthermore, SPD has no clear policy outlining how drones can be deployed in the field.

SPD drew criticism earlier this year when an Electronic Frontier Foundation lawsuit revealed that the department had applied in 2010 for FAA certification to operate drones. Having purchased two Draganfly drones at a cost of $82,553 in September 2010, SPD apologized to Seattle city councillors in May 2012 for not keeping its members and the general public better apprised of its plans for using its unmanned aerial vehicle (UAV) units.

The documents confirm that SPD’s 2010 drone purchases were funded with grants from the Department of Homeland Security’s Urban Area Security Initiative (UASI). UASI funds also paid for UAV flight training and ground school for SPD officers in 2011 and 2012, which is required for FAA certification to operate drones in domestic airspace.

The documents also indicate that SPD seeks to expand its UAV program. Emails released to MuckRock outline SPD’s solicitation of bids from four drone manufacturers over the past two years. While it is not clear whether SPD plans to use UASI funds to purchase its additional drones, these emails suggest that the department seeks to buy at least two additional units.

One email to Kansas-based Flint Hills Solutions outlined SPD’s wishlist: its next drone must be operable in inclement weather, photo- and video-enabled, deployable in under five minutes, capable of flying at least twenty minutes and equipped with pontoons for emergency water landings.

Another manufacturer, San Diego-based Datrons World Communications, Inc., initially sought to provide SPD with a complete UAV system free of charge as part of its nationwide marketing campaign. In an email exchange titled, “Let’s make a deal,” Datron’s sales manager outlined “certain expectations” for a prospective partnership, including using SPD “as a source for press releases” bolstered with the department’s field usage testimonials and operational feedback.

The documents indicate that SPD turned down Datron’s partnership, and instead plans to procure additional drones from Leptron Industrial Robotic Helicopters, which is based in Ogden, Utah. In August 2011, Leptron sent the department a sales quote for two Avenger drones at $65,000 per unit. With on-site training and upgrades to suit SPD specifications, the total bill would come to nearly $180,000.

The Leptron quote highlights that by using a lease-to-own agreement, SPD’s drone purchase “does not require voter approval.”

While the documents include no final bills of sale, a signed contract from May 2012 indicates that SPD plans to apply for FAA certification to fly Leptron drones. The leasing contract provides one Avenger UAV unit to SPD for six months strictly for the certification process, which is make- and model-specific. Once SPD obtains FAA authorization to fly Leptron Avenger UAVs, “the Lessee [SPD] will provide their own Leptron Avenger for training classes and exercises.” Given the annual renewal required for FAA certification, this lease suggests that SPD intends to purchase additional drones from Leptron within the year.

SPD also plans to train additional personnel in anticipation of expanding its UAV program. A departmental newsletter from March 2012 sought volunteers from the SPD ranks to train as drone operators and visual observers.

According to the notice, SPD “is preparing to train and certify additional personnel to operate [its] current UAS as well as future systems,” and the department anticipates that “the FAA will significantly increase the area where [it] can operate in 2012.”

It’s clear that SPD, and its Homeland Security section in particular, sees potential value in employing drones for a variety of purposes. While the department has never deployed the two units it already owns, ostensibly due to FAA restrictions, SPD is well on its way to purchasing additional drones and training more officers as drone pilots and visual observers.

Following public concern over the revelation of its 2010 drone purchase, the Seattle Police Department has assured the public that it will deploy its Draganfly X6 units solely for training and evaluation “until appropriate policies for use are developed and approved.” However, SPD rescinded its policy on deploying unmanned aerial systems (UASs) after less than a month on the books, without drafting any replacement guidelines.

SPD purchased its two UAVs in September 2010, but the department did not issue guidelines governing their deployment until July 2012. While SPD’s drone certification application to the Federal Aviation Administration in 2010 (obtained by the Electronic Frontier Foundation) enumerated planned uses–surveillance of hazardous spills, search and rescue operations and “tactical support of law enforcement operations”–SPD had no departmental deployment policy for the first year and a half that it owned the drones. 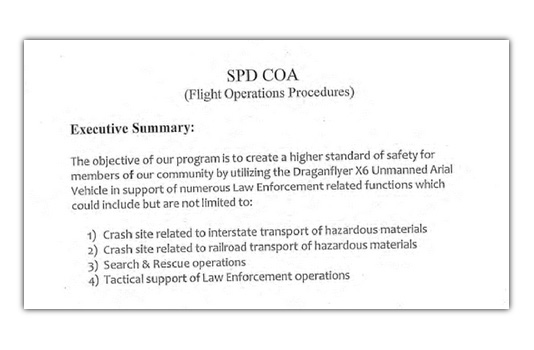 The FAA’s 2011 authorization (effective through April 2012) limited SPD drones to fly at altitudes below 400 feet within a quarter nautical mile of either Discovery Park or Magnuson Park, or within a half nautical mile of Jackson Cove. 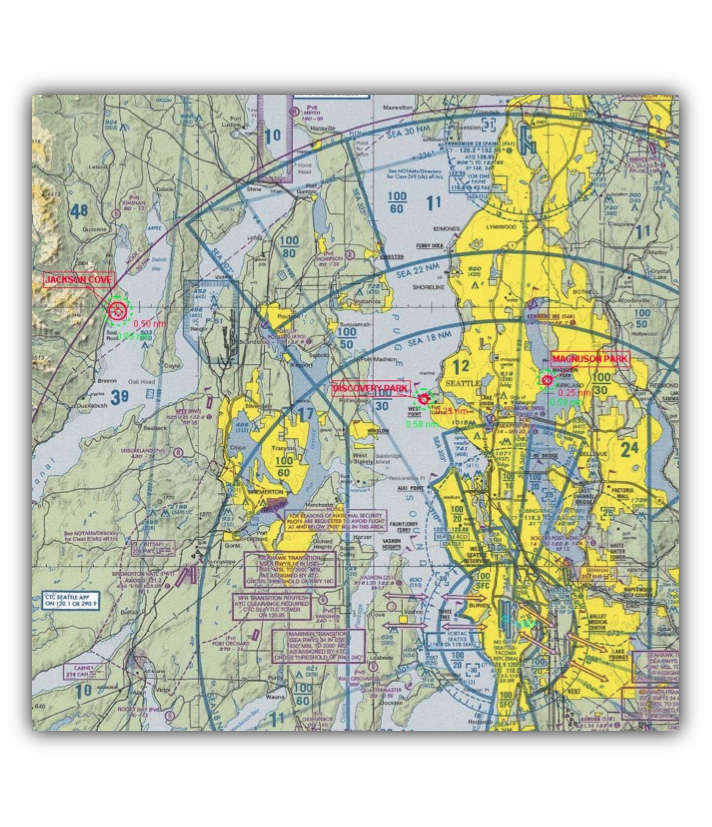 The 2011 FAA certification also restricted SPD to operating its drones only within sight of a trained visual observer, and banned flying drones over “populated areas, heavily trafficked roads, or an open-air assembly of people.” A March 2012 departmental notice for UAS pilot and observer training predicted, however, that “the FAA will significantly expand the area where [SPD] can operate [drones] in 2012.”

But less than a month later, the limiting policy had been eliminated. A directive dated August 15, 2012 rescinded the drone deployment guidelines, without indicating any replacement guidelines or explaining the reasoning behind the move.

A follow-up call to SPD Detective Brendan Kolding from the Professional Standards Section confirmed that the drone guidelines had been eliminated and not superseded.

“We do not have anything on the books governing use of drones,” Det. Kolding said in an interview. “But I’m sure we won’t deploy [the drones] until we do have a policy.”

Without any guidelines in place to govern their deployment, the specific capacities the department will assign to its expanded UAS program remain undefined.

Drone Watch sent this request to the Seattle Police Department of Seattle, WA