In the wake of Hurricane Katrina in August 2005, which cost more than $100 billion in damage, killed more than 1,300 people and overwhelmed the infrastructure of New Orleans, analysts struggled to settle on which level of government should bear blame for the unprecedented disaster and its fallout. Upon reviewing the storm’s lessons for disaster management, military analysts from the U.S. Joint Forces Command focused on a critical “response gap” and lack of coordination that overwhelmed local first responders.

An undated Joint Forces slideshow, which spans 150 pages and was released following a MuckRock FOIA request to U.S. Northern Command, outlines failures at the local, state and federal agency level, as well as obstacles that barred effective response and steps to avoid repeating these mistakes in future emergency management scenarios.

After Katrina made landfall and the levees broke, many first responder facilities in the most heavily affected areas such as the Ninth Ward were as much underwater as the civilian areas surrounding them. 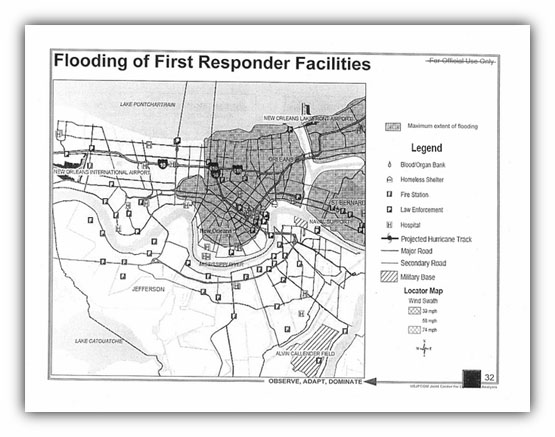 According to the slides, authorities at all levels “did not understand what was happening, did not initially share critical information, did not quickly organize the response effort, [and] did not always take needed initiative and did not work effectively with the media to get the facts to the people.”

Chief among the concerns addressed in the military’s document is the “Response Gap” — the time from the incident to when state and federal aid protocols were initiated and when that aid actually arrived.

A series of charts emphasize this lag by plotting official relief activity level against time, illustrating how decisive action came too late for effective response at critical points as the situation unfolded. The presentation suggests that changes in situational awareness, policies, laws, resources, authorities, public response to warnings and a unity of effort are all required to close the response gap. 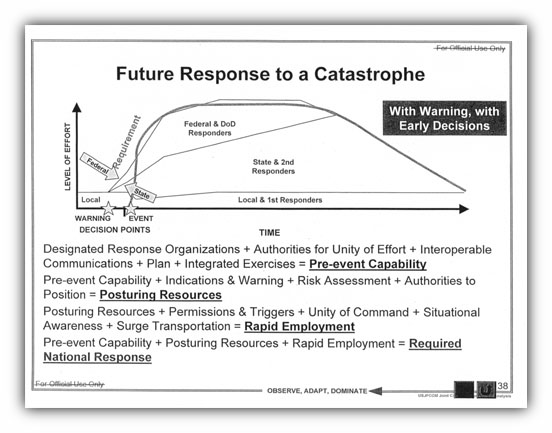 Extending this lesson to future disasters, one more optimistic chart predicts that with enough early warning and early decision making, the state and federal responses could coincide with a catastrophic event and the relief demand.

However, a nationwide review of emergency response plans cited in the document showed only 27 percent of states and 10 percent of cities were adequately prepared should a disaster strike in their jurisdictions. At the other end of the preparedness spectrum, the Department of Transportation paid for 200 buses to sit in the Gulf region awaiting evacuation orders in the summer of 2006, fearing a repeat of the 2005 hurricane season. The Department of Defense also contracted fuel suppliers to deliver along evacuation routes for that same season.

Spooning through the alphabet soup of acronyms and abbreviations throughout the slides reveals other details about the shortcomings that stymied adequate disaster response, in particular communication breakdowns. Beyond the three million people in three states without phone service, more than three dozen 911 call centers were rerouted, radio communication among first responders was severely hampered and more than 100 radio stations were off the air. Looking back to disasters that preceded Katrina, the Joint Forces analysts highlight communications as a perennial issue. 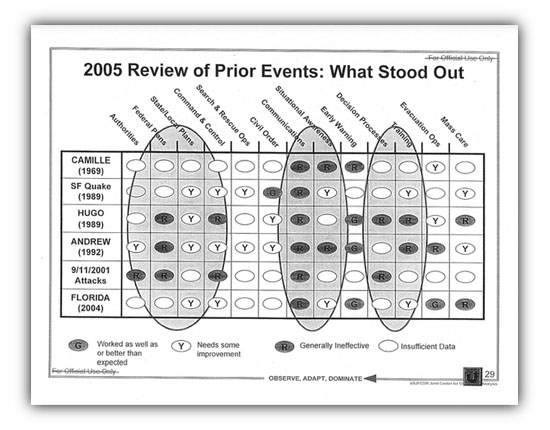 Beyond communications issues, the presentation addresses the complex procedures and protocols that must be followed for local and state authorities to access federal assistance. Two sequential slides compare the theoretical 10-step sequence for states to request and receive federal disaster aid and what actually unfolded in the case of Katrina: 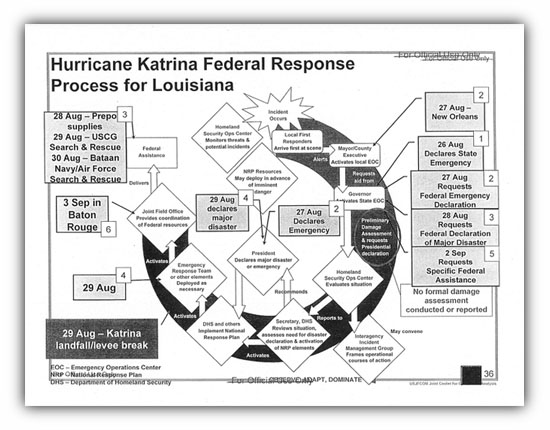 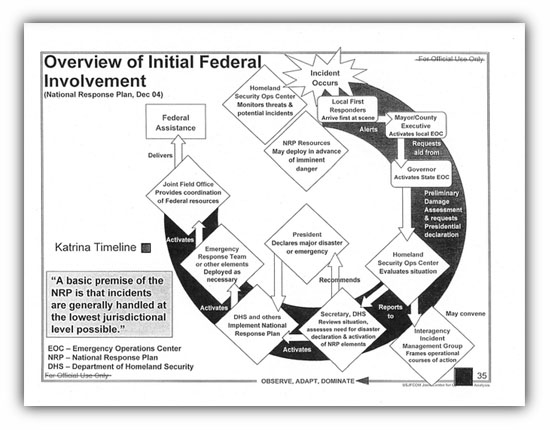 In something of a worst case scenario consideration, the presentation addresses a hypothetical scenario — maybe a pandemic — in which the needs exceed government response capabilities. The slide notes loss of services and freedoms, isolation and quarantine as foreseeable fallout should disaster responders fail to address the issues outlined by its authors. 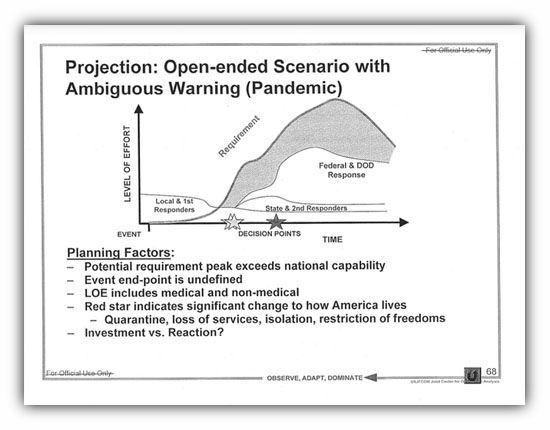 MuckRock’s request to U.S. Northern Command was only partially fulfilled: NORTHCOM records officers provided the slideshow and pointed to additional documents published online, including a White House lessons learned report, the Senate’s full report on Katrina and the Government Accountability Office’s statement before the House of Representatives in 2006. However, the National Guard Bureau withheld 265 pages of responsive documents in their entirety.

Read the full response embedded below, or on the request page.