All defense and military agencies filter and flag FOIA requests likely to draw media attention, according to documents released by the Defense Department. At least three MuckRock requests were among those kicked up the ladder for special review from Pentagon brass: Two were for Congressional correspondence and one was a pending request on how the National Guard uses drones.

Earlier this month, Cause of Action released a policy document it obtained from the DoD Freedom of Information Policy Office. The policy outlines the protocol for “significant” FOIA requests, defined as “[a request] where, in the Component’s judgment, the subject matter of the released documents may generate media interest and/or may be of interest or potential interest to DoD senior leadership.” The policy specifically identifies requests related to the President, “current or previous DoD leadership” or members of Congress as prime candidates for this special status.

Significant FOIA requests must be copied to the DoD Freedom of Information Policy Office for consultation and second glance over released documents: 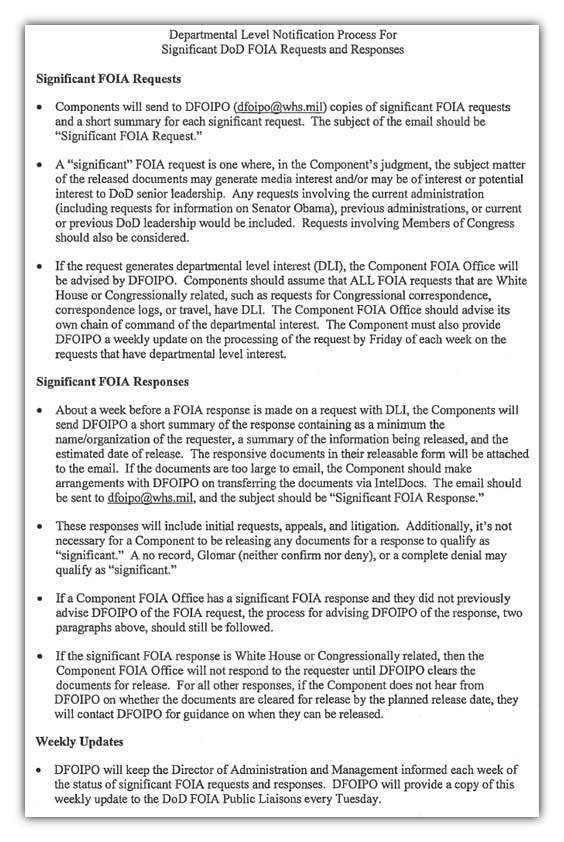 Jason Leopold, who recently shared FOIA tips and tricks with MuckRock, obtained a list of requests so flagged since November 2012, when Pentagon FOIA office states the list was created.

Of those 95 requests kicked up to the Pentagon for review, three came from MuckRock. Two were submitted by MuckRock co-founder Michael Morisy for Congressional correspondence from the Defense Logistics Agency and the Army & Air Force Exchange Service. The final honorable mention was my Drone Census request sent to the Army National Guard and the Air National Guard.

The spreadsheet indicates that all three requests have been “closed,” which Leopold suggests is indicative of Pentagon authorization to send out responses. In light of this, we have asked for an update on the Drone Census request, as the National Guard Bureau currently estimates it will not send documents before Halloween.

The Pentagon’s close attention to these requests is both flattering and concerning. Such additional clearance protocols risk politicizing FOIA, not to mention add undue and disproportionate delays for some requests deemed sensitive even though they don’t necessarily deal with exempt or classified material. MuckRock has also filed a request to the DoD Freedom of Information Office for correspondence related to these significant requests to get a better sense of how this status impacts FOIA fulfillment and the release of documents.

Shawn Musgrave sent this request to the Department of Defense, Freedom of Information Policy Office of the United States of America

FOIA Roundup: PPP loans to franchisees and how whistleblowers faired under Trump