Surveillance drone training flights conducted by the Ohio Army National Guard are collecting data that could be shared with other law enforcement agencies.

The Ohio Army National Guard (OANG) conducts training flights on surveillance UAVs (unmanned aerial vehicles) out of three sites in Springfield, Ravenna and Clinton County. A boilerplate memo from the National Guard Bureau outlines that drones may not target U.S. citizens during these training missions, but that incidental information collected in-flight may be retained and disseminated to other government agencies.

While the documents do not include any bills of sale or invoices, dated operations protocols and memos suggest that OANG has been flying UAVs in Ohio since at least January 2011. It is unclear how many drone units OANG operates in total, but all documents refer to the Raven RQ-11, a “4.2 lb hand-launched reconniassance and surviellance tool.” The Raven has a cruise speed of 30 mph, and has been used by the Army in Iraq and Afghanistan.

OANG affirms that “UAV/UAS(s) assigned to the Ohio Army National Guard do not have the capability to be equipped with weapons,” and that the only payload they carry is video equipment. Waivers issued to OANG by the Federal Aviation Administration authorize drone flights for training missions, and OANG indicates that the agency has no plans “to use/seek SECDEF [Secretary of Defense] approval to use UAS’s outside of Training (sic).” 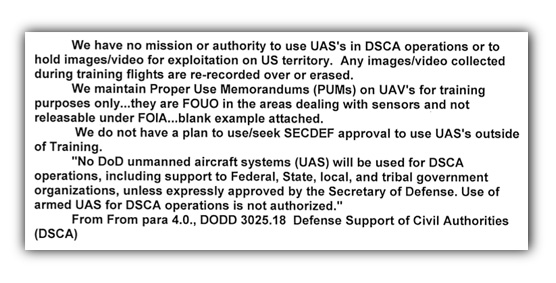 Whereas the FAA authorizes law enforcement UAVs to fly up to 400 feet, OANG can fly its units up to 2,500 feet above ground level at one site. OANG released two FAA waivers to MuckRock: one for flights out of Camp Ravenna that expired on Feb. 15, 2013, and the other for flights out of the Springfield-Beckley airport that remains active until May 21, 2013.

MuckRock has asked OANG for FAA waivers for flights out of the third site at Wilmington Air Park, which were not included in the released documents.

This boilerplate memo, which it appears was sent to all national guard units operating these specific models, includes a certification that operators deploy drones “not for the purpose of targeting any specific U.S. person.” The OANG submits that its authority does not allow for storage of data collected on U.S. territory, and that “any images/video collected during training flights are re-recorded over or erased,” but the boilerplate memo is less categorical when it comes to data purging.

The National Guard Bureau directs that personally identifying information “unintentionally and incidentally” collected about specific individuals must be destroyed. That is, such data must be purged “unless it may be lawfully retained and disseminated to other governmental agencies that have a need for it” with respect to “applicable laws, regulations, and policies.”

It has been reported previously that the Air Force has a similar policy regarding incidental collection of surveillance data: under an April 2012 directive, information collected by Air Force drones flying in domestic airspace may be provided to relevant law enforcement authorities. The Air Force directive establishes a retention period of 90 days for incidentally collected data, but the National Guard Bureau memo includes no such limitation.

MuckRock is in the process of ascertaining whether any similar directives or policies govern the collection and retention of data by national guard UAVs deployed across the country.

Read one of those documents embedded below, and read the rest on the request page.