Over a span of almost nine months, the Austin, TX police department pursued plans to lease an Unmanned Aerial Vehicle (UAV), only to kill the program suddenly. Revealed in documents obtained as part of the Electronic Frontier Foundation and MuckRock’s Drone Census, we get an agency-eye view of the process required to go from conception to (almost) kickstarting a UAV program.

The program idea appears to have come from Senior Patrol Officer Eric Cortez, an officer in the Austin Police Department technology unit. The earliest document provided was his Oct. 7, 2011 message to Draganfly Innovations:

Cortez, interested in what drones are capable of, asks if Draganfly Innovations could get him into contact with Texas A & M University for a live demonstration. Draganfly provides him with contact information, setting him on his next lead.

He sends an email to Kimberly Mallet, administrative assistant of Texas A&M University’s Computer Science and Engineering department. Repeating what he said in the above email, Cortez goes on to add that:

Mallet responds that the professor in charge is currently on travel and this email will be there last until may May 9, 2012, when the University extends Cortez an invitation to a robotics demonstration invitation.

On Feb. 24th, 2012, Cortez shares an e-mail with his supervisor, Sergeant Scott Ogle, about the department’s acceptance into a drone evaluation program: 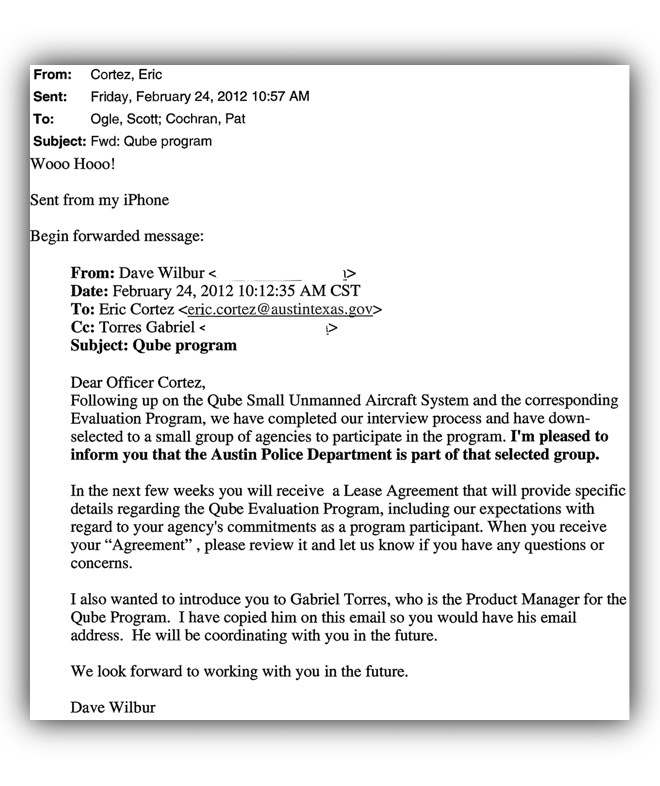 While the email that Cortez sent to AeroVironment wasn’t provided, a release posted on Aerovironment’s website shows that this trial program was made available to police agencies sometime around Oct. 27 (right after Cortez’ e-mails with Texas A & M went quiet).

Cortez’ emphatic “Wooo Hooo!” comes from the fact that since this is a trial and evaluation program, the Austin Police department does not have to purchase the drone; they only need to pay the insurance fees.

The Qube is a drone that is made specifically for law enforcement application. Aerovironment provided the Austin Police with a data sheet touting its features.

While military drones can be in flight for up to 27 hours or more, common flight times for a small drone is anywhere from 15 to 25 minutes. The Qube sports an “unmatched” flight time of 40 minutes with its payload, which often refers to the camera and surveillance equipment which is equipped to the vehicle. The Qube’s ability to utilize vertical take off and landing (VTOL) is an important aspect for law enforcement. VTOL not only allows the drone to take off and land virtually anywhere, it can also hover in place, allowing the drone to survey a single location over a continuous duration. The other style of drone is called a “fixed wing” and is more often used in military application. Fixed wing drones can fly farther and fly longer, but need a runway to land and launch, and have no ability to hover in place.

The Qube is equipped with touch screen interface. As this technology is intuitive and easy to use, it eliminates a significant amount of training (and training costs) that would often be necessary for radio-controlled (RC) pilots. An RC drone pilot requires significant flight knowledge as he is simultaneously controlling the speed, angle and position of the drone. The touch screen system handles almost all of those aspects, allowing the user to input simple commands such as place, height, speed or hover while the computer does the rest.

As the program moves forward Cortez realizes he needs help as the Austin Police is “juggling the lease agreement, policy, PR campaign and COA [certificate of authorization] application”. He contacts Lieutenant Chad Gann of the Arlington Police Department, knowing they use drones. 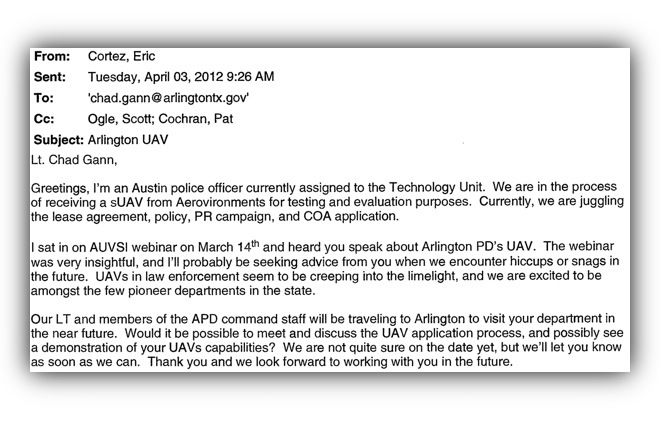 He gets a quick response from Gann:

But then the e-mails stop and there is nothing else from the Arlington police throughout the documents. Though Arlington did not yield much assistance, Texas A&M does respond about attending a drone demonstration and seminar on their campus: 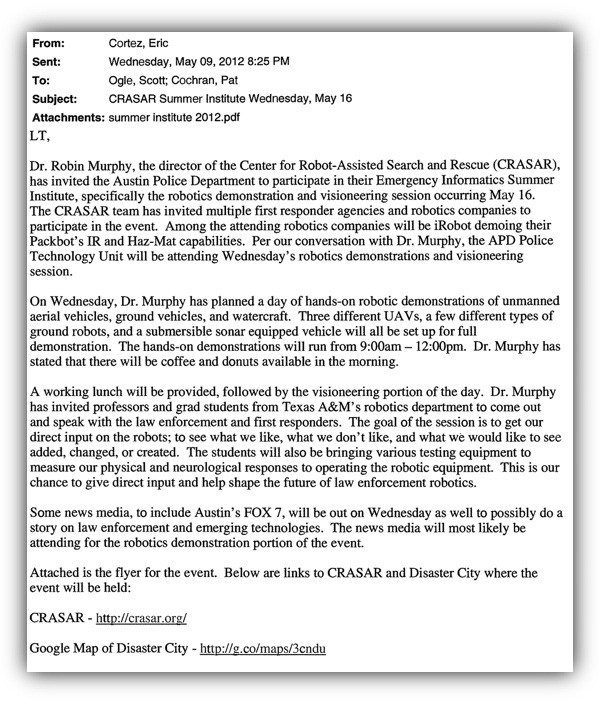 Cortez and his technology team finally get to experience a drone’s abilities first hand. The demonstration had such an impact on his team that five days after the robotics demonstration, Lieutenant Pat Cochran of the Austin Police technology department sent this message to the rest of the unit: 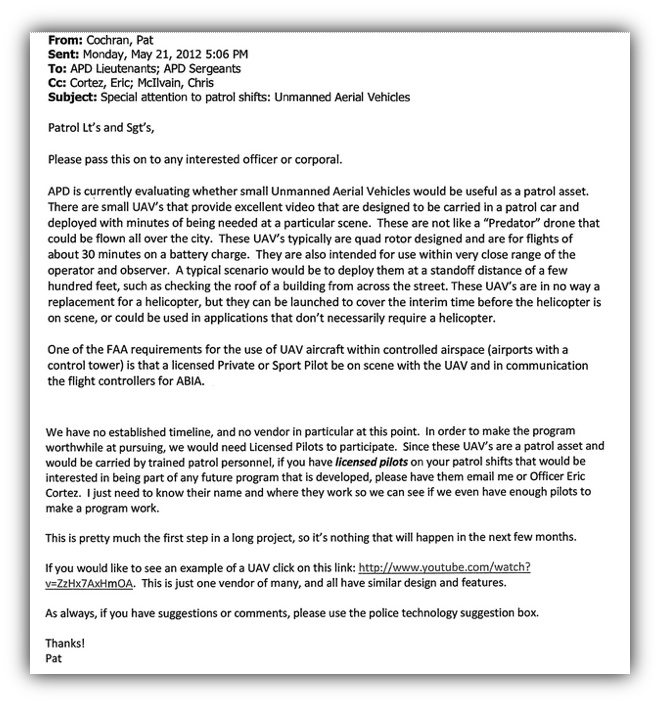 There were a number of volunteers eager to get behind the controls of a drone: 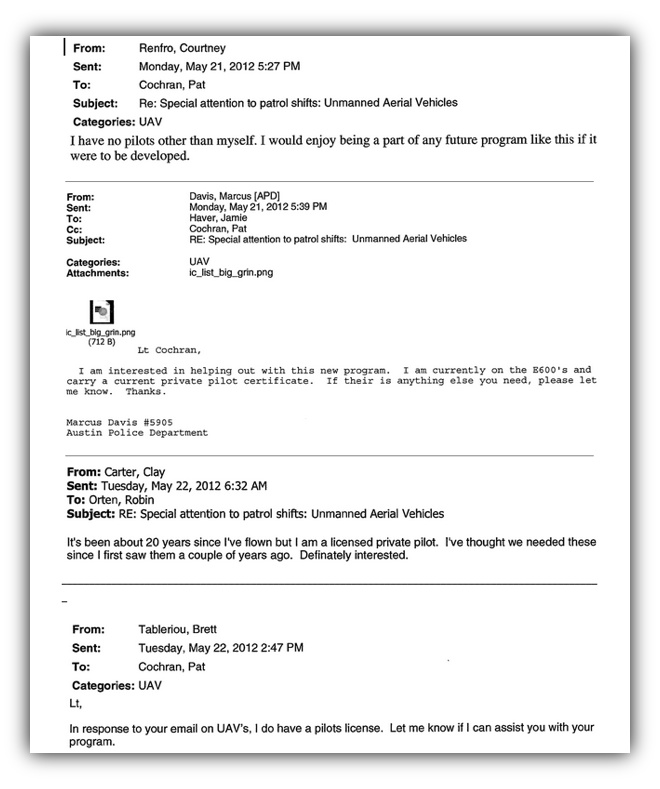 The price to pay

Interest in the program seems widespread at the front end of the department. However before the program can go forward, the Austin Police Department must find out how to pay the insurance costs. The insurance cost is determined by the base price of the drone of potential spares.

Austin’s Financial Manager Danielle Lord wrote that the system, including spares, was valued at about $120,000.

Lord and Vance then contact Falcon Insurance Agency, headquartered in Texas, to understand what insuring a unit of this value might cost them. 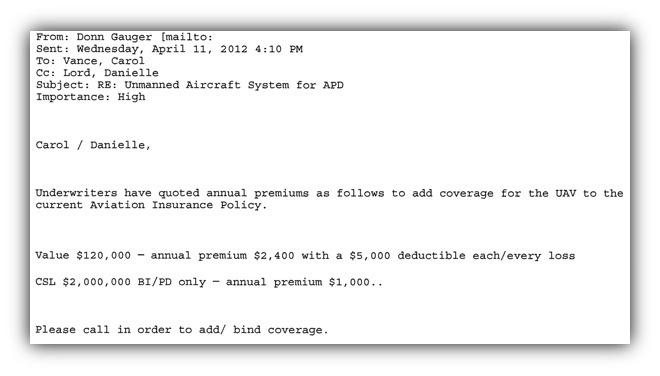 Lord expresses her apprehension with this price, and it will be this added insurance cost that haunts and perhaps ultimately dooms the project. As Lord and Vance move forward, they contact purchasing and clear up a few more inconsistencies in the lease agreement and send it one last time to City Legal.

It is here where the UAV project slows to a crawl, which proves too slow to have this project go forward. On June 22nd, 6 days before the project is cancelled, the Austin Police asks if the agreement is ready to go. From within the department they even found ways to make the funding work for this project’s success:

But unfortunately for the Austin Police Department, City Legal had not finished reviewing it and time had run out. On June 28th Cortez, Cochran and the rest of the technology department received the final news concerning the fate of their proposed program: 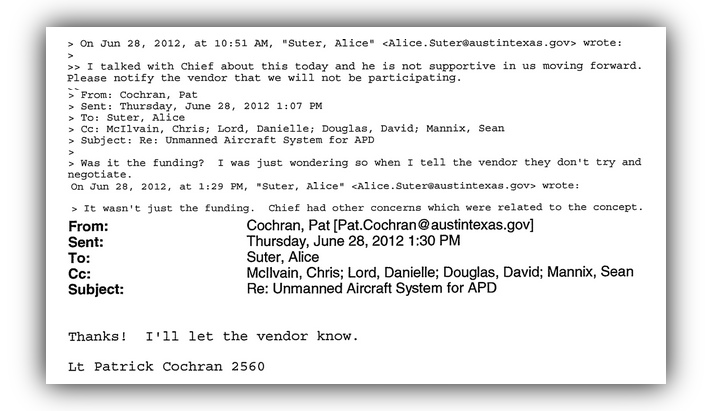 Read through the full docs on the request page, or embedded below:

Drone Watch sent this request to the Austin Police Department of Austin, TX