The Associated Press examined public records and independent research on 43 mining sites in the U.S. and found that over 50 million gallons of contaminated water flow untreated into local rivers, ponds, and lakes every day. Records revealed that federal officials are warning the levels of contamination at the worst of these mining sites could lead to an environmental disaster akin to the 2015 Gold King Mine blowout in Colorado.

In some towns near mining sites, the tap water has been rendered undrinkable by the mineral contamination. And some aquatic ecosystems around these sites have become permanently uninhabitable, as local and national environmental agencies throw millions of dollars every year into cleanup efforts.

This news comes at a time when the Trump Administration is seeking more and more cuts to the Environmental Protection Agency, including “sharp cuts” to the Superfund program, which prioritizes and funds cleanup efforts at the most hazardous mining sites in the U.S.

A team of researchers published a report in the medical journal JAMA on Feb. 19 that used over 5,000 records obtained through FOIA requests to the FDA to uncover almost a decade of inappropriate prescription and distribution practices for the drug fentanyl, an opioid painkiller that is 100 times stronger than morphine.

Most notably, the study found a contradiction between the findings of the FDA’s surveys for their fentanyl Risk Evaluation and Mitigation Strategy and the actual prescription and distribution practices of doctors and drug companies. While the vast majority of those surveyed reported adequate knowledge of fentanyl use and the importance of limited prescription, the drug was given out far more than appropriate to almost half of the patients who received it. Moreover, it found that despite purporting to monitor prescribers and producers alike, the FDA never followed through on its promise to pressure drug companies to drop doctors who were prescribing fentanyl to ineligible patients.

Caleb Alexander, co-director of the Center for Drug Safety and Effectiveness at the Johns Hopkins University Bloomberg School of Public Health and one of the leaders of the study, told the Washington Post that this oversight failure is unexpected and seriously concerning. “The whole purpose of this distribution system was to prevent exactly what we found,” he said. “It should never happen. It’s a never event. And yet we found it was happening in 50 percent [of the cases].”

According to expense reports obtained by ProPublica through public records requests, Darin Selnick, a senior adviser to VA Secretary Robert Wilkie and a key player in the Trump administration’s controversial new rules on referring veterans to private doctors, used taxpayer money to fly back and forth between his homes in California and Washington D.C. from October 21st, 2018 to January 19th, 2019. These expenses total almost $12,000 for flights, food and hotel rooms. 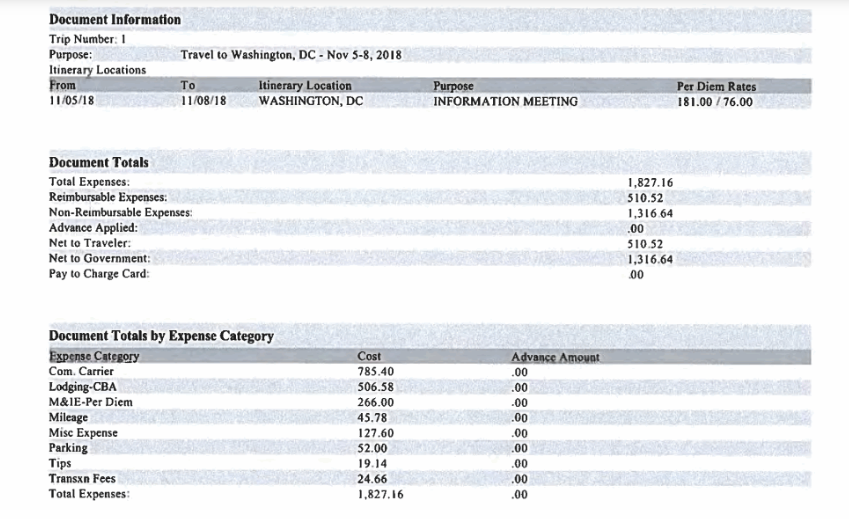 Former director of the U.S. Office for Government Ethics Walter Shaub told the Pacific Standard that the expenses may violate federal regulations on travel expenditures by not specifying his station of duty, necessitating “wasteful” expenditures on frequent travel.

“It starts to look like they set his duty station in California just so he can have free flights,” Shaub said. “It may or may not violate a specific rule, but it would be a management decision that could be called wasteful, and the inspector general would likely fault them for that.

Central Research, Inc is looking for a Senior FOIA Analyst and a FOIA Attorney for two Washington D.C.-based positions. You can find more details here and here.

The Sunlight Foundation is looking for a Director for its Web Integrity Project. From the website: “The Web Integrity Project’s mission is to monitor changes to government websites, holding our government accountable by revealing shifts in public information and access to Web resources, as well as changes in stated policies and priorities.” Apply here.