In the latest release from the Special Inspector General for Afghanistan Reconstruction, the agency found that recent U.S.-funded economic development projects in the Middle Eastern country have been largely unsuccessful and with little to show for the $823 million appropriated to the Task Force for Business and Stability Operations, a temporary organization tasked from 2010 through 2014 with executing economic development projects in Afghanistan.

In all, according to the internal watchdog, over 80% of the funds provided to TFBSO were in turn awarded in contracts; a little less than half of this ($316.3 million) went to contracts actually directly-related to projects in Afghanistan, and of this, only $70 million worth successfully provided the deliverables they were obligated to by contract, roughly 8.5% of the total appropriated amount to the agency. As SIGAR notes, even this can’t be taken at face value, since being able to check off that the project was completed is quite different from being able to call it success.

Though TFBSO, in particular, no longer exists, part of the usefulness of reports from SIGAR and other IGs is in its ability to inform future, similar endeavors. According to the report, this effort, for one, should not be emulated for many reasons, not least of which is that, from the beginning, the TFBSO was slow to develop a strategy for how it would actually support economic growth in the difficult, conflict-ridden area.

Without a plan for how it would get the job done, a conflict-causing attitude, and a failure to coordinate with other U.S. agencies in the area, TFBSO, according to SIGAR, failed to complete many of its project goals and provided no opportunity for others to do so. Even the IG’s ability to assess the damage was severely limited because the agency’s records were also poorly-handled.

As a helpful reference, SIGAR also provides a breakdown of the contractors that were not able to achieve their obligations under contract … 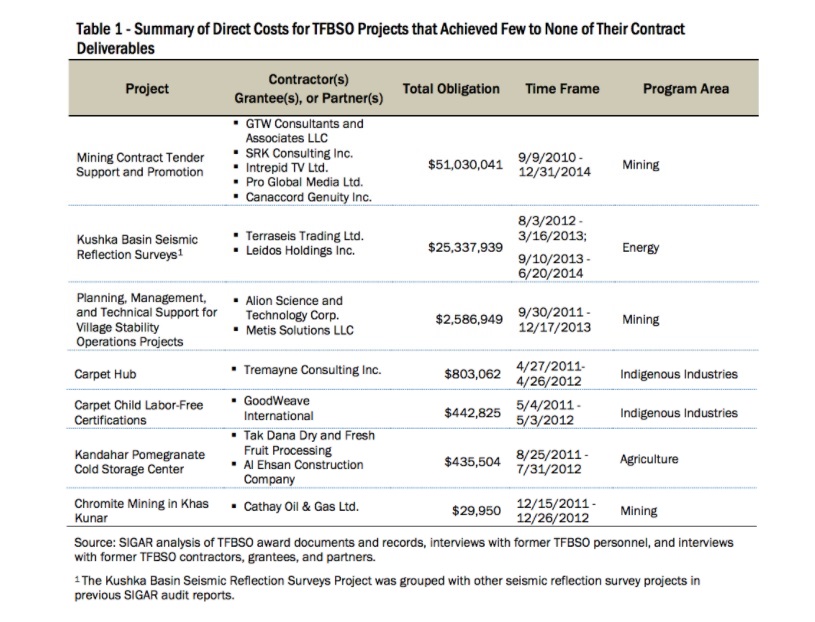 as well as a list of those involved in contracting with TFBSO.

The report is embedded below, and other SIGAR assessments of U.S. efforts to support and rebuild Afghanistan, can be found on SIGAR’s website.

Image via U.S. Department of Defense