Giving federal authority to local police departments is a dicey endeavor to begin with, but when even the top lawyer in the state decides the rules governing the scope of that authority are irrelevant, the situation is made even more dangerous for immigrants, or for anyone who might be racially profiled as immigrants.

In New Jersey, the Attorney General (AG) has been quoted saying the directive regarding police cooperation with Immigration and Customs Enforcement (ICE) is “superfluous” and “out of date,” and hasn’t been legally enforced since 2008.

The AG’s office itself is not in compliance with the directive, which requires that it collect and disseminate immigration arrest data each year.

Local law enforcement agencies that have an agreement with ICE pursuant to 8 U.S.C subsection 1357(g) are empowered to act with federal authority. These police departments are known as “Section 287(g) agencies.” Local police departments with these ICE contracts are supposed to make monthly reports to the Division of Criminal Justice regarding immigration arrests, in order to ensure that they are adhering strictly to the law in its treatment of immigrant arrestees.

The directive orders that anyone arrested for an indictable offense, or for driving under the influence, be asked about their “citizenship, nationality, and immigration status,” if the police have reasonable suspicion to believe that the person does not have legal status. If the police find that the person is in the country illegally, they are required to report the arrestee to ICE, unless otherwise directed by the County Prosecutor’s Office or the Director of the Division of Criminal Justice. 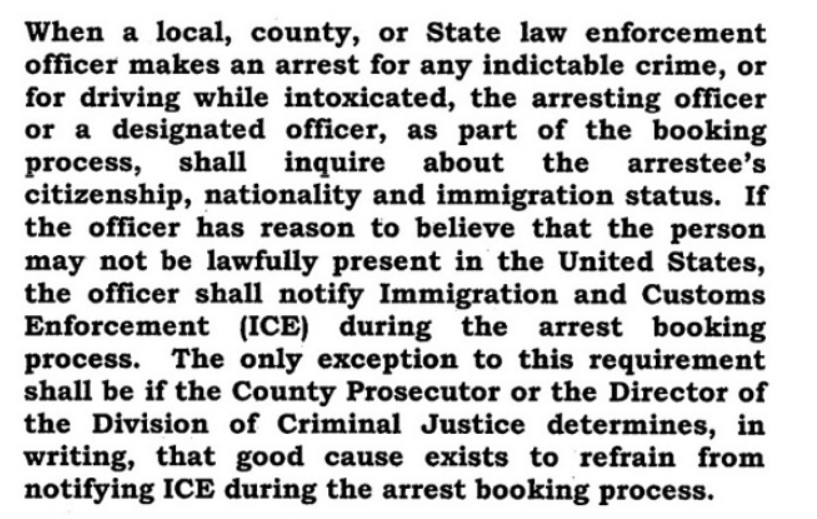 The respective County Prosecutor offices are required to report the number of undocumented people arrested to the AG’s Office, so that an annual report on the numbers of immigrants arrested and/or deported may be produced.

However, according to local news reports the state has only produced one report since the law directive went into effect (we’ve requested all reports in order to confirm this), leaving local law enforcement left unaccountable for the number of immigrants it arrests and has deported, and creating an environment in which racial profiling could run rampant due to the lack of oversight.

In the absence of state oversight, police might also violate the part of the directive that directs them not to inquire about the immigration status of victims and witnesses. Event this supposed protection is enforced at the mercy of County Prosecutors, who can rule that anyone may be questioned about their status if the prosecutor can demonstrate “good cause.” 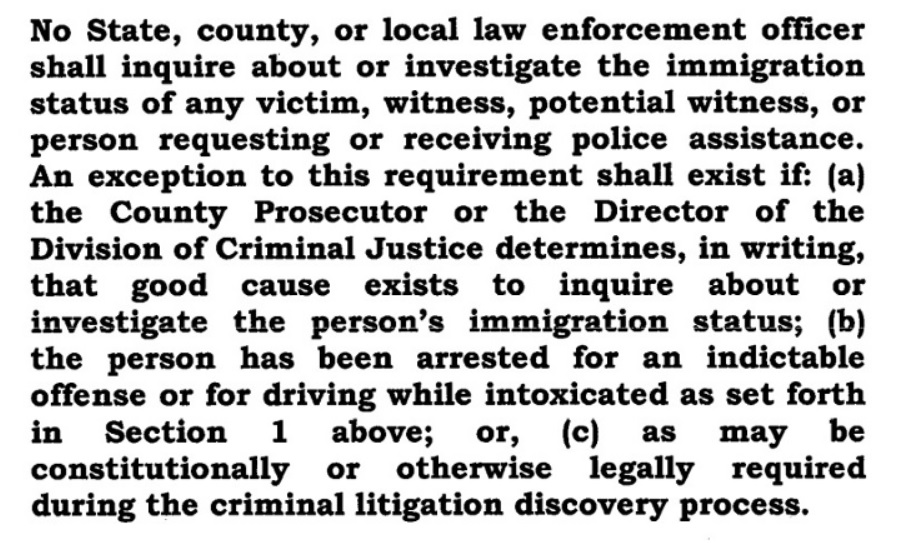 The flouting of this policy can place the lives of victims of violent crimes at risk because they’ll be too scared of deportation to report. It’s also possible that this provision makes it less likely that witnesses will be cooperative if they believe that showing up to court to testify against someone could result in them leaving in handcuffs.

In the absence of the documentation required by this apparently neglected directive, the police can treat immigrants however they’d like, and the public will remain unaware.

Read the full directive embedded below.