When Emily Hopkins requested death penalty procedures from the Utah Department of Corrections (UDC) in 2015, they were met with a rejection, and after that a denied appeal. However, whether it was the result of a new public records officer or a change in UDC policy, a request filed this year led to the release of the Technical Manual used in carrying out executions, including procedures for the firing squad.

It is a prolonged process, generally beginning at least a month before the date of execution. First the Warden forms an Execution Planning Team, which chooses members of the various smaller teams and squads who work to carry out the judgement, develop a schedule, and to secure any equipment or drugs. 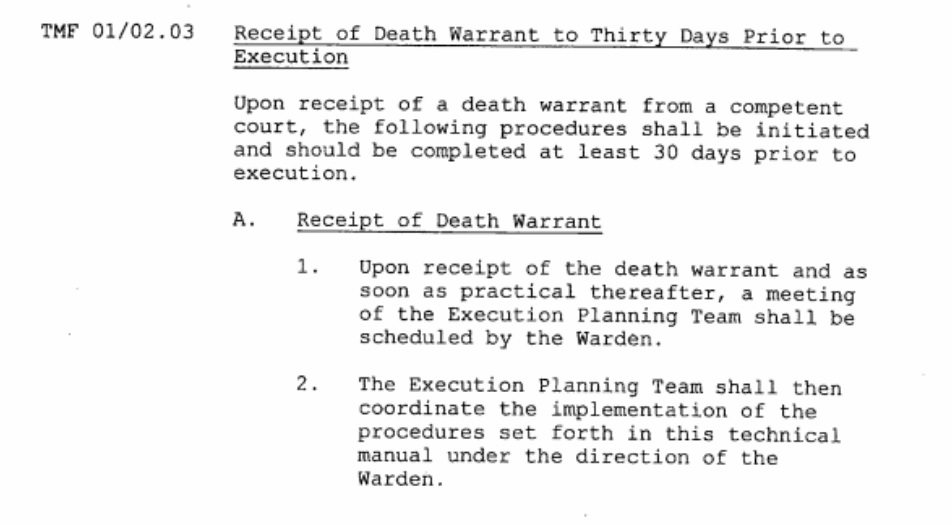 The list of witnesses to the execution must be completed a minimum of two weeks before the date of execution, and carries strict rules: the condemned may only choose five family members, friends, or religious figures to be there at the moment of death, and witnesses have to sign forms in order to view the execution. Regulations on the news media are also stringent, although after the death has taken place they are given catered refreshments for their time.

If the execution method is lethal injection, the drugs are also purchased around this time, usually at least seven days prior to the actual date of execution. Utah uses a mixture of Sodium Thiopental, Pancuronium Bromide, Potassium Chloride, and Valium.

The volunteers to carry out the lethal injection are thoroughly screened and must be phlebotomists (specialists in drawing blood via syringe), and be an actively certified medical professional with EMT experience. Three complete rehearsals must be completed before they take part in the execution. This same strictness goes for members of the firing squad as well, with volunteers required to be licensed law enforcement officers, and having to pass a firearms proficiency test where if they fail to hit the target even once with the prescribed .30 caliber rifle, they are disqualified. 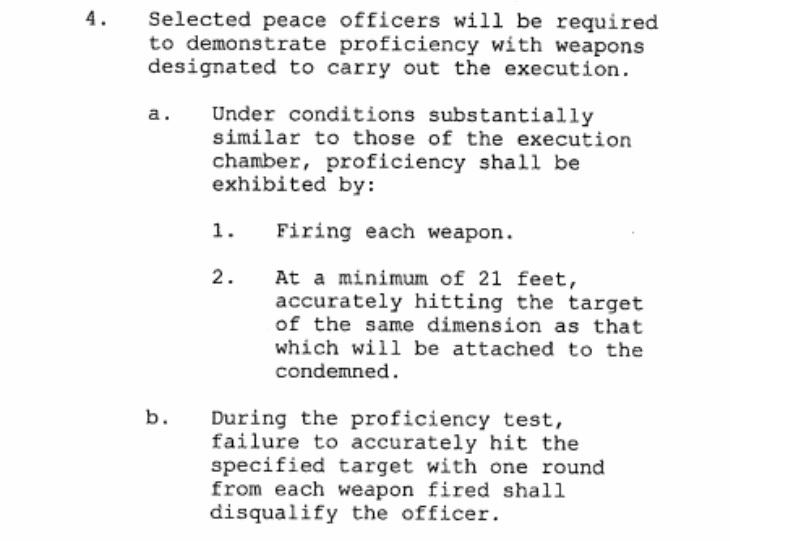 Utah and Oklahoma are the last states in the country to allow for the firing squad, though that might change. While there have only been three since the seventies, with the last coming in 2010 when Ronnie Lee Gardner was put to death, any conviction prior to 2004 is grandfathered in to allow for execution by firing squad. Utah had initially banned the practice in 2004, but in 2015 undid this by enacting an amendment allowing for a firing squad in case of the state being unable to procure the necessary drugs for lethal injection. Judging from our interview with prominent death penalty reporter Chris McDaniel, that certainly seems to be in the cards. Furthermore, all three of the next inmates on death row set to be executed by the state of Utah have chosen death by firing squad. 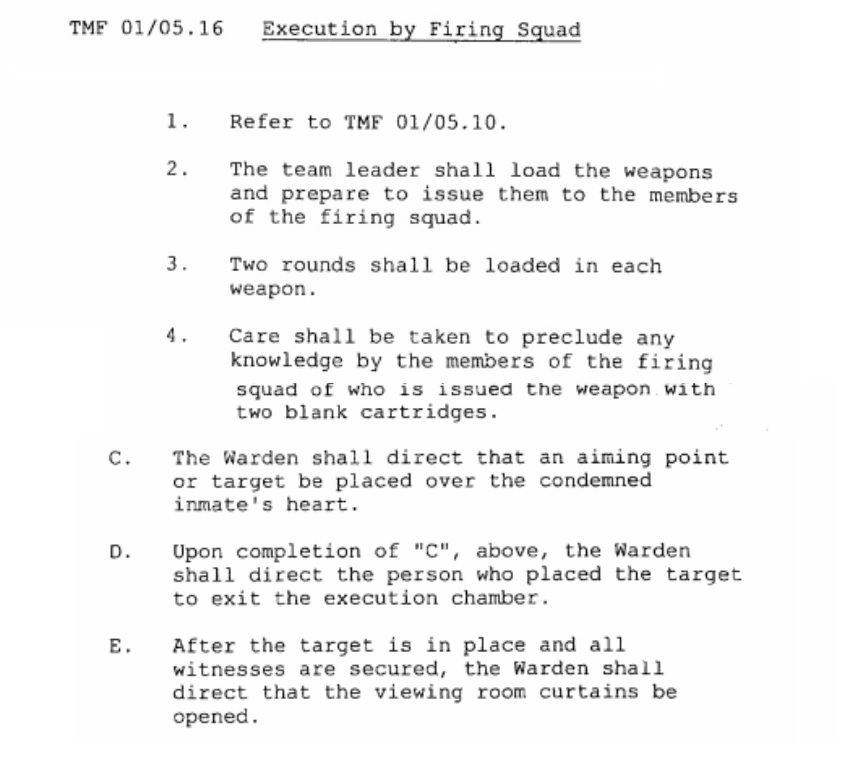 Returning to the process, after all of the briefings, system checks, rehearsals and the inmate’s last meal are completed …

the Tie-Down Team leads the condemned to the execution chamber. In the case the execution is being carried out with lethal injection, all IV’s are set in place and readied for the insertion of the lethal chemicals, and all electrodes and heart monitors are prepared before the curtains are opened and the process can begin. Before the actual drugs are injected into the body, the condemned inmate is granted an opportunity for last words, which may be cut off after two minutes or if any profanity is uttered. 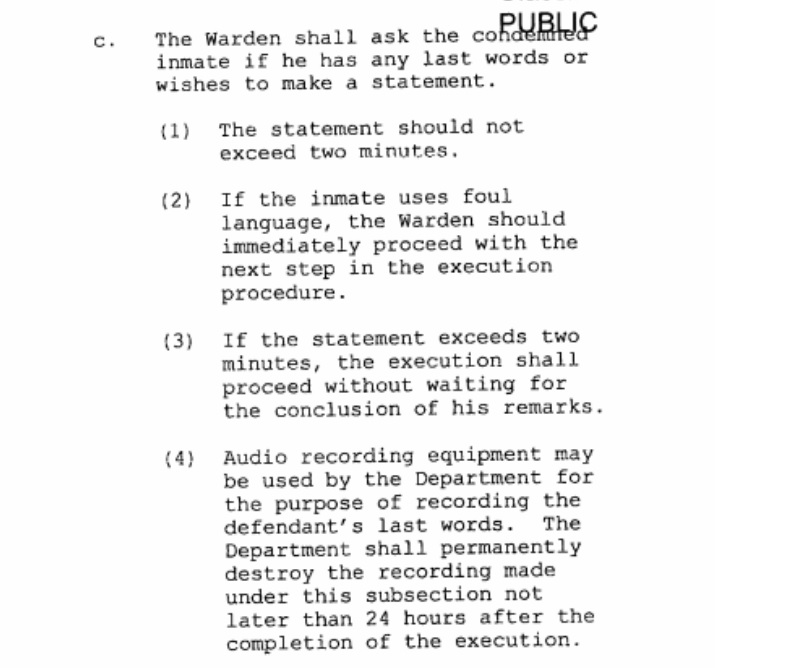 In the case of a firing squad, all rifles are loaded with two bullets, with special care taken to make sure no members of the squad are aware of who was given the rifle with the non-lethal wax bullets. A count down cadence begins, and the first volley is fired. 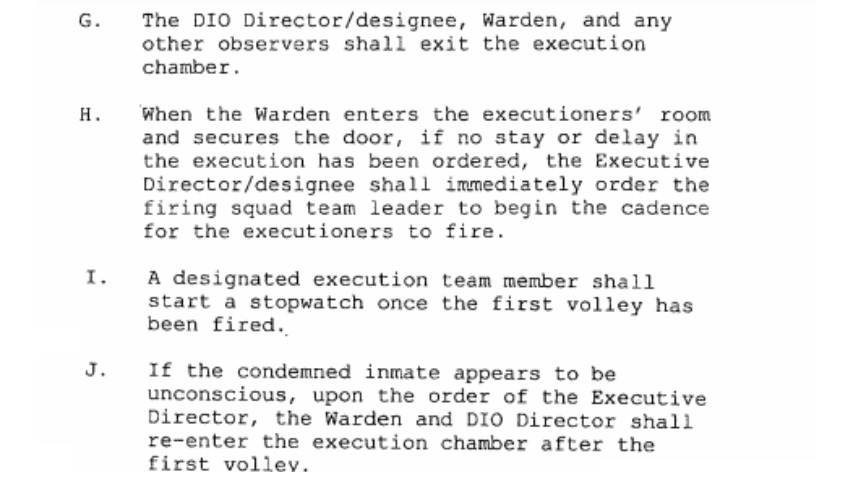 If the subject is still conscious after the prison physician checks for pulse, a second volley may be immediately readied, and fired upon the team leaders countdown. If, however, the condemned is unconscious but still shows signs of life, there must be a ten minute waiting period before they check again. If life is still present, then a second volley may finally be fired to finish the tragic affair. This is also true of lethal injection, more chemicals can only be given if after the completion of all steps and a ten minute waiting period there are still signs of life found. Considering the amount of lethal injections that have resulted in prolonged, tormented deaths, one would have liked to see a more robust policy for dealing with situations where the execution doesn’t go as planned. 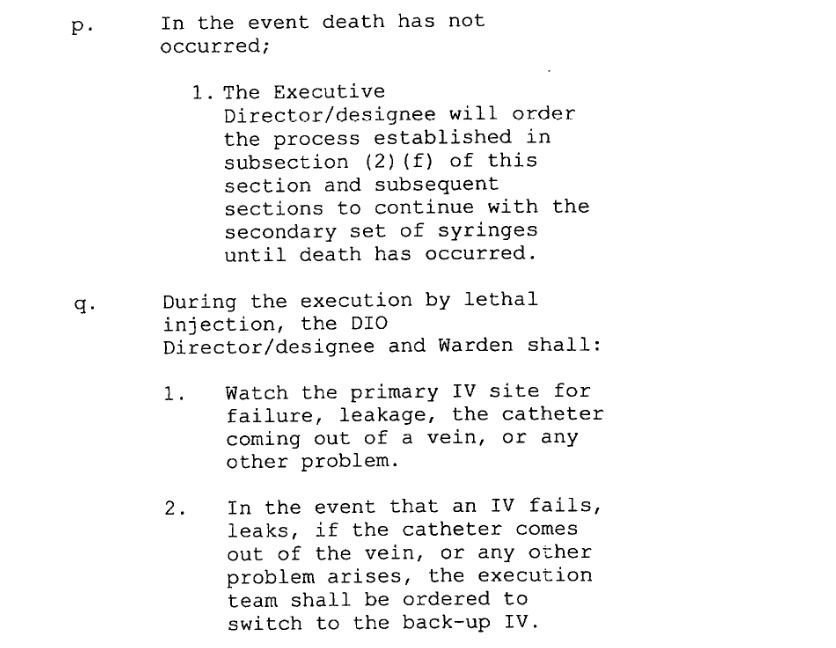 After cleaning up the execution chamber and removing the body, the work for the execution team members isn’t over. Instead they actually have to fill out forms about whether they were adequately trained or whether they saw anything that wasn’t addressed properly. Paperwork is a roundly terrible thing, and I would bet it is even worse after having to witness the death of a human being in an execution chamber, to say the very least.

Read the full manual embedded below, or on the request page