Way back in March, we awarded the title of FOIA March Madness Champion to the Securities and Exchange Commission (SEC) for their swift response to this year’s tournament. This season’s challenge was, in part, to provide us with the letters FOIA appealers had submitted to win their documents, even after they’d been handed a rejection, redaction, or delay.

In the Independence Day spirit of civic engagement and disobedience, we took a look through some of the appeals to the SEC and pulled examples of successful pushback. Need a guide to crafting your own response to some common denials from the SEC or other agencies holding back your documents? Here’s your quick how-to in the words of those winning requesters themselves.

It needn’t take much

Appeals don’t have to be extensive letters coated in legalese. In many cases, a simple statement of appeal can suffice. Look at this one:

With just one sentence, the Appeal Officer, by virtue of that position’s responsibilities, decided to remand the request for further search, no explanation necessary.

Sometimes you make a request and expect a mountain of materials, only to receive a dippy packet of mostly redacted pages.

Don’t accept that might be all there is. Sending the agency a letter with why you assume there must be more materials can often prod an additional look around.

There are plenty of reasons that an agency might want to occupy the gray area between admitting it has something and telling you the reason you aren’t allowed to have it. However, not all of these reasons are legitimate, and in situations where you have good reason to believe that they have something, the Glomar can be easily challenged. 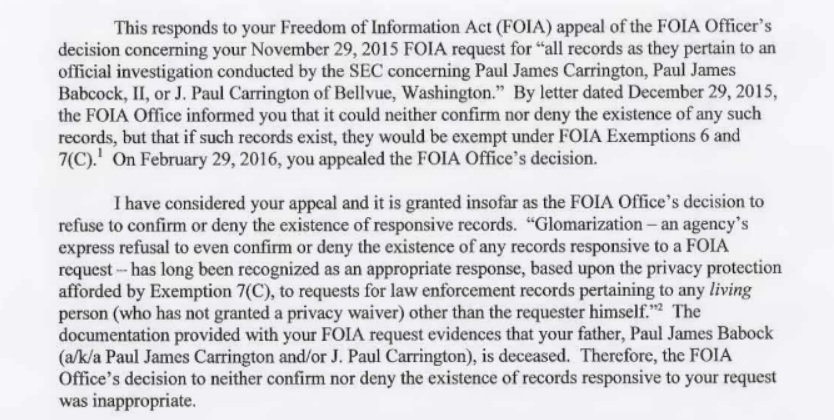 Get data in the format you want

When the SEC claimed that it couldn’t access particular information kept in a database, one requester fought back against the idea that this information couldn’t then be exported in a useful format.

The Appeal Officer agreed and informed the requester that the FOIA Office would be working to get it to him in the format desired.

Take a look at the full collection of appeals below. Have your own examples of successful appeals to federal or state agencies? Let us know!

Image via the SEC