For the last month, 64 federal government Freedom of Information Act agencies have been waging noble battle for the title of Most Responsive Agency 2017. It’s been four weeks of phone conversations, follow ups, and frustratingly close calls, and now we’re ready to announce the champion of this year’s match-up.

But first, a few things.

FOIA March Madness began on a whim in 2016. Synced up with the similarly-named springtime college basketball tradition, we submit the same request - one that addresses materials each agency should already keep and that the public would find handy - to each slotted agency. And each week, we advance the FOIA office in each bracket match-up that has provided the most complete, timely response thus far.

This year’s request was related to appeals.

Whenever a federal agency rejects, redacts, or fails to fully respond to a FOIA request, the requester has the option to appeal the decision. As part of this year’s March Madness, we wanted to learn more about the frequency with which agency decisions are challenged and the language successful requesters use to make their cases. 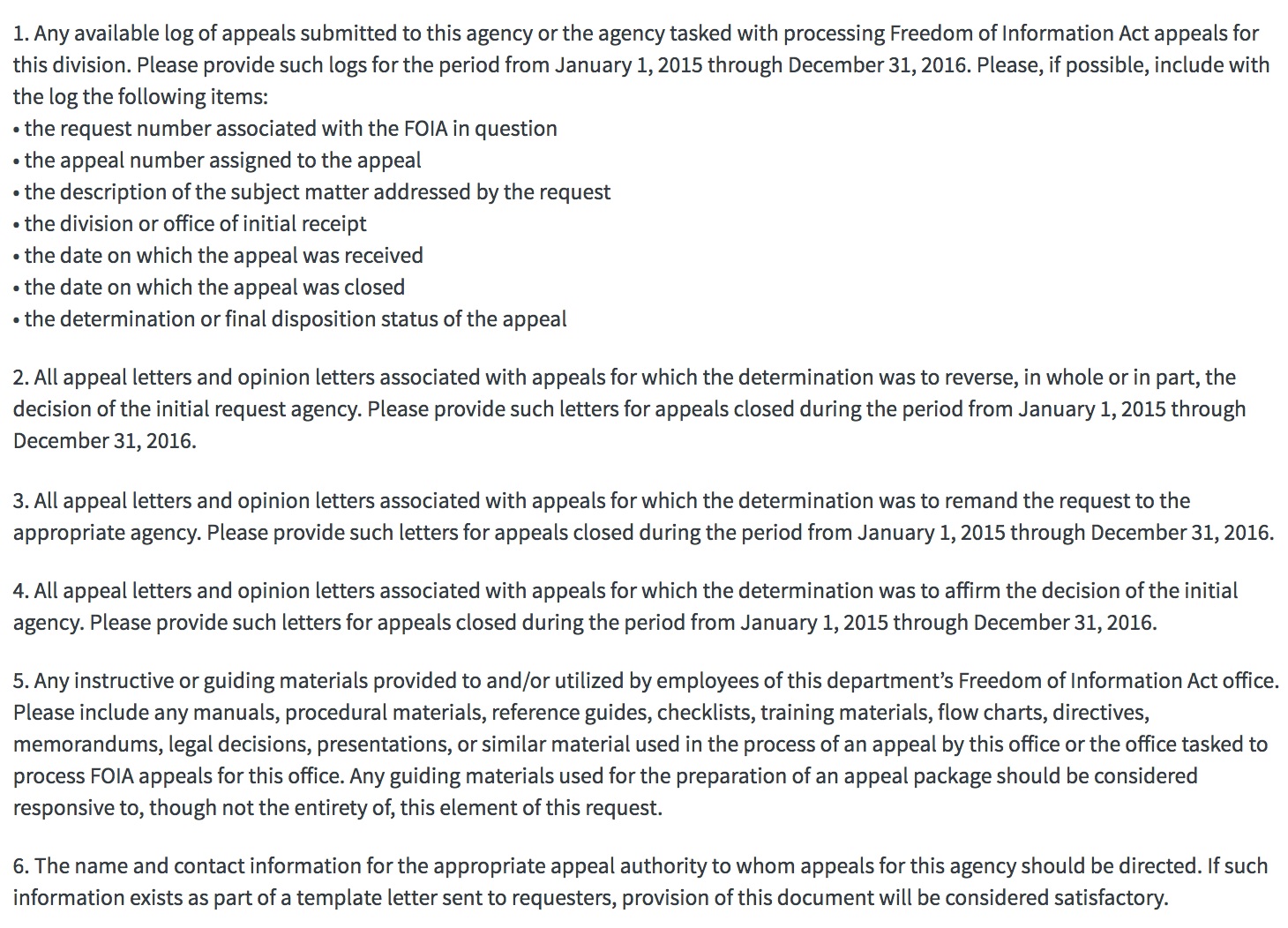 We divided our contenders into four categories roughly organized by genre of mission: monetary and financial issues, law enforcement, infrastructure (governmental and transportation), and survival under the new administration (which obviously included a range of candidates and isn’t particularly reflective of the good, important work some of these do on a regular basis but does warrant a segment of its own, we decided). It’s not strictly scientific but neither is FOIA.

As usual, the disparity between agencies and appeals quickly became apparent during this year’s competition. Some agencies receive no or only a handful of appeals each year - others receive hundreds. Certain agencies are set up to respond to FOIA communications as soon as possible; others have yet to acknowledge our inquiries. And in the race to the finish, anyone willing to get on the phone and talk out their confusions is going to fare more favorably than those that take the strong and silent approach.

Valiant efforts - worth noting but not quite worthy of a win - were made by the Department of Energy and the Department of Health and Human Services, which responded on behalf of eight separate offices, some of which weren’t even competing and one of which won its division as a result of the agency’s work.

Last week, we announced the final contenders in each category.

Armed Services Board of Contract Appeals

But who among them proved to be this year’s Most Responsive FOIA office?

The Securities and Exchange Commission!

It was a painfully-close call between the ASBCA and the SEC. However, the same week that the ASBCA let us know that they don’t receive all that many appeals and that the ones that are submitted are sent elsewhere, the SEC presented us with hundreds of pages of appeal determinations. Thorough, prompt, and extensive, the SEC’s release helps bring us that much closer to understanding the appeals process and how to make the most of it.

And who among our wonderful readers correctly guessed this year’s champ?

Well, unfortunately, no one. Those agencies that disappointed their audiences were: OSHA, USDA, FCC, Department of Labor, IMLS, Department of Education, GSA, Amtrak.

Two readers, however, did correctly choose ASBCA to win the “Protect Ya Neck” bracket, and another two correctly chose CDC to take the “Thrift Shop” division. Each of them will find another five requests added to their accounts.

Many congratulations to the SEC and all those who played! We hope to see you bring the heat again next year. 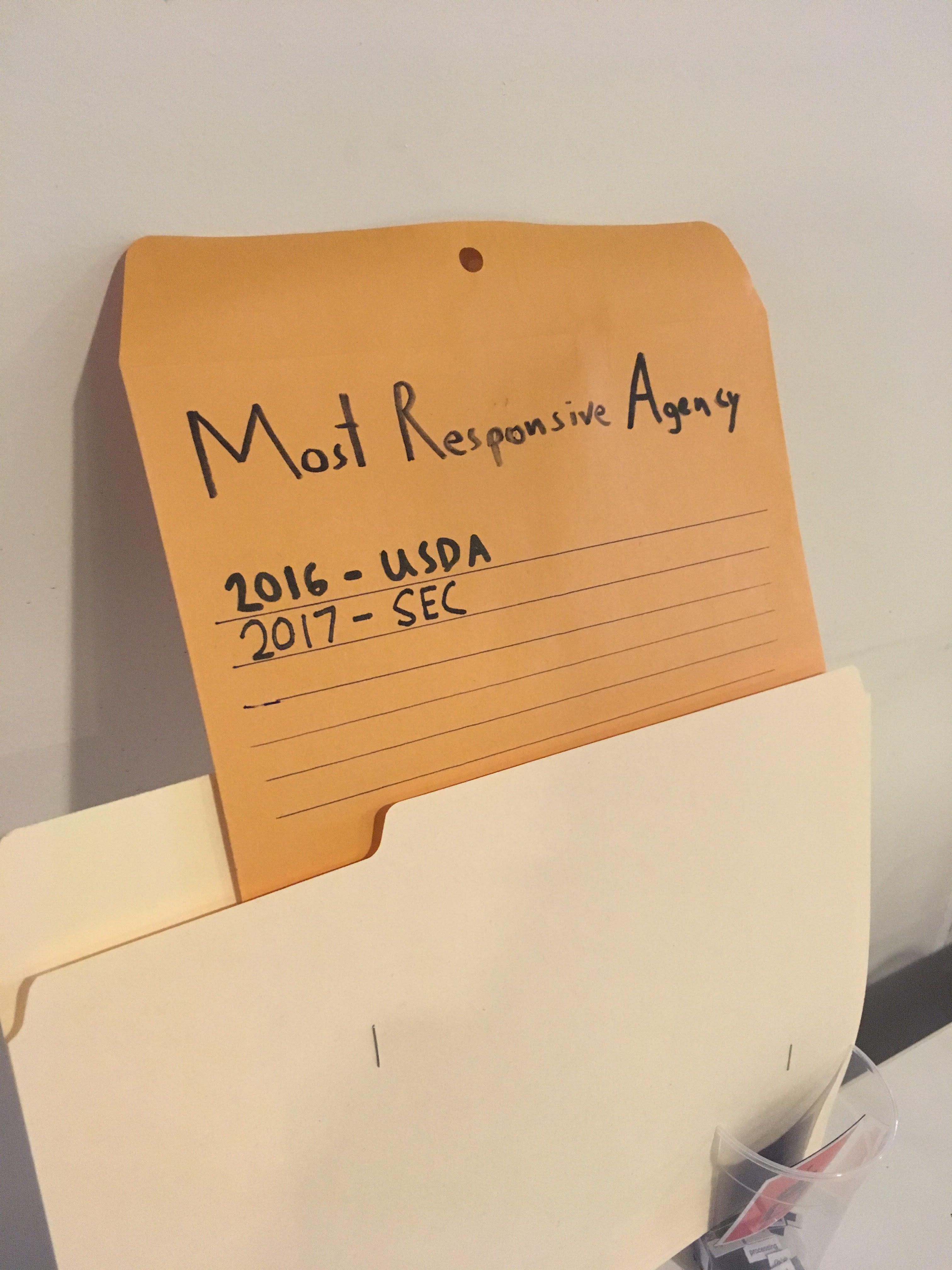 (Oh and CIA, you still haven’t acknowledged our request from 2016.)