Outgoing President Barack Obama promised a “smooth and efficient” transition, including in-depth briefings prepared by each agency for the incoming Donald J. Trump administration. That meant a lot of FOIA-able material, and after we filed dozens of requests for transition materials, the Environmental Protection Agency was one of the quickest to respond - just before the agency was gagged by new administration rules .

What the agency provided is a broad overview of the agencies responsibilities and recent action, including its broad regulatory agenda to evaluate potential pollutants and protect the public from them.

Recent regulations are particularly open to being rolled back; rules not finalized until May or June can be reversed through the Congressional Review Act . Not surprisingly, then, recent regulatory updates comprise the bulk of the transition documents release.

Unfortunately, since this is FOIA, that release is in the form of a poorly-printed PDF: It’s browsable, and there’s some basic OCR, but it leaves a lot to be desired if you want to take a look at what regulations might quickly go up in smoke.

Fortunately, EPA rules are also browsable on a separate website .

The release also includes various org charts. Again, nothing particularly new, but useful for getting up to speed: 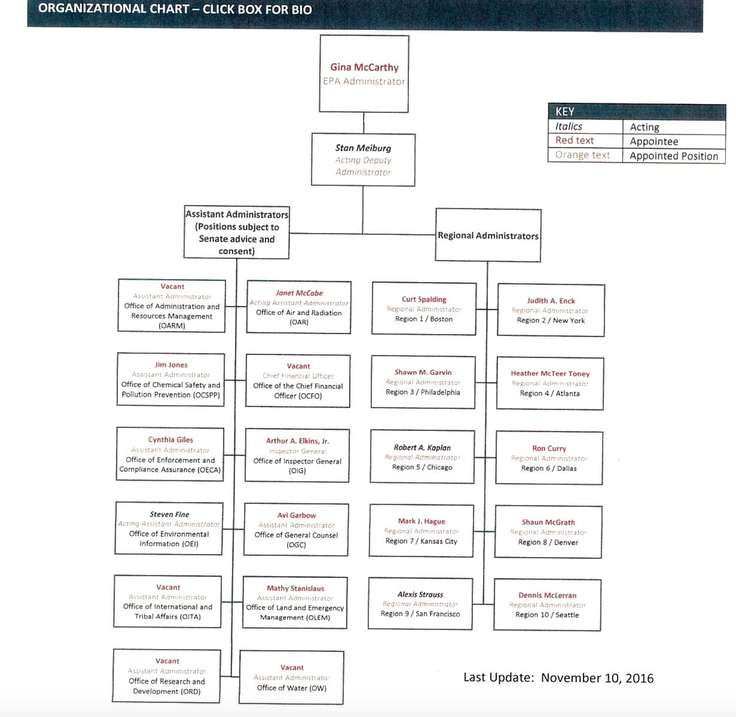 Things get slightly weirder with a list of highlighted links. There isn’t any information in the document to suggest why they are marked off; presumably, the agency thought they would be good resources for incoming appointees.

Whatever the case, most of the links still work:

A few of the links are cut off and so give 404 errors if you put in the partial URLs. But two of the URLs redirect. Maybe it’s a coincidence, but those are also the only two URLs to include the word “climate” in them. The now defunct links:

There had been a number of reports that the Trump administration was ordering an end to climate change information from the EPA, but oddly at least one of the links was nuked before Trump even took office, according to the Internet Archive.

The “Regs Heavy Duty” URL used to provide this page, but apparently it was deprecated before the election even took place. I couldn’t find any trace of the first link, either in the Internet Archive nor on Google Cache.

One other interesting aspect to the release: What’s not there. While I asked for briefing materials created for the Transition Process, it sounds like the EPA created a lot more than it provided in my admittedly narrow request.

Bloomberg got a copy of a memo regarding “10 Things You Should Know” about the Transition, which in turn links to an entire Transition Intranet page at http://intranet.epa.gov/transition/ - one that will certainly be worth FOIA’ing on its own.

Read the EPA’s full release embedded below, or on the request page.