Among a week of chaos and turmoil in the news cycle, the United States government quietly released a 140-page document, marking an important first in the fight to eliminate the rape kit backlog.

“National Best Practices for Sexual Assault: A Multidisciplinary Approach” delineates 35 recommendations for every step law enforcement and medical professionals should take in the aftermath of a sexual assault. It is the first time the government has released a comprehensive set of guidelines and, while it is a huge step in the right direction, it is important to note that that’s all these are – guidelines.

The SAFER (Sexual Assault Forensic Evidence Reporting) Act was passed in 2013 as part of the reauthorization of the Violence Against Women Act. It’s goal was to create standardized practices for timely rape kit testing, and fixing the many problems with the current systems in place – namely, that kits aren’t tested in a timely manner (if they’re ever tested at all) resulting in a considerable backlog. Out of that Act came the SAFER Working Group, which combined authorities from local police departments, the FBI, state crime laboratories, government institutions, colleges, medical examiners, nurses, and more. The group met for more than two years, penned this list, and then took recommendations from the public. But no matter who well thought out and well intentioned, this one line at the end of the introduction cannot be overlooked:

This isn’t meant to overshadow the importance of what this document does. For the first time, the federal government has provided a solution to the country’s overwhelming backlog of untested rape kits. This is a big deal. Currently there is absolutely no standardization across state lines regarding how to perform a sexual assault evidence exam, when to test rape kits, what rape kits to test, and how to respond to the victims. This only allows the backlog to continue to exist and to grow. Recommendations like laboratories using standardized reporting templates and a national sexual assault kit that meets minimum standards, would fix this.

Aside from best law enforcement practices for investigations, the list includes important guidelines on maintaining a victim-centric approach and ensuring proper training for those administering exams. 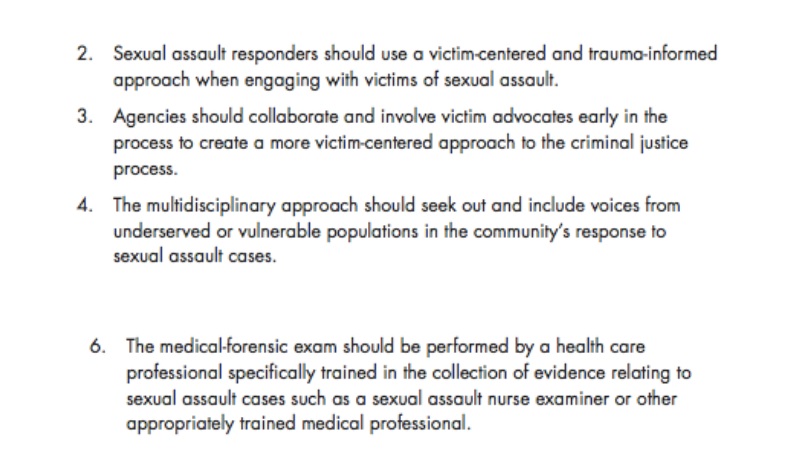 It also recommends a victim notification system, allowing survivors to know the status of their cases, even years after the crime happened. This is one of ENDTHEBACKLOG’s six pillars of reform.

This document is undeniably a great thing and a step in the right direction - but will local law enforcement agencies and state and private laboratories implement these recommendations?

Image via National Institute of Justice