After publication, David Bixenspan pointed out that there were two pages missing from the FBI’s release, which officially closed out the JDL angle as unsubstantiated. You can read those pages on The Smoking Gun.

On September 7th, 1996, rap icon Tupac Shakur was gunned down in Las Vegas by unknown assailants, leading to one of hip hop’s greatest mysteries: who killed Tupac?

While the Las Vegas Police Department launched their own, ultimately unsuccessful investigation into the murder, Shakur’s FBI file, first released in 2011, reveals that the Bureau had begun an inquiry of their own as early as October.

What’s more, the FBI investigation linked the shooting to a larger criminal conspiracy involving the recently deceased Eazy-E, who along with Shakur had been receiving death threats. 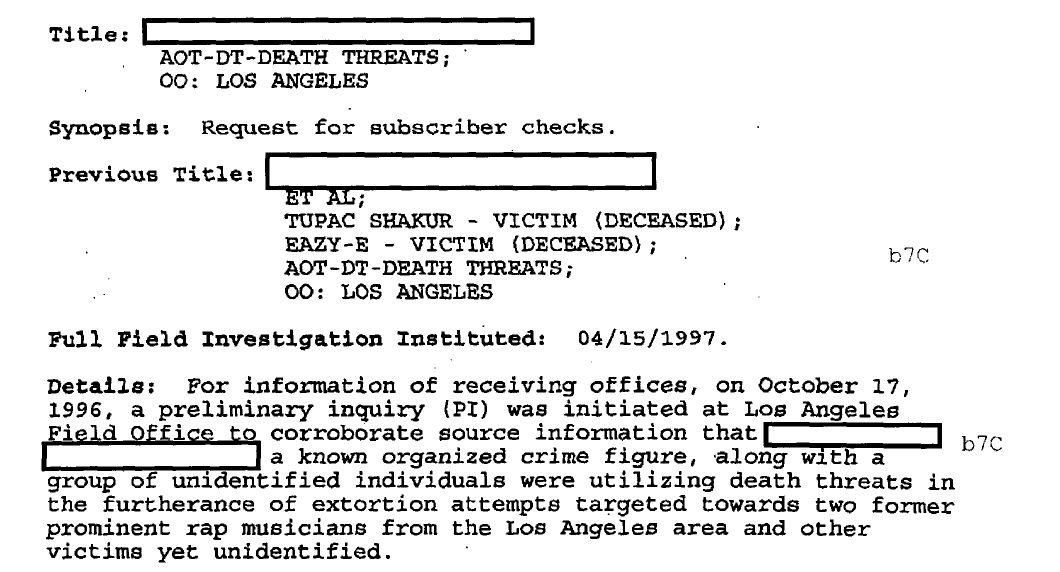 The Bureau had first been tipped off about the extortion scam via an unnamed informant on September 11th, 1996 - just a few days after the shooting, before Shakur had succumbed to his wounds. The informant also identifies one of the groups involved as the JDL.

In case you were wondering, yes, it’s that JDL - the Jewish Defense League, a right-wing Zionist organization identified by the Southern Poverty Law Center as an extremist group and by the FBI as domestic terrorists.

As for what interest the JDL had in the rappers, at first the Bureau believed the motive to be primarily financial - a simple shakedown.

But as the investigation continued, things started to get a bit murkier. First, there was the issue of whether these extortion efforts were part of some larger funding campaign by the JDL …

and then, gradually, evidence started to come in linking the threats to the infamously-contested ownership of Ruthless Records …

and, finally, there was the implication that Shakur’s death specifically might have been part of a financial retaliation against Death Row for poaching talent from Ruthless.

So what did the FBI do with this compelling case it built up? Not a whole lot, though it’s not clear why. Months in, the investigation stalled, and interviews gave way to newspaper clippings and printouts from the Tupac webring.

Which, to give credit where it’s due, are impressively annotated by no doubt the most dedicated agent in the Bureau.

By July of 1997, the whole thing had dried up, until an exciting new lead threatened to blow this whole thing wide open…a profile of Shakur in the New Yorker by staff writer Connie Bruck.

The Los Angeles Field Office request requested to interview Bruck, and while it’s unclear if the request was ever granted …

one thing is certain: as far as the FBI is concerned, this mystery remains unsolved.

Image via Consequences of Sound