“For one thing let me introduce myself. My name is Mr. Russell Jones.” - “Intro,” Return to the 36 Chambers.

Mr. Russell Jones. Maybe the name doesn’t ring any bells for you. On February 3, 1999, when the Federal Bureau of Investigation first ran their records on him, there were over a thousand people that made that match. In New York, there were 196. Another 164 of them turned up as living nearby in New Jersey. Perhaps you’d recognize him by another name. After all, there was only one Ol’ Dirty Bastard.

And thanks to a 2011 request by Rich Jones (no relation), ODB’s pockmarked record was released to world.

When the FBI closed his file on March 5, 2005, it’d been nearly six months since a drug-induced accident took his life. He was born on Friday, November 15, 1968 - 47 years ago this week - and initially, the FBI couldn’t find anyone with that name and birthday.

Mr. Jones surfaces as part of two investigations. The one in which he was listed as a victim began in August 1999.

But ODB had been on the Department of Justice radar since much earlier that year. On January 28, 1999, the Assistant Director in Charge (ADIC) of the FBI’s New York Office sent a request to the NYPD. He wanted the criminal record of: “Name: Russell Jones; Also Known As: Ol’ Dirty Bastard; Address: member of the WuTang Clan.”

The report, nine pages long, detailed a list of run-ins with the law beginning on April Fools’ Day 1987 with a charge of petty larceny, a Class A misdemeanor.

The last entry is from January 15, just two weeks before the FBI put in its official request.

The same day they queried the NYPD, the ADIC, New York also requested information on Dirty from the FBI’s Butte Information Technology Center. A week later, someone in Montana woke up bright and early to run ODB and his DOB with no success.

The Feds continued to check in on him as part of an investigation on the “Wu-Tang Clan Organization,” which had begun with the Staten Island murder of “Known Wu-Tang Clan Associate,” Robert “Pooh” Johnson, a 23-year-old black man who two years before “was victim of Homicide by multiple gunshot wound.” 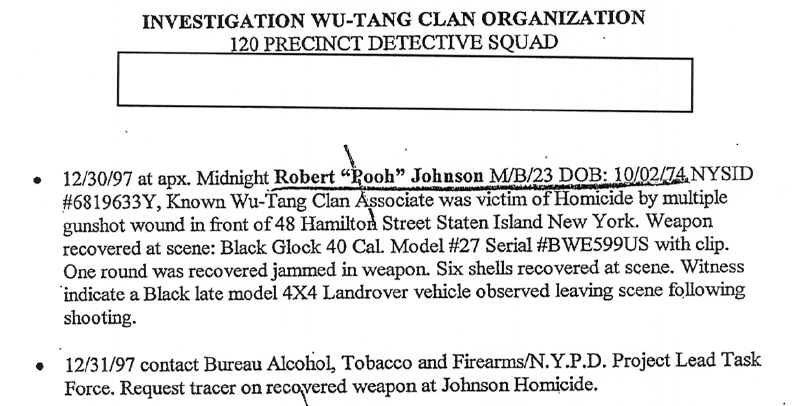 A lot is redacted from the Wu-Tang timeline. The bullet points that aren’t blanks are rife with even more gunshot wounds. 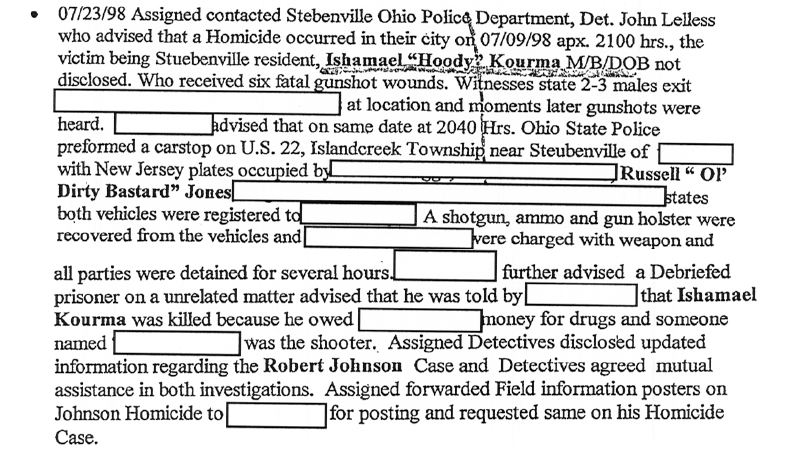 Nearly a page is cut out from the time he “was involved in shoot out with N.Y.P.D. Police Officers” until his LAPD arrest on February 17, 1999 for possession of body armor. 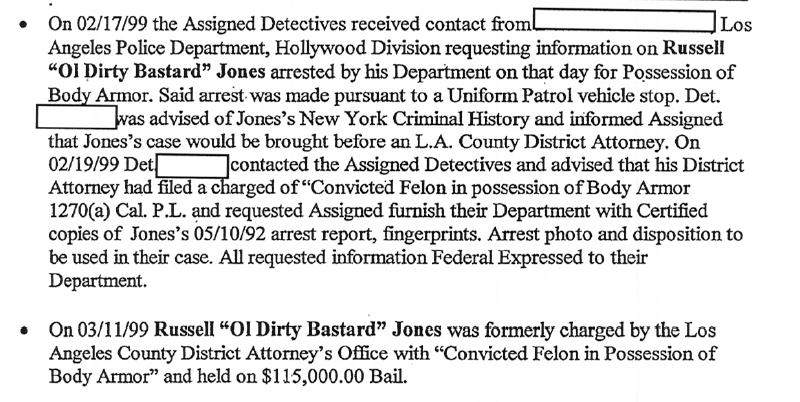 The FBI continued to monitor the WTC for the rest of the year via the NYPD 120 Detective Squad. The collection of records they provided are like a game of “Wu-Tang Mad Libs”: Insinuations, Subtle and Otherwise.

However, in September, ODB’s lawyer Peter Frankel spoke with two representatives of the NYPD, and he set up a call with his client who was in a rehab program in California. By the end of the month it surfaced that Mr. Jones had been the victim of a series of burglaries.

At the beginning of November, agents eager to make forward movement in this case flew to speak with JONES in Los Angeles. In his interview at Pasadena’s Target Program Rehab Center, he described an incident in which he woke up “gun in face,” was robbed and shot, and eventually drove himself to the hospital.

But by the next year, the FBI had furthered its investigation into the WTC, compiling a list of their known businesses and working in cooperation with a number of other agencies.

ODB suffered a series of cash seizures and in 2004, the investigation related to the Wu-Tang Clan generally was moved to a different division. In ‘05, the Americas Criminal Enterprise Sections (ACES), Safe Streets and Gang Unit (SSGU) closed the case on the “organized gang which was committing robberies of rap industry figures in New York City.” They cited “a lack of investigative merit.” ODB was already dead.