Senior executives within the Veterans Benefits Administration misused incentive programs to benefit themselves, an Inspector General report shows. Two officials went so far as to pressure subordinates into accepting unfavorable transfers to create vacancies for themselves.

An anonymous source alerted authorities to one senior VBA executive’s $274,019 expenses for moving from Washington D.C. to Philadelphia, a distance of 140 miles, in October 2014. A subsequent Inspector General investigation has uncovered abuse of incentive systems within the Veterans Benefits Administration available to senior-level executives and has resulted in two requests for criminal prosecution to the US Attorney for the District of Columbia.

The investigation indicates that VBA avoided freezes to executive pay by allowing employees to transfer. These transfers sometimes came with incentive bonuses, even when no incentives were necessary to fill the position, the Inspector General has determined.

In total, the Veterans Benefits Administration paid more than $1.3 million to pay the moving costs of 23 senior administration executives over two years in what the VA Inspector General calls a “program to benefit the [Senior Executive] workforce.” The program allowed senior executives to increase their pay after transfer at a time when salaries for senior management had been specifically frozen. Annual salary increases totaled $321,000. As well, some senior executives were granted bonuses in the form of incentive payments upon transfer, a total of $140,000.

What specifically caught the IG’s attention was the reason for these transfers - at the end of 2013, national-level VBA executive, Diana Rubens, decided she wanted to move to the Philadelphia office and take over as director, a position two ranks below the one she was then occupying. Unfortunately for Rubens, the position was more than adequately filled by one Robert McKenrick.

The Los Angeles Regional Office was at that time seeking a director. The office had gone through several rounds in its search, when Ms Rubens stopped the process in its tracks. She immediately fingered McKenrick for the position, later telling the IG that he had expressed interest in the job, and “it would be good for him and his family to relocate.” McKenrick remembers the conversation differently:

Yet even before McKenrick’s transfer had been sent through, and unknown to him, Rubens was openly discussing her interest in the Philadelphia job. In April 2014 she began preparing for the move to Philadelphia by having her home appraised, and on May 6, 2014 she was approved to take over the Philadelphia position. McKenrick was approved for the Los Angeles position six days later.

Three weeks later, as the VBA transfer gears creaked to life, Rubens threatened to gum up the works. She said she would refuse the Philadelphia assignment (which she had already accepted) unless she received more transfer incentives. She got them on the same day. 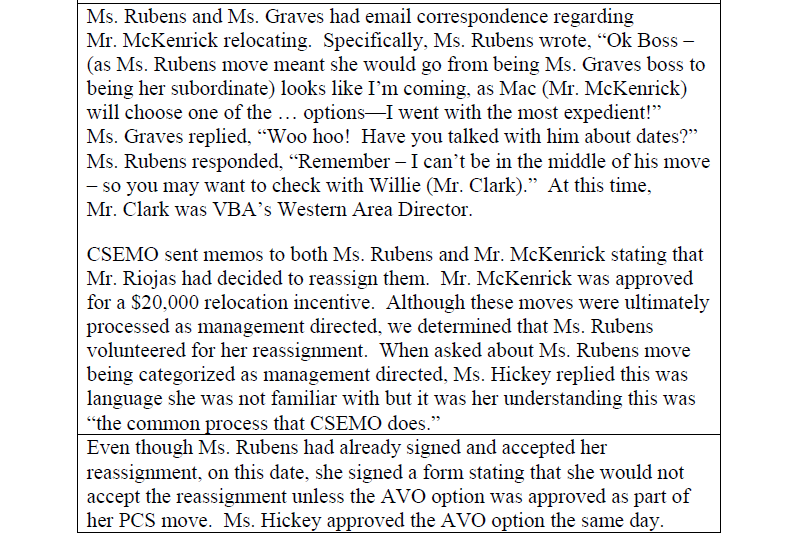 While Rubens was clearing McKenrick from the Philadelphia position, one of her subordinates, Kimberly Graves, was allegedly seeking to move to Minnesota to be closer to her mother. Graves contacted Antione Waller, the director of the St Paul Regional Office, to ask her a simple question: What would you think of moving to Philadelphia?

Waller was interested, if the position in Philadelphia came open. It did come open, of course, but he was never a serious contender for the job. Yet once his name was in for a transfer to the east coast, it was easy to finish the bait-and-switch. Instead of the Philadelphia position, Waller’s name was put in for the Baltimore director’s position, which another senior VBA executive said would “suck the last ounce of blood” from whomever took the job.

No matter that Waller had no interest in moving to Baltimore, that St. Paul position was now open for Graves, and she took it. Waller was assigned to Baltimore on July 14, 2014. Four days later Graves sent her resume to the VBA Deputy Chief of Staff to be considered for director of the St. Paul Regional Office.