Eternalized as the familiar face of Burt’s Bees personal care products, Ingram Berg Shavitz was the subject of a recent documentary entitled “Burt’s Buzz,” which explored his life as a mild-mannered bee keeper in Maine. In his youth, Shavitz lived and worked in Manhattan and took photographs for Life and Time during the 1960s.

According to documents recently released by the FBI, the quiet, contemplative hippie depicted on chapstick nationwide had several turbulent run-ins with the Polish government in 1963.

The report begins with a note filed via Airtel describing Shavitz’s October 28th trip to Warsaw where he was detained and his film was confiscated. He also cites concerns over the loss of a tie clip and is encouraged to contact Polish Customs. The report quotes Shavitz as being confused as to why his film would be of any interest to the Polish government because “one group was of Cardinal Wyszynski saying mass and others of coffee shops etc.”

For context, the file includes a 1955 “office memorandum” sent to the director of the FBI regarding Shavitz’s membership in the “Great Neck Peace Forum,” which “has several known Communists among its members.” Despite his ties to this organization, the memo states that Shavitz “appears to be a normal young man of good habit.”

With his past connection with “known Communists,” the SAC in New York subsequently filed an interview request which was granted with the understanding that “he should be approached as a loyal American citizen.”

Apparently the FBI agreed that an “interview is desirable.”

What follows is a series of redacted correspondences between the FBI and the SAC in New York trying to corroborate Ingram (soon changed to Burt) Shavitz’s whereabouts during his time in Poland. The name change seems to have caused the Bureau a certain amount of confusion but after several credit checks and telephone number verifications they consolidate his records.

Then comes the complete interview write up which could easily be a lesser known James Bond film.

Questioned on 2/8/64 by William J. Groves Jr and Thomas J. Muldoon, Shavitz recounts his entire stay in Poland. Shavitz had organized a trip to Yugoslavia to do a “picture story” for the New York Times but was instead drawn to Poland following an acquaintance’s suggestion.

Shavitz struggled through the visa application process but followed the instructions given to him by various travel agencies and departments and ended up in Poland with no issues. The report goes into detail about everyone he met with during his stay in Poland including an American exchange student, an actor “who claimed his father is the Polish Ambassador to Australia, and “an American Negro living in Warsaw.”

On the third day of his visit, Shavitz was taken in for questioning by “two or three very well dressed men,” who “identified themselves as police officers.”

These men confiscated his film (which was later given back to him) and cancelled his visa urging him not to contact the American Embassy.

After a particularly trying day being questioned by the Polish, Shavitz “met an attractive girl … later accompanying her to her home.”

He spent the next morning taking photographs of the Cardinal but was soon advised by the American Embassy to leave Warsaw. That night at the airport, his film was confiscated again by a Polish customs officer. He attempted to contact the American Embassy but they were in the process of moving and did not respond. During this time, his scheduled flight left without him. Without a flight home, Shavitz drove out to the Embassy, jumped the gate, and was driven back to the student center by an embassy official.

At the center he was questioned again and noted that “ten men had been sent in to detain him.”

Shavitz then attests that several of the individuals who he encountered during his stay in Poland (a woman who validated his passport and a man who detained him four days ago) were among the group of questioners. 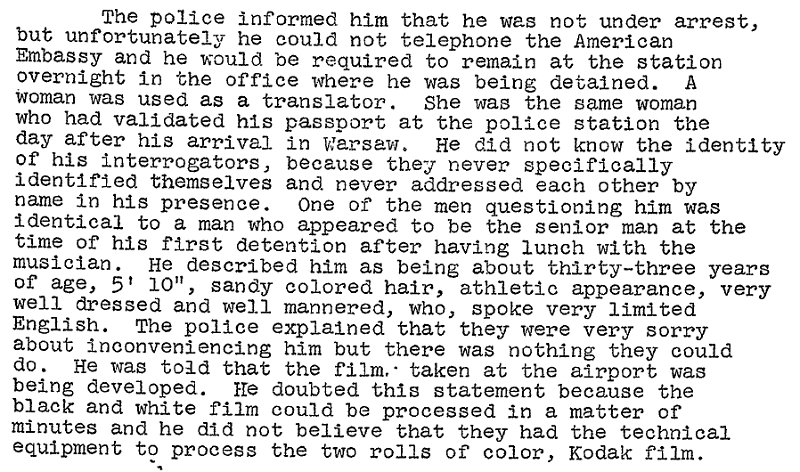 He says “four hard wooden chairs were brought into the room for him to sleep on,” and he was not allowed to leave the room until 2pm the next day.

The American Embassy meanwhile had apparently tried to contact Shavitz at his hotel but, when no one answered the phone, they assumed he was fine and not being detained in a room where “the light was left on all night and one man remained to watch him.”

Finally, Shavitz got in contact with an American official who helped him board a plane to Yugoslavia at the same time that Walter Ulbricht was landing in Poland.

He then vacationed around Europe taking more photographs with no issues and eventually made his way back to the US. During his debrief, Shavitz said “the Polish police probably did not like the pictures he had taken.”

He also noted that back in Warsaw he had left a tie clip that had sentimental value, and which he was currently trying to recovered through a contact at the United Nations.

The last note made by his interviewers cites Shavitz as being fairly harmless.

After all this grief, turns out the New York Times wasn’t even interested in the photos. But, as a consolation prize, the State Department certainly was … making Shavitz something of an accidental spy?