At a FOIA reform summit last fall, several open government advocates pointed to FOIA exemption 5 as a particular roadblock to transparency at the federal level. Under exemption 5, agencies can shield a broad swath of inter-agency documents, particularly under attorney-client privilege and “deliberative process,” a provision meant to protect officials’ frank brainstorming.

Following the summit, I requested agency training documents, manuals and guidance memos on exemption 5 from a handful of federal departments and agencies. While I’m still waiting for two laggards — looking at you, State Department and FBI – many agencies fulfilled the request promptly.

The Federal Election Commission, though, attempted to reject my FOIA request for its exemption 5 materials… by invoking exemption 5. 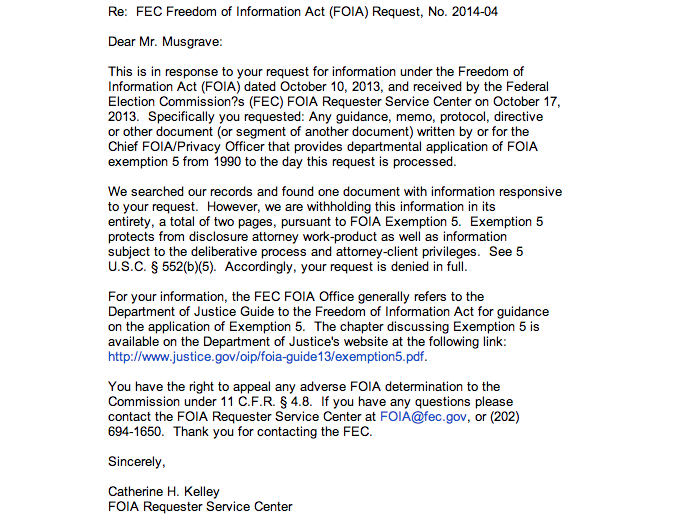 I appealed right away, pointing out that such a wholesale rejection only deepens the mystery surrounding exemption 5 and its breadth.

Nearly three months later, the FEC FOIA Liaison granted my appeal. It turns out that the documents the FEC originally withheld had already been posted on the agency’s own website. That is, the FEC withheld documents that were already published by the agency itself.

The released document is a brief from a team of FEC counsel on placing certain reports in the public record. The memo includes one key takeaway that every FOIA officer in the federal government, including the FEC officer who denied my initial request, ought to repeat each morning as a mantra: “not every document submitted by a government subordinate to a government superior is subject to the [exemption 5] privilege.”

That the FEC would attempt to shield this (already public) document on precisely the grounds that the document itself repudiates is its own flavor of meta-FOIA irony-zen.

Read the responsive documents embedded below, or on the request page:

How FOIA lets personalities shine, Fast and Furious the #opendata way, and a creative new “exemption” in Washington