I have written a number of times about ongoing difficulties with the New York Police Department’s FOIL Unit. From rejecting routine requests to claiming “inability to locate” documents even when provided with a form number, NYPD seems hellbent on obstructing access to its records.

But this latest rejection beats all, and flies in the face of Commissioner Bratton’s numerous public statements since assuming office that “there should be no secrets in the NYPD.”

Last week, NYPD’s freedom of information squad determined that its own handbook is exempt from disclosure under FOIL, New York’s public records statute. 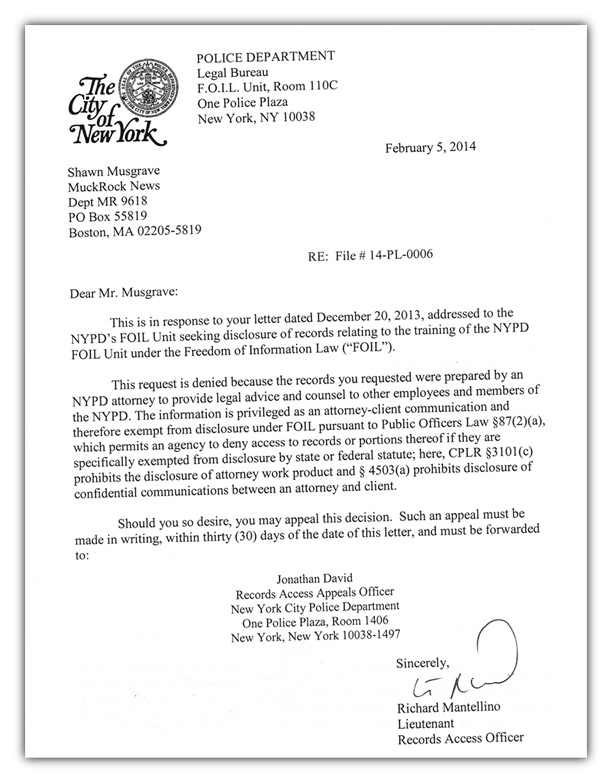 In an interesting interpretation of the attorney-client privilege, NYPD claims that it has no obligation to disclose its methods of processing requests for public documents. As I explain in my appeal letter, printed below, this line of reasoning plumbs concerning depths of absurdity.

I very much hope that a competent lawyer who is familiar with NYPD’s obligations under FOIL prepared the department’s records request manual and training materials. But just because something was prepared or reviewed by an attorney does not mean that an agency can withhold it. If this were true, the vast majority of policy documents prepared by any agency counsel would be immune from disclosure, as would most talking points memos, reports and communiques that endure lawyerly vetting. This is simply not how attorney-client privilege is meant to work.

Of all the divisions that make up NYPD, the Freedom of Information Law Unit ought to be the most transparent. Its policies and protocols are not “confidential communications.” Such secretive agencies as the NSA, FBI and the Department of Defense have released their FOIA handbooks and request processing guides with minimal redactions, and even posted them online proactively.

That this latest rejection undercuts Commissioner Bratton’s commitment to “do more to open up the organization, to make it more inclusive, to make our information more readily available to the public.” That it would come from the public records office speaks to the department’s seeming impressionthat NYPD is above public accountability entirely.

I am writing to appeal the rejection of 14-PL-0006, in which I requested “Any manual, training reference or other guide by which members of the NYPD FOIL unit are trained on the application of FOIL and processing of FOIL requests.”

By the attached rejection letter, Lt. Mantellino of the FOIL unit asserts that NYPD’s FOIL manual itself is exempt from release under the attorney-client work privilege, as are the department’s FOIL training materials. To put it lightly, Lt. Mantellino’s is not the appropriate application or interpretation of the attorney-client work privilege. Just because something was prepared by an NYPD attorney does not mean that it qualifies as an attorney work product and thus exempt from release under FOIL. I would expect that most documents, particularly policy and protocol documents as I have requested, were prepared or at least reviewed by an attorney. Just as having an investigator review a particular document does not make that document exempt as an investigative record, lawyerly involvement does not magically render these documents exempt by virtue of having crossed an attorney’s desk.

Rather, it is the content of the requested document that determines whether it is exempt. The attorney-client work privilege is meant to guard frank assessments of law as applicable to sensitive issues, particular incidents and litigation. This exemption does not apply to general documents that outline a department’s protocols and policies. Such secretive agencies as the NSA, FBI and the Department of Defense have released their FOIA handbooks and protocol guides with minimal redactions, and even posted them online in full. I would assume (and hope) that teams of attorneys from each agency compiled and scrupulously reviewed these guidebooks, but their records officers would never dream of invoking attorney-client privilege as NYPD has done here.

I would be remiss if I did not highlight the symbolic significance of this particular rejection, especially in the context of so many absurd rejections that have issued from the NYPD FOIL unit over the past year. Out of all NYPD’s offices, one might assert that the Freedom of Information team ought to be among the more transparent. This latest rejection belies this assumption even more than previous ones. In past rejections, the FOIL unit has claimed “inability” to locate documents even when I have painstakingly described them down to precise form number. Lt. Mantellino has also invoked exemptions for documents that New York courts ordered releasable in the past two or three years. In this case, NYPD’s Records Access Officer has rejected a request for documents about the very process of transparency itself within the department. Rejecting such requests in slapdash fashion does little to inspire confidence in NYPD’s competence or good faith in fulfilling its obligations under FOIL.

I would respectfully request an immediate reversal of this rejection and prompt delivery of the requested documents. Please let me know if I can clarify the request in any way.