You might not expect the Surgeon General as a political figure with enough notoriety to attract death threats. But C. Everett Koop, who died in February, carved out a prominent spot in the Reagan administration with his forceful positions on HIV/AIDS, tobacco and abortion.

The FBI file on Koop, released to MuckRock contributor Inkoo Kang, traces his catapult from pioneering surgeon to the country’s chief medical officer, a position that made him the target of two death threats.

Shortly after his inauguration in 1981, President Reagan named Koop to be Deputy Assistant Secretary for Health, then nominated him to the Surgeon General post a few months later. Before Koop could be confirmed, the FBI had to fast-track a rigorous background investigation. 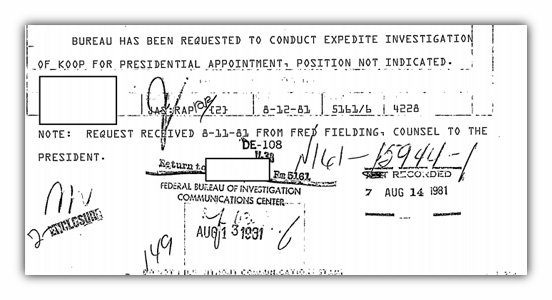 FBI agents across America urgently set to work. They needed credit histories, school transcripts and criminal records. They needed to set up interviews with dozens of Koop’s associates. If there was any tarnish, anything “derogatory,” to use the Bureau’s term, they needed to find it before Koop was submitted for confirmation.

In the regional bureaus, agents moved with haste. They tracked down Koop’s associates at home and on vacation – the San Antonio doctor staying at a motel out West, another man in a remote cabin outfitted with a “snake type log fence” but no phone.

The nationwide investigation revealed no criminal convictions, no credit defaults and a clean college transcript. Koop graduated with a bachelor’s in zoology from Dartmouth College before moving on to Cornell for medical school and the University of Pennsylvania for his residency. 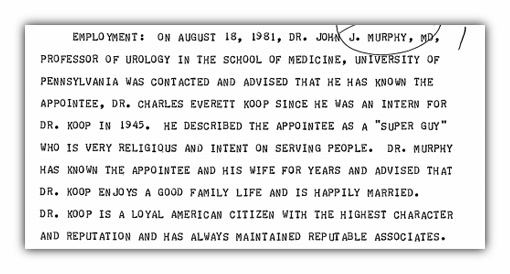 By all accounts, Koop, who was also known as “Chick,” had an unimpeachable character. His friends and colleagues in turns described him as a loyal American, a devout Christian and a surgeon of the highest order. Pat Williams, the general manager of the Philadelphia 76ers basketball team, described the doctor as “the Julius Erving of pediatric surgery.”

Koop emerged from the intense vetting unsullied. When he was reappointed in 1985 for Reagan’s second term, the FBI performed another round of checks. Again Koop was clear.

But Dr. Koop’s tenure was not without controversy. The rest of the FBI’s file reflects the debate that swirled around the Surgeon General’s stances. Koop opposed abortion on religious grounds but refused to declare the procedure as essentially unsafe for women, which put him at odds with the White House’s goals. He took up a personal campaign against tobacco, advocating for the mandatory cigarette labeling laws passed by Congress in 1984 as part of his vision of “smoke-free society in the United States by the year 2000.”

In the spring of 1989, less than a year after Koop mailed a pamphlet on HIV/AIDS transmission (PDF) to every household in the country, his FBI file indicates that he received two death threats. Followup investigations revealed that neither threat was especially serious, as both would-be attackers suffered from mental illnesses. One of the writers did, however, explicitly reference Koop’s smoking policy.

The files attest to the FBI’s vigilance in running down all assassination threats against public figures, legitimate or far-fetched alike. Agents tracked down both letter-writers and interviewed their associates to assure Koop’s safety.

One of the threats, which made reference to letter bombs, later surfaced as a handwriting match for a letter swept up in the UNABOM investigation. Processing documents make reference to the FBI’s “Anonymous Letter File.”

MuckRock has requested a list of the records contained in this file (always FOIA off your FOIAs).

The first file is embedded below, and the rest can be read on the request page.