Anyone registered to handle controlled substances — researchers, pharmacists and doctors, among others — is required by law to file a report with the Drug Enforcement Agency whenever drugs and chemicals under their charge are misplaced, lost in transit or stolen.

The DEA released its nationwide database of these theft/loss reports to MuckRock earlier this year. The spreadsheet subdivides controlled substance losses by state, type of loss and quantity of loss from January to August of 2013.

There seem to be some gaps in the tracking of drug losses by milligrams or units, and the spreadsheet includes a broad (and routinely invoked) “other” category when it comes to type of loss. Shortcomings aside (see below for a couple other caveats), the released database allows a fascinating glimpse into the locations and number of thefts or losses over an eight-month period.

MuckRock used this data to create a couple of basic visualizations to get a better sense for where most drug losses occurred, as well as how.

We also sliced out losses by mechanism: 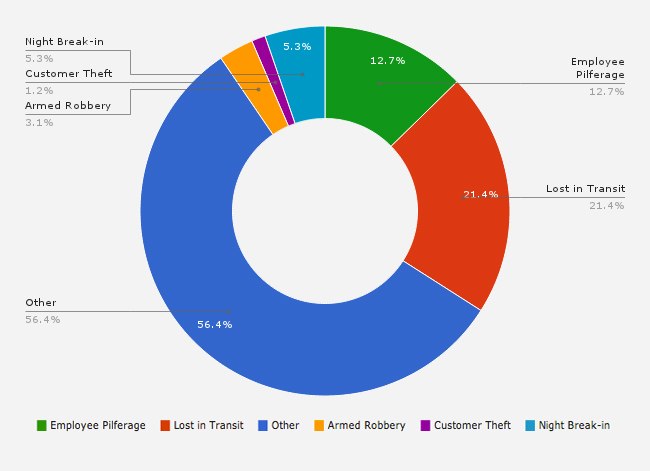 “Other” is the most frequent category by a wide margin, but “employee pilferage” and “lost in transit” also rank high.

The controlled substance loss data, available for download here, derives from the DEA’s Form 106. The DEA’s Office of Diversion Control notes that, “Federal regulations require that registrants notify the DEA Field Division Office in their area, in writing, of the theft or significant loss of any controlled substance within one business day of discovery of such loss or theft.”

It’s unclear, though, what exactly constitutes a “significant” loss that must be reported, and the agency noted in a set of rules from 2005 regarding the reporting requirements that there is “no single objective standard that can be applied to all registrants.”

Controlled substances range from Ambien to PCP to Codeine and are all listed here.