The two space fragments, known locally as “space balls” according to one State Department cable, were purportedly discovered by two farming brothers about two weeks apart.

They elicited excited correspondence between State Department and American embassy officials on the Ivory Coast, according to documents obtained through a public records request filed by Jack Carroll.

In a November 1973 letter to the American embassy in Abidjan, Ivory Coast, State Department officials requested the objects to be handed over for study. 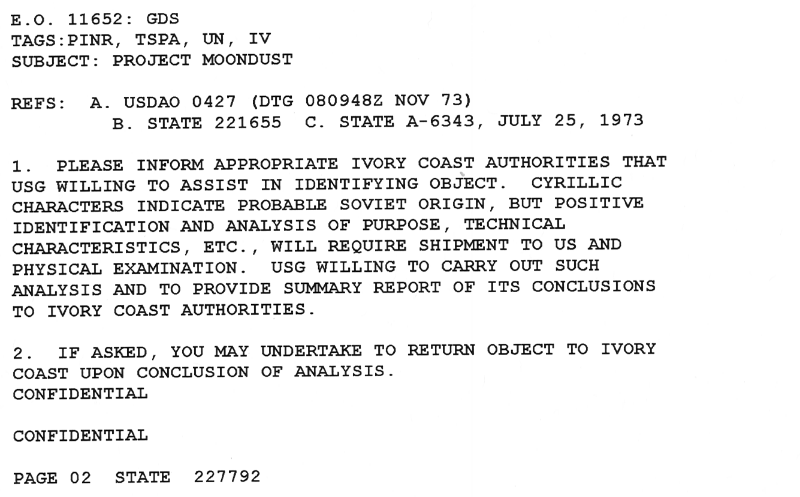 The Department of Defense and NASA were skeptical of the objects purported uneartly origins. Still, NASA said they would examine the objects, and provided estimated shipping costs to the State Department from New Zealand to the United States.

The objects were described as spheres with welded equators. They were seven inches in diameter, .1 inches thick and weighed about two pounds. The objects had numerous holes of varying size, and were found to be composed of aluminum, silicon, iron and copper.

These were not the only intergalactic objects of interest to the U.S. In December 1976, the State Department also requested information regarding possible space objects found in Windsor, Ontario. Other space objects were reported in Bolivia, India and Morocco.

A specialist later identified the objects in Ontario as probably old, melted down automobile transmission parts, according to correspondence between the State Department and the U.S. Embassy in Ottawa, Ontario.

As for the objects recovered by the Lovett brothers, the New Zealand Department of Scientific and Industrial Research concluded the objects were altered aluminum fishing floats. Additionally, the statistical likelihood of two separate space objects falling in such close quarters on the globe was deemed so small that the discovery was determined to be a hoax.

Read the full cables on the request page, or embedded below:

Image by Wesley Fryer via Wikimedia Commons and is licensed under CC BY-SA 2.0

Jack Carroll sent this request to the U.S. Department of State of the United States of America