Last month’s court decision in Virginia ruled that the state’s judiciary is exempt from the Virginia Freedom of Information Act. The state joins 18 others in blocking transparency to this branch of government. 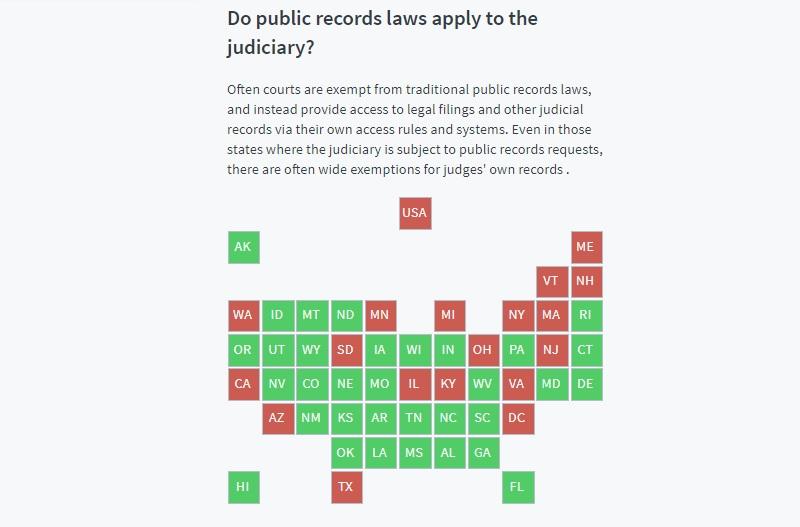 The decision was ruled on October 15th by retired Richmond Circuit Judge William Alexander II. In his ruling, Alexander affirms that FOIA does not apply to the judiciary, including the Office of the Executive Secretary. The new ruling marks the end of a three year lawsuit filed by William Turner over FOIA requested phone records and expenditures of individual judges, the Attorney General, and OES.

“There’s a disconnect as to what they think their obligation is to the public,” said the Executive Director for the Virginia Coalition for Open Government, Megan Rhyne. “They say yes, we should be providing this, but very selectively.”

Virginia FOIA never explicitly exempted the judiciary. Additionally, the OES was a grey area under public records law, but Rhyne says they still complied with requests. Now, the OES is exempt, and it remains unclear if they will continue to comply with Virginia FOIA.

“For years, the OES had been complying under FOIA and following it. They’d say, here is everything, but we are not subject to FOIA, but here you go anyway,” added Rhyne.

Earlier this year, the Virginia Senate was set to vote on a bill that would exempt the judiciary from the state’s FOIA. The bill, authored by Senator Richard Stuart (R-Stafford), was later withdrawn, right around the same time Turner’s lawsuit was circulating. Along with the bill, the Judiciary Court announced it would adopt a list of rules regarding access to judicial records.

Now, the Supreme Court of Virginia has proposed a new set of rules for the judiciary and is requesting comments on the rules.

“Last week, the Supreme Court of Virginia proposed new rules regarding access to their records, which are actually fairly liberal and contain a dispute resolution process, which is probably easier for non-attorneys to use as opposed to the existing Virginia FOIA regime,” said Senator Surovell via email.

Yet, advocates like Rhyne believe the rules could use some tightening up.

“One of the things that stood out to me was that in a couple of places in the rules they write things like, except when we decide, in regards to releasing records,” said Rhyne. “There are lots of vague terms like records that may include, which leaves a lot that may not be included.”

In addition to loose language, Rhyne says that rules on judiciary communications is of concern. Rule 11:3(b) exempts “written communications or discussions relating to procedural, administrative, or legal issues that have or may come before any judicial officer” among other items. The rest of the rules outline regulations on reconsiderations of denial of public records access and procedures to the OES.

Those looking to share their comments have until December 3rd, 2018 to submit them by writing or via email.

For now, the judiciary branch of Virginia remains exempt from FOIA with new rules on the way to either enhance or further limit transparency in the branch. The Virginia Supreme Court press release is embedded below.