MuckRock user and host of “The Vanished” podcast Marissa Jones has been trying to obtain information about a missing person named Chris Turner from the LVMPD since July 26, 2017, and requested help from the MuckRock staff after weeks without hearing from the LVMPD.

Jones says that Turner’s case was closed three days after the first part of a two episode series on Turner aired.

According to Turner’s mom, who was interviewed extensively by Jones, the police never made contact with Turner before closing his case. In a message sent to a podcast listener by the LVMPD and then forwarded to Marissa on July 20th, the police insisted that they had made contact with Turner, but the way the message was written seemed to express uncertainty about whether or not Turner was alive:

“Our case for Mr. Turner is closed. He was sighted/located, so one could say he’s alive.”

The message doesn’t say that he was sighted by anyone affiliated with the police, or related to Turner. Also, the phrase “one could say he’s alive” is a rather odd way to word it if they are in fact certain that Turner is alive. The message went on:

“We cannot release information to someone not involved in a report, and beyond that adults can lead their own lives, even though there are people who are concerned about them, but they tend to be out of touch with people who would like to hear from them.”

However, according to a “Law Enforcement Support Technician” at the LVMPD who only gave her name as Diana, one can obtain this information with the right paperwork - assuming you were able to get notarized authorization from the missing person. Seeing as you would need to find a missing person in order to obtain their permission, it is by definition categorically impossible to get a signature from a missing person.

Diana’s statement was contradicted by a November 2nd email Marissa received from Officer Larry Hadfield, who told her that “due to the fact that you are not identified as media, you must go through police records as any citizen would,” giving the impression that, contrary to information provided by other LVMPD employees, the information is available so long as one goes through certain (apparently ever-changing) channels.

According to Jone’s interview with Turner’s mother, his girlfriend reported Turner missing to the LVMPD on August 7th, 2016, but the family didn’t know until she told them on August 17th,. While it’s understandable that the police might withhold information about an ongoing investigation, it seems strange that they wouldn’t bother to contact any family members to make sure he wasn’t simply angry at his girlfriend and cooling off with a relative. 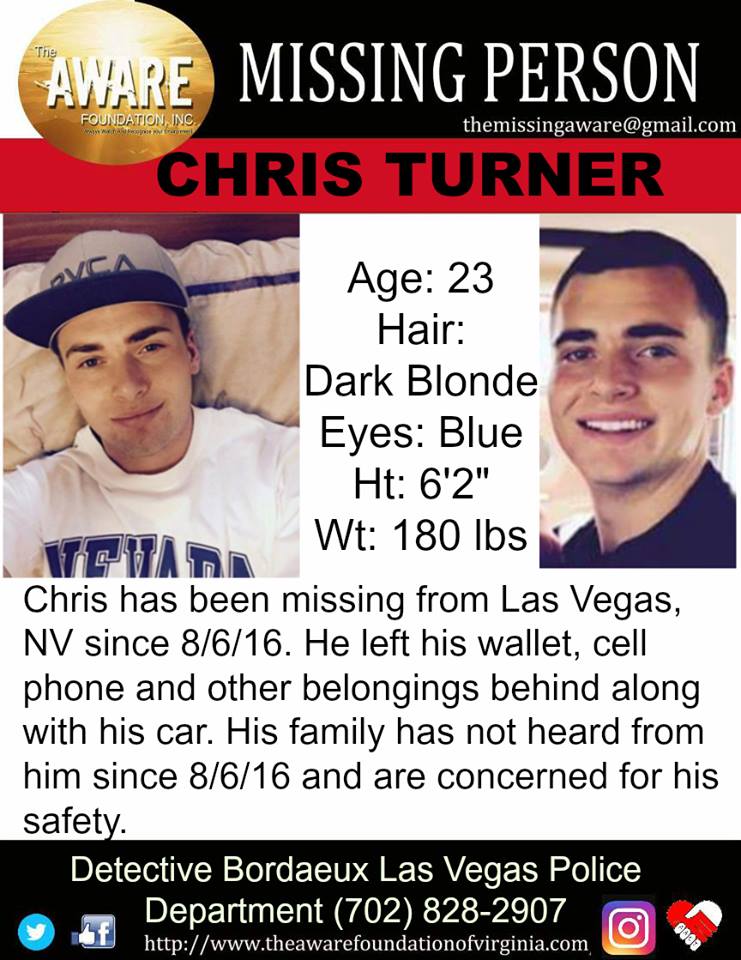 Turner’s mom says that the police didn’t start taking Turner’s disappearance seriously until six or seven months after the missing person report was first filed. According to her, the police initially dismissed it as a young man out partying and incommunicado, until she made a trip to Las Vegas and spoke to a Detective Bardot and a Sargent Burns. Up until that point, she’d had trouble getting updates on her son’s case when she called the department. She said she had to prove to police that Turner wasn’t the type of guy to go “off the map.”

Turner’s mom also said that in one of her conversations with Burns, he said he was investigating an angle that had something to do with the sex industry, but declined to elaborate further.

Obtaining Turner’s casefile could make clear if Turner’s mother’s assertion that the LVMPD didn’t begin investigating in earnest until he’d been missing for months is true, and whether or not Turner’s disappearance had anything to do with the local “sex industry” as Burns allegedly said.

Calling the LVMPD quickly proved to be an exercise in futility, as calls were passed from one department, to another, and back to the original department, then straight up ignored.

The first of many phone calls to the LVMPD ended up being little more than a game of switchboard roulette - we called the PIO, where Officer Larry Hadfield said that he was the officer assigned to the records request, but he couldn’t help us and didn’t understand why we kept calling him.

We explained that we were calling him because we’d submitted the request to his office, and seeing as he was the officer assigned to this exact request, we were quite certain he could help us. He assured us that he most definitely could not assist us, and transferred us to the records department.

They somehow managed to be even less helpful, and referred us back to the PIO again. The woman who answered the phone said the officer assigned to the request - with whom I’d spoken previously - was out of the office but would be back in a couple of hours.

Surprisingly, it managed to get worse.

Upon calling the records department this week, we were informed that only a police officer or someone with “special authorization” was allowed to obtain public records from the police department. I assured her that she was wrong. After going back and forth a couple of times with her insisting that public records were only public for the police, and me trying in vain to convince her that her interpretation of the law was not, in the strictest terms, accurate, she transferred me to her supervisor.

Her supervisor admitted that while they do accept public records requests (progress!), but never ever EVER by email. A quick search of past requests submitted to the LVMPD showed that’s clearly untrue, as can be plainly see in this response to MuckRock user Waqas Mirza:

More recent requests have gone unacknowledged, or have only been acknowledged thanks to requesters and staff following up relentlessly. It’s not clear why Las Vegas has pivoted toward opaqueness after having had a decent record of filling requests in a timely fashion, but whatever the reason, it’s become very difficult to get even an acknowledgment of a request, never mind the actual documents responsive to the request. The LVMPD’s commitment to obfuscation in Turner’s case raises the question of whether his case really was handled as incompetently as Jones’ podcast would lead one to believe, making them determined to keep it private. That seems much more likely than a sudden and inexplicable hostility to public records requests.

But we won’t know until we have Turner’s case file.