Oh, high school. American culture’s favorite nostalgic flashback is a time and place popularly considered “bad.” When in its throes, it can seem like another chokehold executed by yet another arm of greater state power, a foreshadowing of the world to come.

Oh, but, young grasshoppers, it doesn’t have to be.

While teens across the United States prepare to return to their cliques and classes, MuckRock would like to introduce inquisitive minds and aspiring rebels to the paper path toward challenging your school, town, and local government. Encourage increased clarity in your academics, transparency in your community, and civic participation in your country: file a public records request.

What is this sorcery of which you speak?

Americans live with the great privilege of being permitted by law to inspect the records of their government. This, to put it mildly, is huge. Most countries haven’t such a right in writing. Here, it’s been the case for fifty years, but the common usage of “The Internet” has rocketed general awareness of this fact and its usefulness.

Grown-ups, it turns out, are v. slow at, like, everything.

From the federal Freedom of Information Act to individual state right-to-information laws, there are legal mechanisms in place that say that those interested can look at the government’s stuff: the CIA’s, the FBI’s, your school’s.

Well, theoretically, all of them.

This means you too, not-yet-of-voting-age reader. (Unless you live in Louisiana. Sorry.) You too can question how your government is working, meaning you too can challenge how your school is working. And while there are some exemptions—particularly around other people’s privacy—there are plenty of materials available for the perusing.

Schools are guided by a lot of policies and provisions that you might not know about or that don’t get handed to you in your start-of-term packet. For the most part, these might not affect you, but when they do, you’ll want to get access to them, and you won’t necessarily want to finagle the delicacies of dealing with school administration.

Fortunately, with just a single letter, a legal obligation to fulfill your request is set into motion, one that the power structure of principal-pupil can’t circumvent.

Think your disciplinary case is being handled inappropriately? Consider asking for all policies related to your crime and punishment. Interested in graduating early or some other non-standard course? Or concerned that your school isn’t holding itself to state standards? Ask for the specific rules and regulations your school district follows. There are directives, memos, bits of paper sent from town to teachers, top-to-bottom, and if you know what you’re looking for, you can ask to have and see it.

Dollar bills remain the number one woe for public schools across the country. Think yours spent too much on holographic bookmarks or revisionist history books? Find out exactly by asking for the receipt.

Alternatively, consider doing a little snooping at a rival school. How did they get that shiny new soccer field? How are they implementing that new language initiative? Public schools generate public records, and if you see an idea somewhere else that you would like to import to your place, you can begin by doing your homework.

For those not carrying out your secondary school years in a sparkling example of modern architectural perfection—a few of you, right?—you might be curious about the infrastructure with which you are working. Here, you might want to check out what inspections have been conducted.

When was the last time lead levels were tested in your fountains, and what were they exactly?

Did anyone think it suspicious your last three chemistry teachers died of cancer; did anyone inspect for asbestos?

What kind of on-campus gas leaks do they know about?

Your school might not be testing as well as you’d hope, and if that’s so, drawing attention to it might get a little extra work done.

While we don’t suggest asking for your final exam, or all of your teacher’s emails, or your principal’s letters of recommendation, we do want you to know that it’s a possibility. You should also know, though, that for bulky requests, there can be a fee for searching for and duplicating records. Also note that public records laws don’t apply to many private schools and some charter schools.

So now that you know what you can do, how do you do it?

A request is just a letter asking for particular records. You’ll want to include a few particular things:

• The law under which you are making the request: “This is a request under the Massachusetts Public Records Act.”

• The records you’re requesting as specifically as possible: “All disciplinary policies regarding the use of prohibited websites”

• Your request for a fee waiver. The federal law limits the fees that can be imposed on students and non-commercial entities. State laws also might do this, so it’s good to include a sentence asking for a pass on fees and why. “Please consider waiving all associated fees, as this request is being made my a student for the purposes of research.” 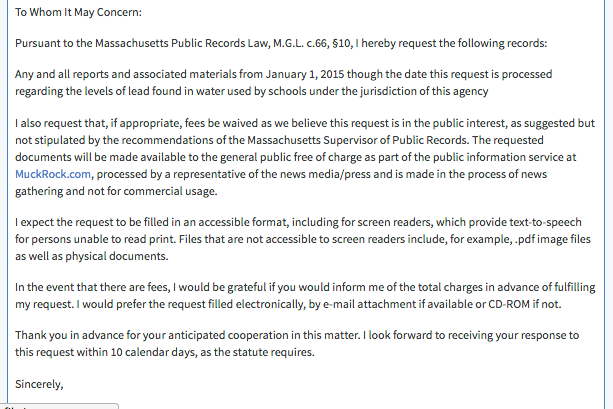 If you’re an educator or a student interested in learning more about public records and how they can be used in your classroom, shoot an email to beryl@muckrock.com or info@muckrock.com and ask about our FOIA 4 Kids lesson plan or any of your other records-related questions.

Remember, kids: knowledge is power, and we’d love to help.

Minutes from the October 25, 2005 School Board Meeting

Reconsideration of The Perks of Being a Wallflower (Wallingford, CT)

M. Alan Thomas II sent this request to the Wallingford Board of Education of Wallingford, CT