When the FBI first officially encountered Bess Myerson, she was a well-known television personality still wearing the glow of her historic Miss America crown. When they last investigated her, she was at the crux of a scandal that cost her her job and the tarnish-free sheen of a successful life in the public eye.

At the request of MuckRock user Robert Delaware, the FBI recently released its file on Ms. Myerson — the beauty queen-cum-New York Commissioner who passed away in January at the age of 90 — and in its limited way, it captures the checks and balances of a well-liked lady of the New York political sect.

Ms. Myerson first called the boys in black in 1958. Captured in a later biography compiled by the Feds, her life until then is glossed over. This includes her place as the first Jewish American victor in the vaunted beauty pageant, which coupled with her otherwise noted charm and talent to lead her to a string of television and commercial appearances, listed in the file.

Then, a curious letter from Oklahoma was sent to Ms. Myerson in New York. It was sent as the ball was preparing to drop in Times Square and arrived a week after the New Year, 1958. The envelope contained three checks: two made out to Bess — for $15,000 and $5,000 — and one left blank.

The accompanying letter is difficult to make out in the copy provided, but the gist was that Ms. Myerson was supposed to deposit these checks. What was supposed to follow was unclear.

As was predicted in Ms. Myerson’s initial questioning on the matter, the sender had been known to send similarly non-threatening letters before and no charges were made.

Ms. Myerson herself was the subject of the next investigation, though only in preparation for her appointment to Gerald Ford’s board on workplace issues. The file captures a string of high praises for her character and reservation-less recommendations …

Including one from Albert Marks, former executive director of the Miss America Pageant, who noted her “all around charm.” 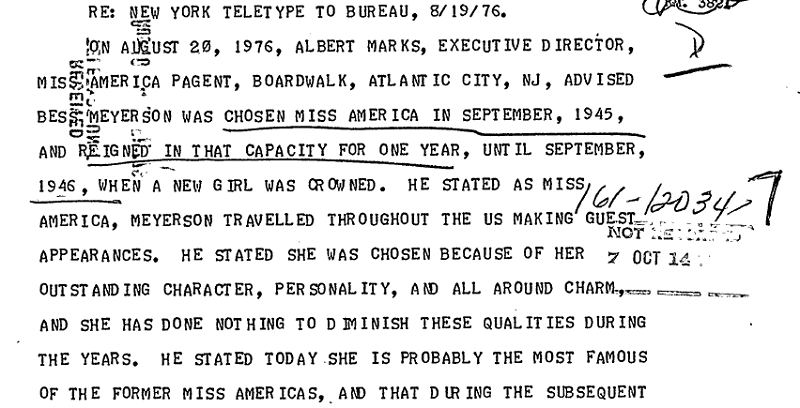 However, two less-than-glowing evaluations stand out - one is an anonymous source which claims that Bess and her family are all avowed communists …

and the other is some harsh words from her ex-husband Arnold Grant. 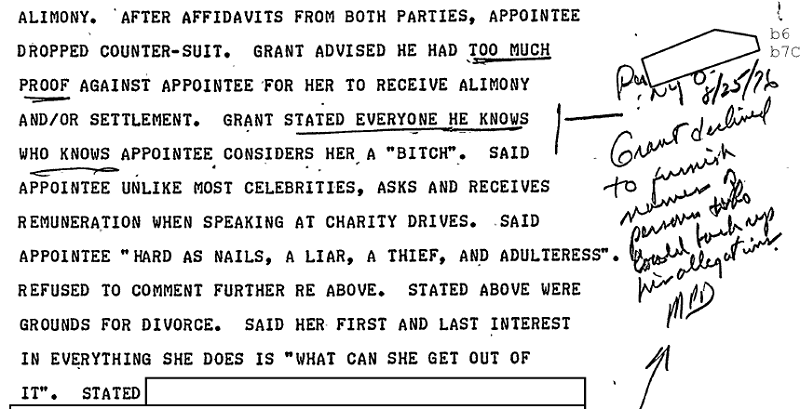 In addition, the White House-ordered investigatory record contains a receipt for the fingerprints of Bess Myerson Grant, obtained by New Scotland Yard in 1970 after a charge of “Theft from Shop.” 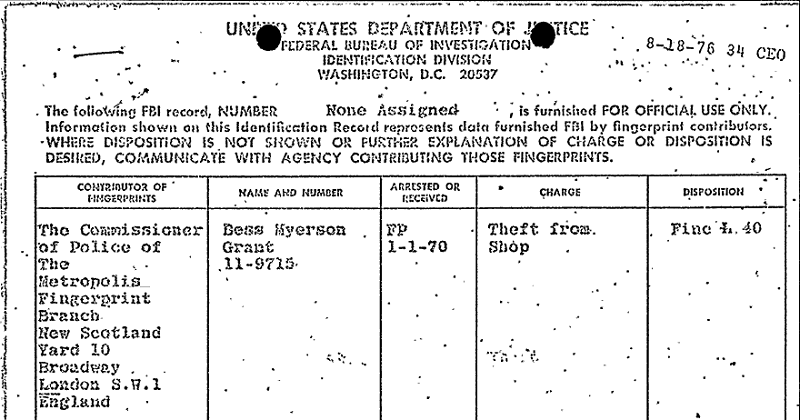 Ms. Myerson would later be arrested for shoplifting while on trial, alongside her married lover, for bribery in his divorce proceedings, the last milestone in the Myerson file before she retired quietly to the West Coast.

Once a close friend of New York City Mayor Ed Koch and a NYC official herself, Myerson was eventually acquitted in the bribery of Carl Capasso’s divorce judge, Hortense Gabel. According the file, the Assistant United States Attorney was intent on discovering her marks on a series a collection of pornographic materials sent to the New York Daily News in the early 80s.

The descriptions of the lab-cleared letters read like a set of smutty spam subject lines.

The Presidential investigation file has been embedded below, and the rest can be found on the request page.