There’s something swimming through Massachusetts’ waterways, and it might not be a trout.

According to recently-released EPA documents, the city of Worcester, Massachusetts, dumped more than 525 million gallons of mixed sewage and rainwater into Massachusetts waterways in 2013, leading the 24 cities and towns authorized to do so in the state. 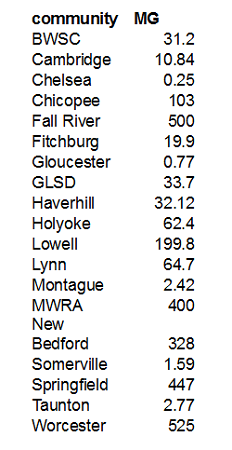 However, Fall River, population 88,857, leads the state in most sewage released into public waterways per capita, with 5,627 gallons of rain-and-sewage combination spilled into the Taunton River and Mt. Hope Bay per resident.

It’s worth noting here that while EPA numbers indicate Fall River released 500,000,000 gallons of sewage-and-rainwater in 2013, the city itself claims a much higher discharge rate on its website, an average annual total of 1.3 billion gallons, or 14,630 gallons of spillage per resident. The city is currently under court order to reduce sewage dumping.

According to the documents, the most polluted waterway is the Connecticut River, which meanders through Montague, Holyoke, Chicopee, and Springfield, occasionally picking up sewage along the way. In 2013 the amount of sewage-storm runoff sent directly to the Connecticut River came to 642,820,000 gallons, most of which came from Springfield.

So why is so much sewage is dumped into public waterways? In older municipalities, sewers were designed to remove both human waste and stormwater, so when it rains in Massachusetts, those sewers flood. Sewage pipes fill and the city releases the waste-water into the rivers, rather than have it come through the drains in your house, a practice called combined sewer overflow.

Interested in finding out if it happens in your state? Email us at info@muckrock.com and we’ll help you clone the request.