The Department of Justice makes billions of dollars each year through deals with state and local police forces that can act as loopholes in more stringent state laws governing how much money police get to keep when they take a person’s property without pressing charges.

The practice of seizing a person’s money or property without accusing them of a crime is known as civil forfeiture. Its official purpose is to deprive drug dealers of their profits, be it in cash, cars, or houses.

State civil forfeiture laws vary in generosity. Nevada, for instance, allows law enforcement agencies to keep every seized dollar they can spend by the end of the fiscal year. Police in Missouri, however, do not keep any proceeds from a seizure; the profits are all deposited in a state education fund.

But the DOJ’s Equitable Sharing program allows some local agencies a way around restrictive state laws.

Unless their state specifically prohibits it, agencies enrolled in the equitable sharing program can petition a DOJ agency to “adopt” their seizure.

In an adoptive seizure, if the local agency has seized the property without any help from the feds, they get to keep 80 percent of the profits while the DOJ takes the rest.

Proceeds from joint seizures, in which DOJ agencies cooperate with their local counterparts in the investigation, are split based on how much effort each agency contributed.

In July, MuckRock requested copies of the 2009 to 2013 Equitable Sharing reports for the police departments of the 20 most populous cities in the country. So far, 15 cities have released their reports.

Philadelphia and Detroit said they do not maintain copies of the documents. Dallas, Charlotte, and Memphis are still processing the request.

The report, called an “Equitable Sharing Agreement and Certification,” details an agency’s cut from adopted and joint seizures with the DOJ and the Treasury, which operates a similar program. 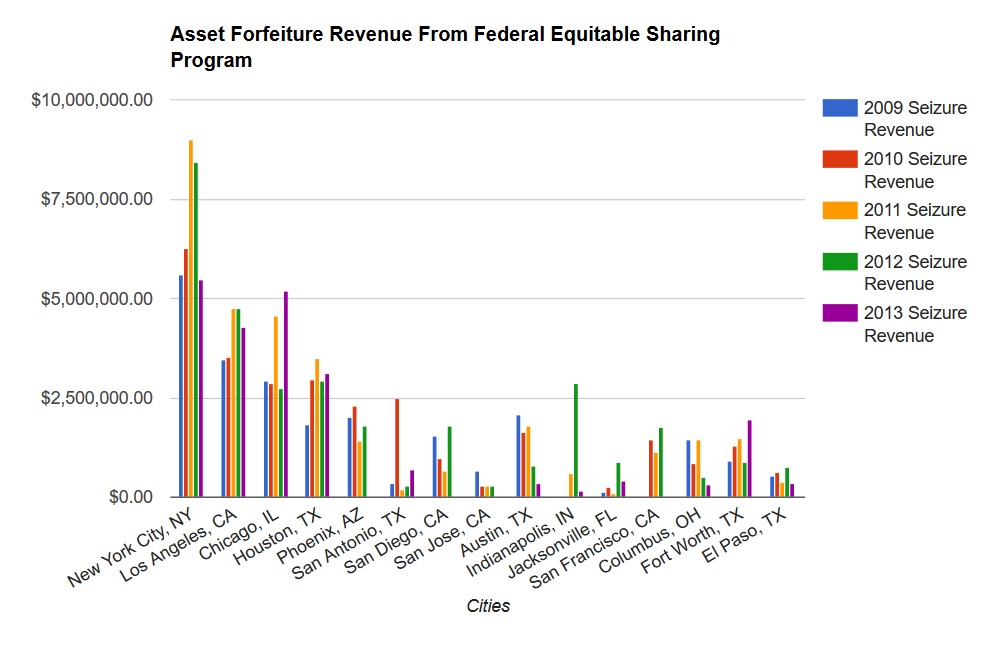 Agencies are also required to document what they spend the money on, albeit in broad categories.

Under many state laws, a portion of forfeiture proceeds must go towards community drug and addiction programs or into school funds. That is not the case under the Equitable Sharing program, and very few departments chose to divert their money for those purposes.

Only four of the 15 police departments gave any money to community programs, and the Indianapolis Police Department was the only one to give more than 3 percent of its total forfeiture revenue.

The NYPD, which spent nearly $42 million in Equitable Sharing funds during the five years covered in the reports, gave none of it to community programs. 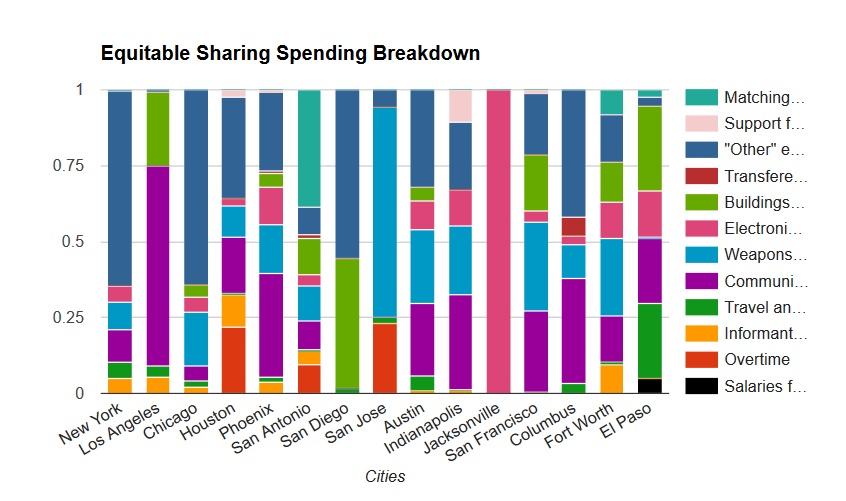 The DOJ requires that all equitable sharing money be spent for law enforcement purposes or to support community drug programs. That includes expenses in the “Other” category.

Several police departments, including New York, did not further break down “Other” expenses. And one in particular stretched the definition of “law enforcement purposes.”

Take a look through the equitable sharing docs yourself here, and as always, if you find anything, let us know at info@muckrock.com. 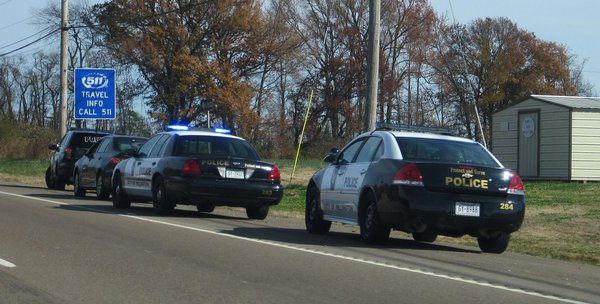 Despite reform efforts, state and local police are still teaming up with federal law enforcement to seize millions

In Texas, civil forfeiture laws are lax and seizures rake in millions