The midwestern metropolis of Columbus, Ohio is one of the fastest growing in the United States. Like leaders in much of urban America, officials in Columbus are looking for ways to handle the pressures that come with growth and demographic change. When Columbus applied in 2015 for the U.S. Department of Transportation’s Smart City Challenge, the only iteration of the contest so far, its vision for what it might do with the $40 million grant highlighted four main pain points:

After winning the competition by besting 77 other municipalities facing similar challenges, Columbus could become a leader in the smart city movement, a growing effort to use high tech solutions - the Internet of Things, sensors, real time data collection, and analysis - to solve urban problems. Part of Columbus’s task will be to serve as a model for other areas wanting to attain the promised benefits of advanced data analysis, artificial intelligence, and algorithms by bringing them more directly into contact with every city function. 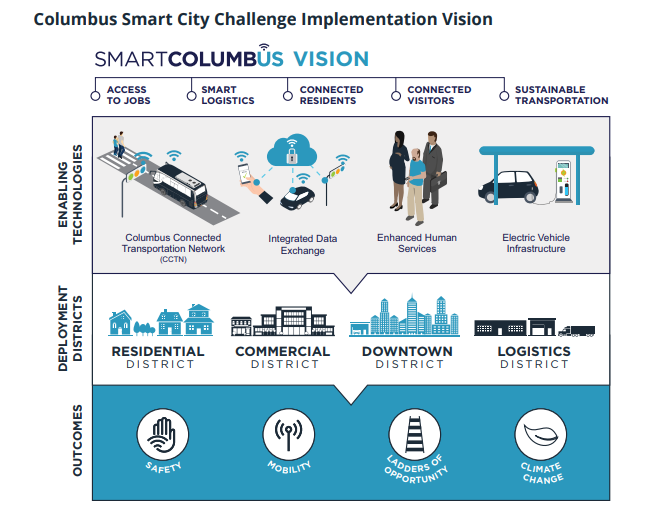 The Smart City movement, while conceived of several years ago, is actually just getting underway, and participation is still very much an experiment. The term “smart city” has been in use since the early 1990s, but in the last decade - particularly since the financial crisis of 2008 led governments and businesses to seek greater efficiency at a reduced cost - the idea has begun to gain traction. Internationally, China, India, and Singapore, in particular, have been pushing to upgrade their cities’ tech infrastructures.

However, the long-term impact on government efficiency and economic growth remains murky, and there are unanswered questions about privacy and excessive intrusion and data collection about individuals. But that hasn’t stopped cities - and tech companies who could benefit from widespread use of their products - from experimenting with the smart city concept. The “smart city” is operating under multiple definitions, but in particular, it’s a buzzword that captures the integration of technology and near-real time responsiveness. The smart designation refers not just to the use of technology but also to an improvement of the processes that require thought and human decision making within government.

Columbus, for example, is trying to develop ways to ease travel, looking to provide more options for the first and last mile of residents’ trips, employing self-driven vehicles along common routes, coordinating freight vehicles going through the city, and creating a system to identify available parking. For expectant mothers, the city wants to create a system to make health-related transport more convenient and reliable with the goal of lowering the risk of maternal death and infant mortality. The projects are all attempts to improve mobility, thus simplifying commutes and potentially saving lives. 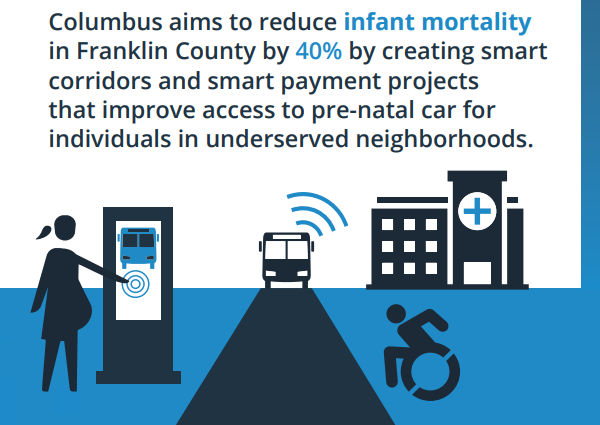 How smart systems get set up can be complicated given the number of parties - governments, product suppliers, public utilities, consumer advocates, and residents - who are trying to set goals, designs, needs, and protect privacy and civil liberties. “Need,” of course, is a pretty subjective term, and the “holistic” approach to systems such as facial recognition and other surveillance is a perpetually difficult, ongoing conversation.

Priorities will differ by city, but whether the focus is on easing traffic jams, making roads safer, or improving public safety, there will be new and continuous debates about the most equitable and fiscally responsible ways to proceed.

Products like smart city streetlights, which react to ambient lighting levels and the proximity of pedestrians, represent a pretty straightforward first step toward using smart technology for improving city life. They have gained popularity in urban markets for their ability to cut down on energy consumption and costs, in turn lowering the price of the initial buy-in. According to Navigant Research and other market analysts, it’s expected that the popularity of smart streetlights will grow from about 6.3 million worldwide in 2017 to 73 million by 2026.

“The smart city in 2008 is what AI is today,” Jaana Remes, a economist and partner with the think tank McKinsey Global Institute (MGI) said in an interview, pointing out that “smart cities” were the “next big thing” 10 years ago but until recently hadn’t generated enough experience for meaningful analysis. The smart city movement has begun to grow because improved technology is now in place in many cities and has become more affordable with the growth of wireless Internet access and investment in communication networks, which have sped progress in already urban, wi-fi-friendly areas. “[G]iven a city’s physical and human infrastructure, what can you gain if you add a layer of connective smartphones and sensors that create a flow of continuous, real time data into apps and electric tools?” Remes said.

Last year, MGI released a report examining 50 cities around the world that are implementing smart city strategies, finding that quality of life improved from 10 percent to 30 percent in systems such as water and energy use to healthcare. Transit and traffic also showed improvement.

“Mobility was clearly the area we’ve seen the most adoption,” Remes said. “Real time public transit information … car sharing, bike sharing, lights, information about public transit - all of those things were relatively broadly adopted. Time spent in commute is one of the largest pain points for [residents], especially in large cities.”

Addressing traffic issues also can help the local economy. Chicago - in a state, Illinois, which hopes to become the first “Smart State” in the U.S. - it is estimated that more than $7 billion drains from the economy because of traffic congestion and inefficiencies in the transit system.

However, while government officials, experts, and academics would agree that the main drive behind the Smart City movement is to improve quality of life for residents, so far it hasn’t proved to be a great economic development strategy; according to the MGI report, that area was one of the least affected by smart city adoption, which more effectively allows people to get to their jobs and live their lives, facilitating economic development but not guaranteeing it.

The Smart Cities Council, a privately funded industry coalition that is promoting smart city initiatives, has awarded multi-million dollar grants since 2017 to stimulate smart city programs (its 2019 iteration wraps up Friday, January 18th). The Council recently released a list of resources for municipalities that emphasize a three-step approach: envision the needs and outcomes, plan how to achieve them, and then implement that plan.

“Where most municipalities stumble is the first step, Envision,” said Council Chairman Jesse Berst. “They’re skipping it or they’re not involving enough stakeholders … and they get part way down the road and they left out a neighborhood or they left out a vulnerable population.”

“A lot of cities are failing to get through that Envision phase first and that’s where you get the holistic look at your city,” Berst said. “That’s where you’ve got your monthly team meeting and the police department says, ‘We want to do video cameras too,’ [because you also] need video cameras for your intersections…we need a network to carry the signals back, and we need storage for all that video, and we need analytics and facial recognition - and that’s where departments discover synergies and opportunities to share infrastructure and to share costs and to share data. And that’s the goal, right, when you can do those three things and you’re not reinventing wheels and putting up parallel structures.”

Funding for smart city initiatives is far from secure. In the most recent “Smart City Survey” from the U.S. Conference of Mayor, the number one reported challenge facing municipalities was “ensuring the city will have the financial resources to sustain a project over time.” Market analysts, however, estimate that the global market for smart city initiatives, nonetheless, will be a multi-trillion dollar industry in five years.

The potential financial incentives driving the movement and the ubiquitous involvement of private sector investment are hard to ignore. Though smart city upgrades may not generate many new jobs for residents themselves, the transition offers plenty of market opportunity for the companies that can secure their positions as suppliers. IBM has awarded dozens of smart city grants in the last 10 years. The Smart Cities Council was born from dinners with industry executives and relies on its partners to help fund their initiatives. Even the Department of Transportation grant was supplemented by private investment from Vulcan, Inc., an organization created by the late Microsoft founder Paul Allen; one perk for the winner was the potential it would bring for further private investment, and Columbus is headed for a total $1 billion goal for its smart city efforts.

No discussion of smart city changes can avoid talk of the private-public partnership, which can both provide financing options but risking compromising individual freedoms for the sake of corporate sponsorship. Many applicants to the Smart Cities Council award said they would supplement their training with PPP investment; however, there’s no guarantee that residents will be made proactively aware of the agreements being made in these situations. In Toronto, a waterfront project being conducted by Google-subsidiary Sidewalk Labs is being studied as one model of innovation prompting concerns from privacy advocates over the extent to which data behind smart city efforts will be protected or sold.

As cities, towns, and even whole states face increasing pressure to upgrade their services, from document management to emergency response to housing availability, the smart city mindset will become even more common.

“The US smart cities market is at an interesting stage, where there is a lot of activity and many planned projects across the country, focusing on a wide range of city challenges,” concluded the Mayor’s Conference report. “The progress of projects in the United States will be watched closely by cities around the world looking for ways to meet similar challenges.”

The DOT’s “Lessons Learned” report is embedded below.