On August 4th, 2018, the far-right “free speech” group Patriot Prayer organized a rally in Portland, Oregon alongside alt-right “fraternity” the Proud Boys, a Southern Poverty Law Center-designated hate group. A coalition of counter-protesters, including local unions, immigrant rights advocates, and Rose City Antifa were also in attendance. It was the third such rally in the city last summer, and led to multiple arrests and injuries.

MuckRock user Brian Waters obtained communication logs from the Portland Police Bureau from the day of the rally. The logs show police frequently overlooking armed and violent demonstrators with Patriot Prayer or the Proud Boys, while explicitly targeting counter-protesters with anti-riot measures like flash grenades and pepper spray, injuring many.

The PPB has been under scrutiny for its handling of white supremacist and right-wing rallies in the city, with accusations of excessive force on left-wing protesters and overt friendliness toward right-wing ones, including those with known histories of violence.

Patriot Prayer leader Joey Gibson reportedly switched the location of the rally from a federal plaza near the district court to a public park near Naito Parkway, so that his group could carry concealed weapons.

Days before the rally, the PPB issued a statement saying attendees carrying firearms must have an Oregon Concealed Handgun License and must keep their weapons concealed at all times. But the logs show that PPB repeatedly noted demonstrators with Patriot Prayer and the Proud Boys carrying visible firearms without apprehending them, putting other attendees - especially counter-protesters - at risk. 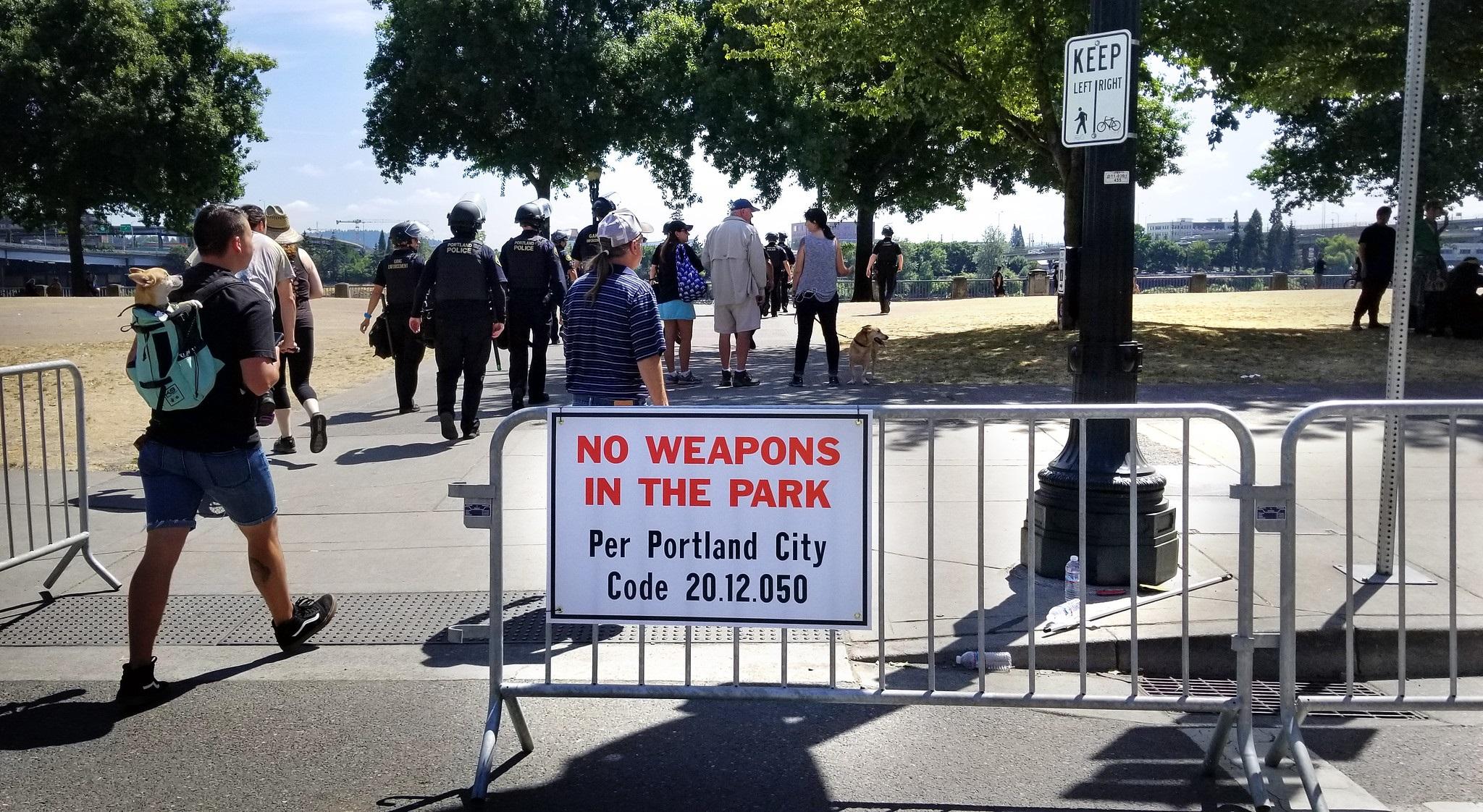 A group of white men, presumably associated with the Patriot Prayer and Proud Boy coalition, was noted to have taken a position on the roof of a parking garage, where PPB noted they had a rifle and binoculars. No follow-up action was apparently taken to confront or apprehend these men. (Editor’s Note: Waters request was specifically related to records related to that incident.)

PPB even allowed Gibson and the Patriot Prayer demonstrators to move their rally into a fenced-off area without being searched for firearms.

Meanwhile, a PPB officer called for backup to “take care of” counter-protesters who had armed themselves with shields made out of plastic garbage can lids.

PPB also noted the presence of a violent member of the Proud Boys who they identified as one of the men who “nearly beat Deondre Harris to death” during the 2016 Unite the Right Rally in Charlottesville, Virginia.

Four men have recently been charged and sentenced for their role in the brutal beating of Harris, and this man is presumably one of them. Still, despite his criminal charge and violent past, the PPB never confronted him: “Just FYI.”

PPB also spotted infamous Proud Boy “brawler” Tusitala “Tiny” Toese, who had apparently hopped out of a van and threatened a group of “antifa” protesters with a knife.

Toese was arrested in Portland just one month earlier for the June 8th assault of Tim Ledwith, but he was never prosecuted. Part of the reason for this, according to the Willamette Week, is that police refused to provide additional evidence requested by the state.

PPB, however, didn’t arrest Toese at the August rally despite his documented history of assaults in the city. In March, another warrant for Toese’s arrest was issued for the assault on Ledwick.

The rally in August was held only a year after the arrest of Jeremy Christian, a white supremacist who stabbed two men to death on a Portland light rail after they defended a black woman in a headscarf who Christian was harassing. A few months before the stabbings, Christian was filmed at an earlier Patriot Prayer rally giving the Nazi salute.

But instead of confronting alt-right ralliers with firearms, criminal charges, and violent histories, PPB chose to target counter protesters carrying “items that could be used as weapons,” like flag poles, reinforced banners, rocks and shields.

Police authorized the use of “impact munitions,” flashbang grenades, and highly potent pepper spray, referred to in the communication logs as “OC vapor” for the active ingredient, oleoresin capsicum.

Police even referred to some demonstrators, wielding shields, as “bad guys.” Though it’s unclear whether they were referring to rally attendees or counter-protesters, the comment comes between communications about “antifa” movements.

Many counter-protesters were injured by police actions at the rally, prompting the Portland Chief of Police to order an internal investigation. One counter-protester took twitter to document a head injury suffered by his friend after being hit with a PPB flash grenade.

My comrade was shot in the back of the head by @PortlandPolice today. He was hit with the very first flash bang the cops shot. Make no mistake this was an act of aggression and there will be hell to pay @tedwheeler #defendpdx #AllOutPDX pic.twitter.com/oSHqhpyzfC

After the rally, the Oregon branch of the ACLU accused PPB of “targeting demonstrators based on their political beliefs” and using “excessive force.”

“The Portland Police Bureau’s response to protest is completely unacceptable in a free society,” David Rogers, executive director of ACLU Oregon, said in a statement released after the rally.

“The repeated use of excessive force, and the targeting of demonstrators based on political beliefs are a danger to the First Amendment rights of all people. We call on the Portland Police Bureau, Mayor Wheeler, and Chief Outlaw to immediately end the use of weapons, munitions, and explosives against protesters.”

Onlookers and other rally attendees also noticed PPB officers’ focus on pushing back counter-protesters and protecting the right-wing demonstrators. One even called to complain directly to a PPB officer, as reflected in the communication log:

Other onlookers documented the police aggression themselves.

The August 2018 rally wasn’t the first time concerns have been raised about the PPB’s apparent friendliness with Patriot Prayer and hostility toward their “opposition.” In February, text messages obtained by Portland Mercury through an Oregon Public Records Law request, showed frequent communication, much of it collaborative, between PPB Lieutenant Jeff Niiya and Gibson.

These texts include a September 2017 message in which Niiya assures Gibson that: “I want you to know you can trust me. Don’t want to burn that.”

Read the full logs embedded below, or on the request page.

Brian Waters sent this request to the Portland Police Bureau of Portland, OR