Back in 2016, we wrote about how Shawn Musgrave’s FOIA request to the State Department about how long it takes to process FOIA requests was stuck in the department’s infamous bureaucratic limbo. We are happy to report that earlier this year, over four years later than the original estimated completion date …

Musgrave had finally been given the fruit of his labors: two whole pages, released in full.

I waited almost 4.5 years for a two-page #FOIA... about how long a FOIA request should take. @muckrock https://t.co/F2Dad5ndjJ pic.twitter.com/ALS1SeXGDo

(Granted a good six months of that was explaining to the State Department that MuckRock had changed addresses (twice, actually) since the initial request, requiring them to re-send the records.)

So how does the State Department’s FOIA office calculate Estimated Completion Dates? Well, according these records, they take an educated guess. 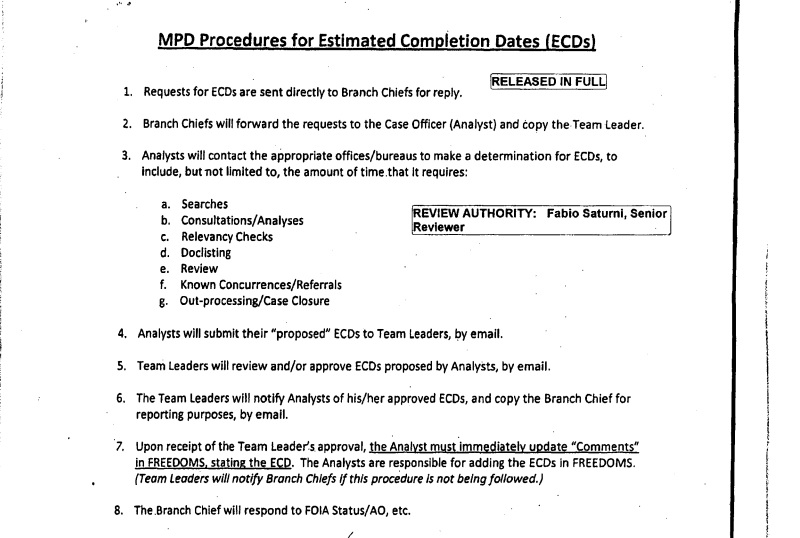 So … what happened? Why did it take four and a half years to produce two measly pages, with nary a national security secret in sight?

The State Department’s FOIA office has an infamous - and earned - reputation for sluggishness, with requests filed through MuckRock showing an average response time of 516 days - over 25 times the legally allowed timeframe of twenty days. Much of this could be blamed on how the department’s FOIA office is structured, which could be charitable described as “unique.” Up until recently, the office had full-time staff for assigning and sorting requests, and relied on a handful of part-time officers - mostly retired department officers - who handled the actual processing.

So, looking back at the release, you’ll see that these pages first had to go through a Review Authority, in this case Fabio Saturni, the former Senior Adviser in the State Department’s Bureau of Oceans and Environmental and Scientific Affairs. 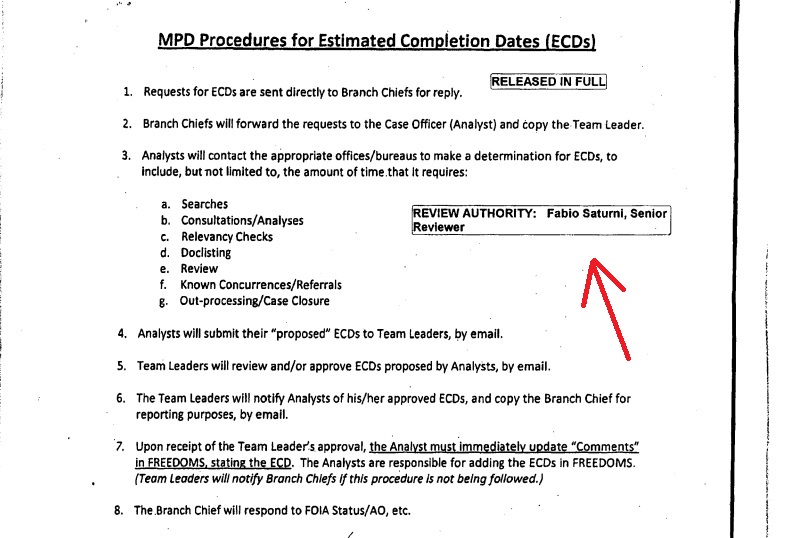 That four years of “processing”? That’s about ten minutes of somebody finding the pages in the FOIA manual, and then three years, three hundred and sixty three days, twenty three hours, and fifty minutes of waiting for those pages to make their way to the top of a pile on Saturni’s desk.

When former Secretary of State Rex Tillerson ordered the department to clear its FOIA backlog earlier this year in the so-called “FOIA surge,” there was wide criticism that the move was a form of political punishment - a notion pushed back on by FOIA veterans like the National Security Archive’s Nate Jones, who repeatedly pointed out that making the State Department fulfill its obligations under the law was, in reality, a good thing.

A nuanced issue... but bashing your State Department colleagues that do #FOIA as working in Siberia (as this anonymous quote giver has now done twice) highlights the problem. https://t.co/zOMUoFGDs4

Unfortunately, the “surge” was ended after Tillerson’s ouster, a move widely celebrated as an end to unjust persecution of State Department employees - again, except by people like Jones, who actually file FOIA requests with the department.

Would have been a better piece if she mentioned State's legal obligations under #foia, cited the stats showing State was among the worst FOIA backlogs in the USG, and assessed whether the surge was working or not before it was stopped. https://t.co/UjeILhpX1K

And so, with the department’s FOIA office left with more or less the same structure intact, we’re back to where we started - a department where even the most straightforward request can lead to making “Kafka wept” into a linked tag.

Read the full release embedded below or on the request page.

Shawn Musgrave sent this request to the U.S. Department of State of the United States of America