One of the files included in a recent JFK release details some of the Agency’s internal response to The CIA and the Cult of Intelligence by former Agency employee Victor Marchetti. The file includes some uncensored excerpts from the manuscript, including how the Agency used a liaison with an allied country to spy on them and how the Agency bribed foreign leaders to let them keep their surveillance system in place.

Although Sputnik posted an article about this, their article left out several significant finds like the ones mentioned above. Several pieces of context were also missing, such as that the censorship of the text doesn’t necessarily mean that the CIA is confirming it, as Mark Zaid noted in an exchange about the matter. This point is significant for those hoping to file FOIA and MDR requests, as the declassification of the accusation doesn’t constitute an official disclosure by the Agency, as well as to those who suspect the Agency might want to censor something that would make them look bad, whether or not it was true. Sputnik also overlooked a written statement from CIA which asserted that they only challenged classified material and didn’t address the factual errors in the book. 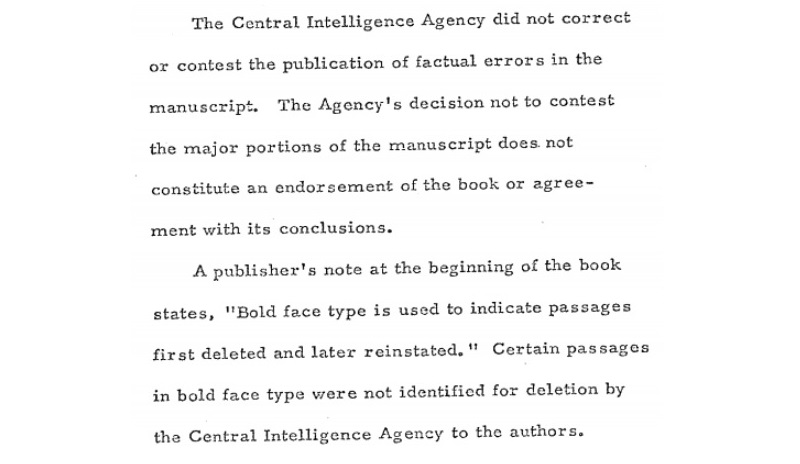 In their statement that they didn’t contest factual errors in the manuscript, the Agency asserted that “in all cases, the Agency’s role has been solely to identify classified information learned by the ex-employees during his employment. In no case has the Agency attempted to suggest editorial changes of the author’s opinions or conclusions. The Agency has not attempted to suggest changes in material that was not true.”

This assertion is … mostly true. 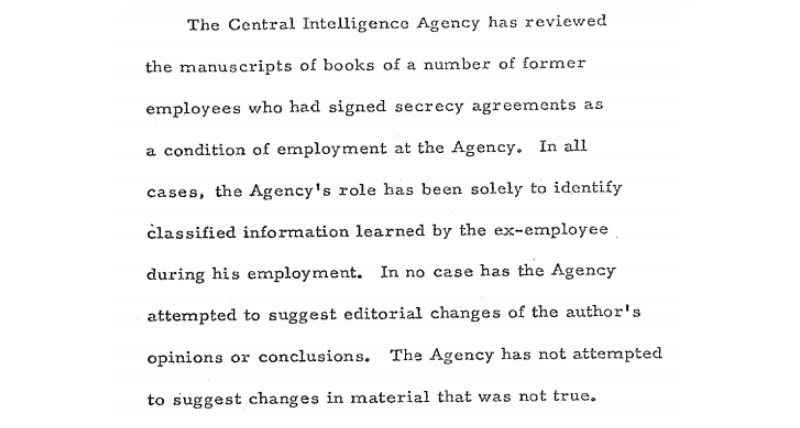 One excised passage highlighted the Agency’s duplicity in their liaison with the code breaking service of an unspecified South American country. According to Marchetti’s manuscript, they “took advantage of the liaison to intercept the secret communications of the host South American government.” The officer in charge of this “saw nothing wrong in practicing this sort of duplicity on an allied government which cooperated in good faith.” It’s easy to see why the Agency would have wanted that excised from the book. Regardless of its veracity, the mere accusation could be damaging. 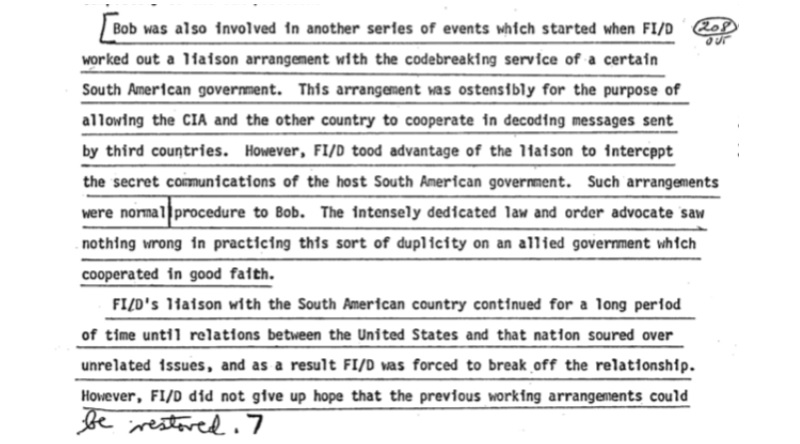 Although the liaison, and thus the opportunity, fell apart for a time, it was eventually restored as a result of a suggestion from “Bob X” in a closely held scheme. By helping the South American government get a channel on the international satellite communications network, Comsat, the Agency was able to create a situation where they once more were able to listen in on the country’s secret communications. 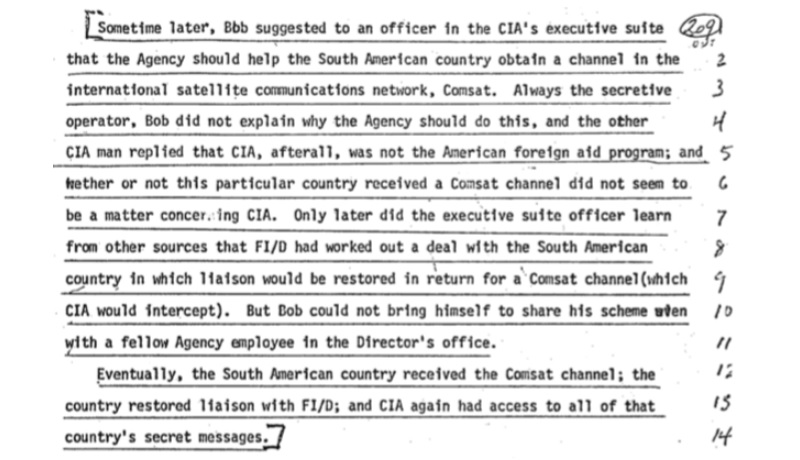 In another passage, Marchetti accused “Bob X” of secretly intercepting copies of communications of the other parts of the U.S. Government and providing them to the CIA Director, who was reminded that they “should be kept especially [confidential].”

Marchetti leaves the impression that this was far from unusual for “Bob X.” No mention of Bob or this affair appears in the published version of Marchetti’s book.

In another passage, which is referred to but censored in the published book, Marchetti alleges that the Agency gave the President of Cyprus, Archbishop Markios, several million dollars in bribes to allow them to continue operating an intelligence installation open on the island. According to Marchetti, the Agency had an interest in the facility because it housed a Foreign Broadcast Information Service listening post, while the Pentagon was also worried about “the possible loss of its large electronic surveillance facilities.” To prevent this from happening, CIA allegedly gave the Archbishop a $10 million bribe. Adjusting for inflation, the value of the bribe would be well over $70 million in 2018 currency. Marchetti’s text gives no indication that the money was paid to the government of Cyprus rather than directly to the Archbishop.

Another passage on surveillance facilities, also excised from the published book, states that close allies like England, Germany, Japan, and Australia “usually allowed the United States to set up electronic spying bases as part of the general framework of cooperation between allies.” 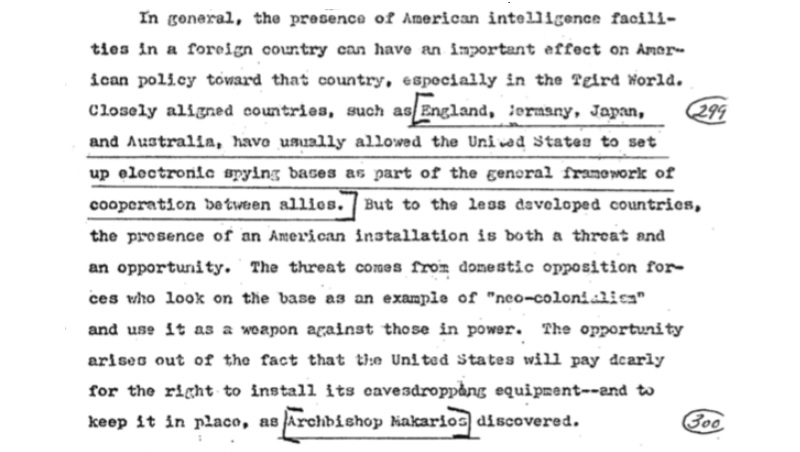 Another section, also excised from the 1974 book, alleged that all U.S. military bases in Africa were primarily there as intelligence facilities.

While only a portion of the censored passages in The CIA and the Cult of Intelligence, the declassified documents provide the first glimpse of parts of the manuscript which were classified, and the allegations that were hidden within them. A new FOIA request has been filed to learn more. In the meantime, you can read the declassified file below.

This article has been updated to remove speculative statements and conjecture regarding Sputnik’s reporting.