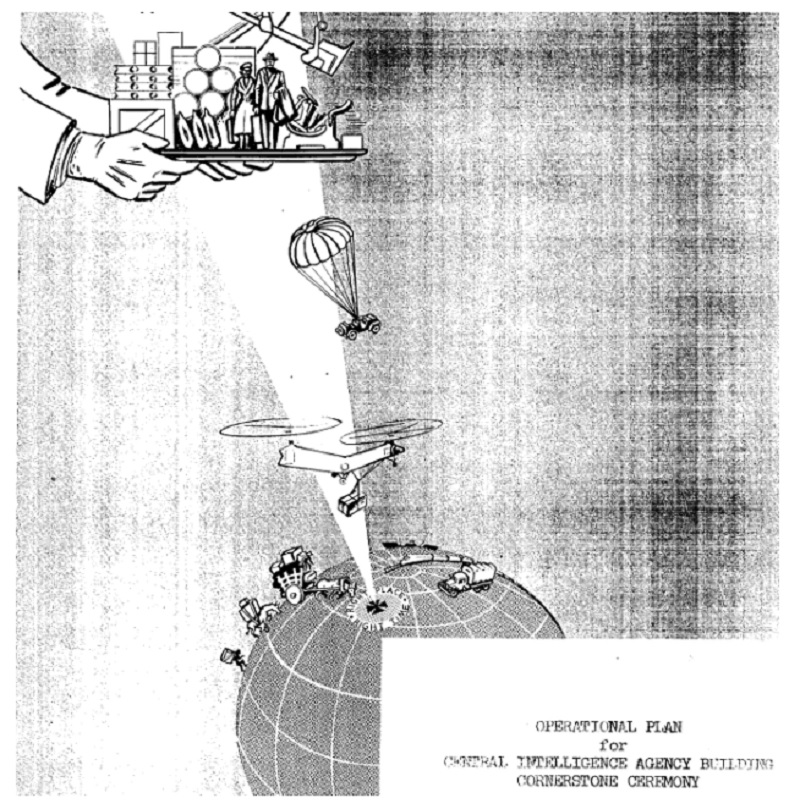 According to the CIA’s history of the original “Cornerstone Box,” it was placed in the walls of the building twice. The first time was a public ceremony, where President Dwight Eisenhower placed the box at the beginning of November 1959. 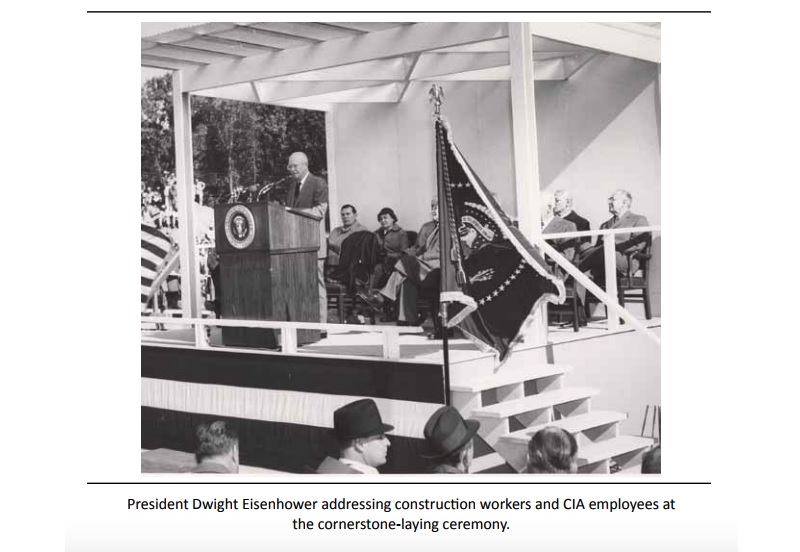 This, however, was merely a ceremony. Until the box could be permanently placed and considered secure in the walls, the Agency removed the box after the ceremony. Keeping it secure, they added several materials produced at the ceremony itself, including copies of newspapers covering the event, photographs of the event, and even a tape recording.

The tape recording was quickly brought up again in the CIA’s history of the Cornerstone Box. The document notes that the tape recording captured “the Director’s joking remark to the President that the contents of the box were ‘secret.’” The rest of the lengthy paragraph is spent explaining that this was a joke, and that while the Agency had considered including a number of classified documents, the Director had decided against doing so. 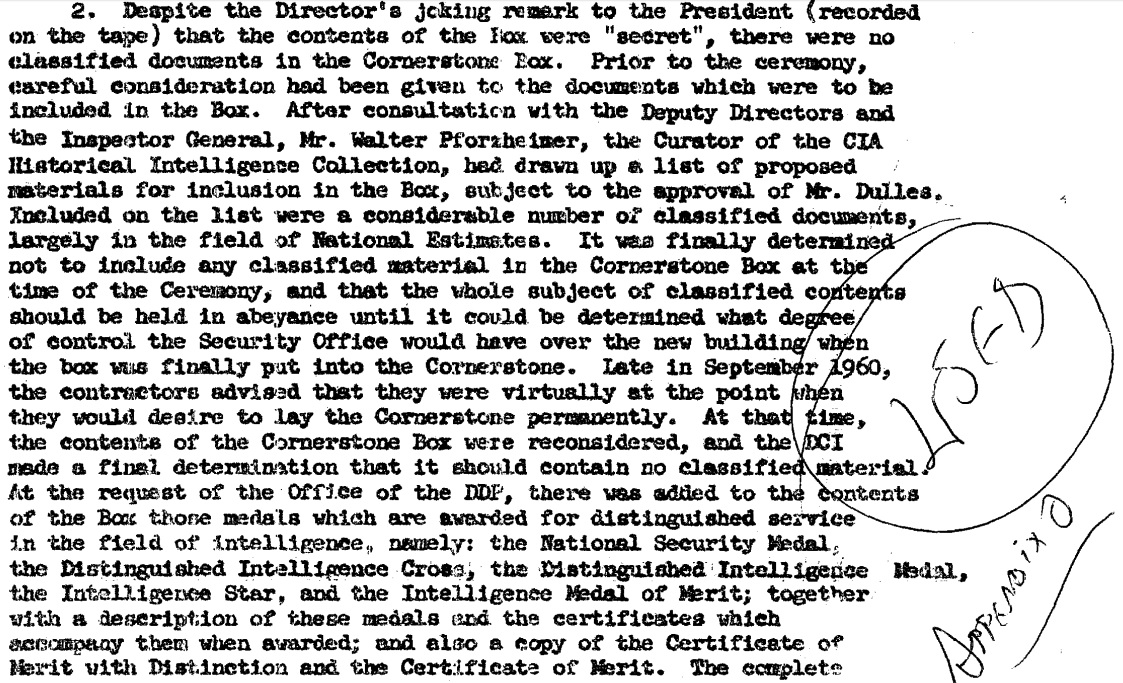 Another memo describes some of the debate, vetoing a number of documents which the Agency asserts are classified even to this day. 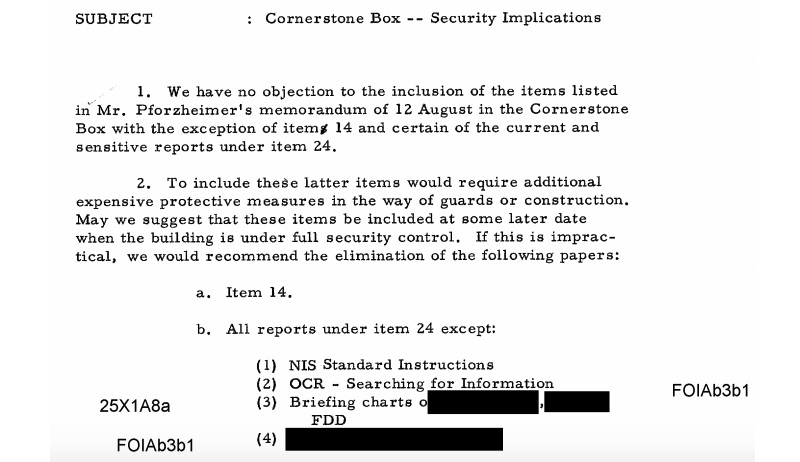 While the materials that were ultimately included were all unclassified, those redacting the Agency’s documents seem a little confused on this point. According to the Agency’s history of the Cornerstone Box, the box included a speech by Dulles titled “William J. Donovan and the National Security.” 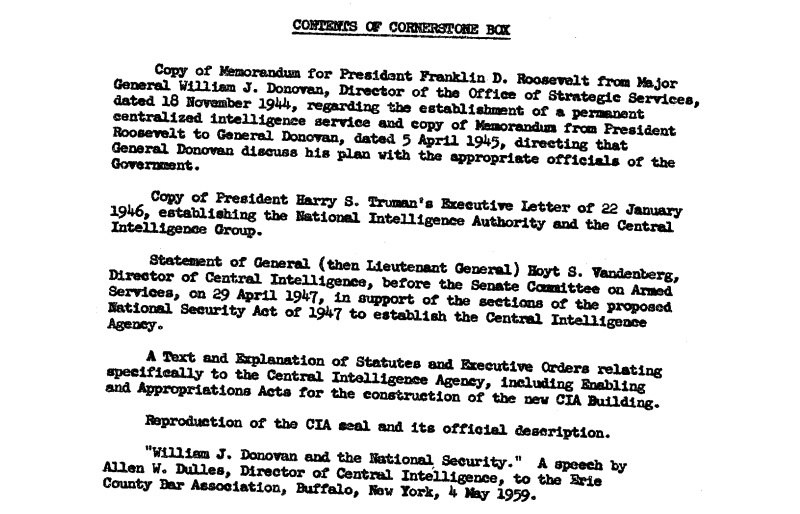 The speech was unclassified, and given to the Erie County Bar Association. Yet in at least one place, the Agency redacts the speech as a classified “source or method” that requires protection. A document listing suggested contents for the Cornerstone Box shows that the speech is number 20 on the list.

Another copy of the document claims that item 20 on the list was classified and exempt from declassification under 25X1 - protecting sources and methods. Perhaps most egregiously, the two documents were reviewed on the same day. 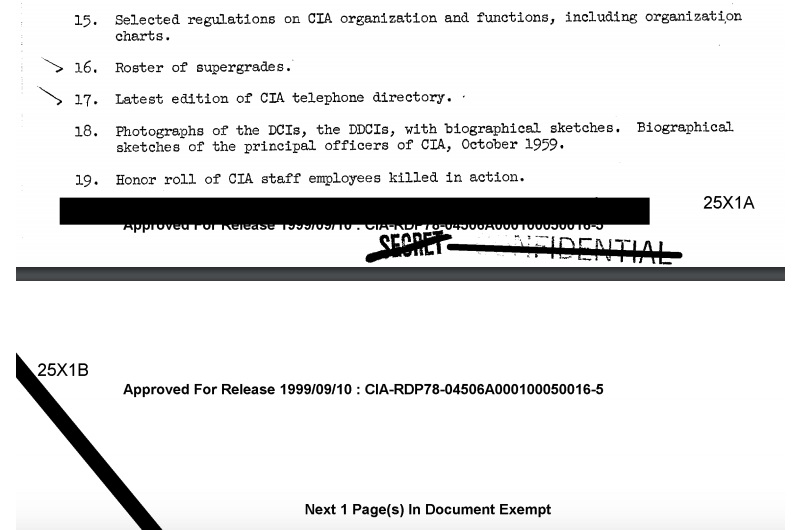 Regardless of the Agency’s inability to consistently and properly apply exemptions to declassification programs, it appears that the decision to not include any classified materials in the box was spur made in the spur of the moment, and as a purely practical matter. Dulles decided “on the spot that no classified material would go in the box,” seemingly to help expedite the matter. By this time, it had been about nine months since the Cornerstone Box laying ceremony with Eisenhower.

According to CIA’s history of the Cornerstone Box, it would take just under a year to finalize the placement of the box. The public ceremony with the President had taken place on November 3rd, 1959. The box reached its final resting place on November 2nd, 1960. This occasion was attended only by senior CIA leadership and their staff, “as well as representatives of the architects and contractors.” Many of them “threw lucky pennies into the nitch with the Box,” according to CIA’s Curator for the Historical Intelligence Collection, who had been in attendance. 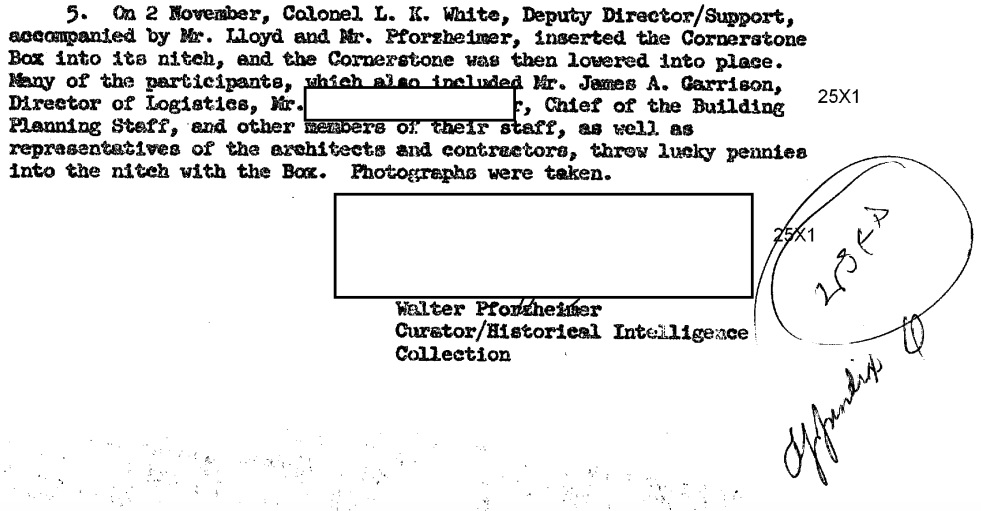 The box itself had been custom built to ensure it would protect its contents. 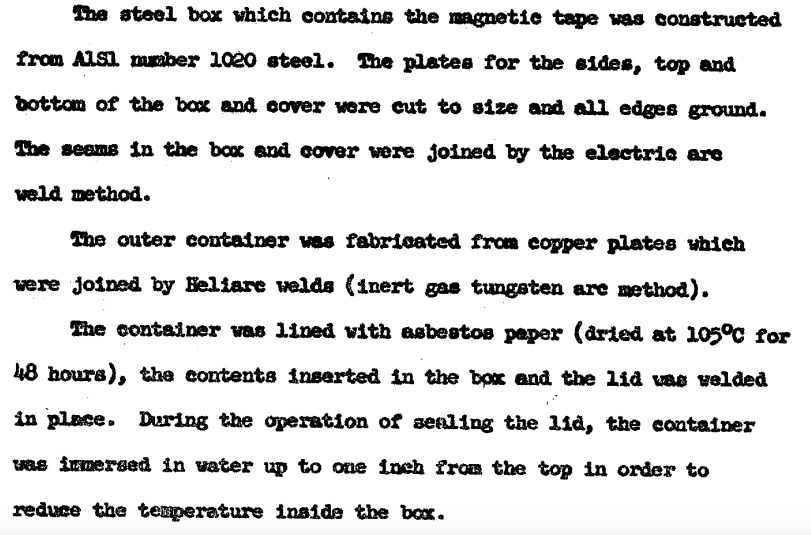 The ceremony itself seemed to provide the Agency with some excuse for internal drama, and even some shade being thrown in one of the CIA’s official histories. According to the Planning and Construction of CIA HQ (January 1946-July 1963), the ceremony’s invocation and benediction was given by Reverend Frederick Brown Harris, the Senate Chaplain. According to the history, “the length of the Invocation far exceeded any staff study CIA had ever prepared and threatened to keep us there until darkness fell.” The invocation was one and a half pages long in its double spaced format, noticeably shorter than the remarks given by Dulles.

What the invocation lacked in length, however, it made up for in rhetoric. In what mirrored the sentiment, if not the language, of the Book of Revelations, Harris called for the CIA building to “be a cathedral of truth, an arsenal of freedom, an armory for battalions marshaled against deceit and falsehood, a fortress of patience and persistence where patriotism pure and undefiled [was] as harmless as a dove but as wise as a serpent.”

The CIA’s enemy? “Principalities of darkness [that] seek … to enslave all mankind with fetters of the body and mind.” 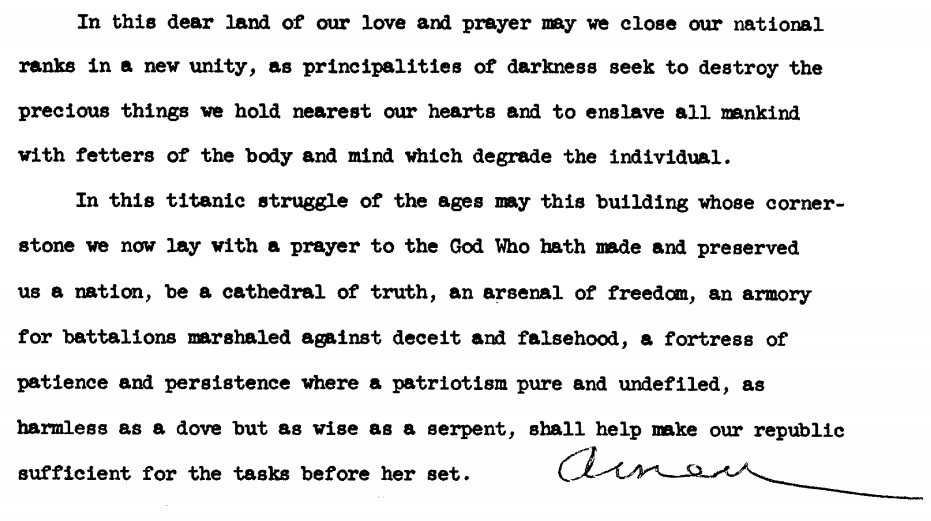 Twenty-five years later, when the Agency got a new Headquarters, they did it again. This time, the box was placed by former CIA Director, then-Vice President and future President George H.W. Bush. 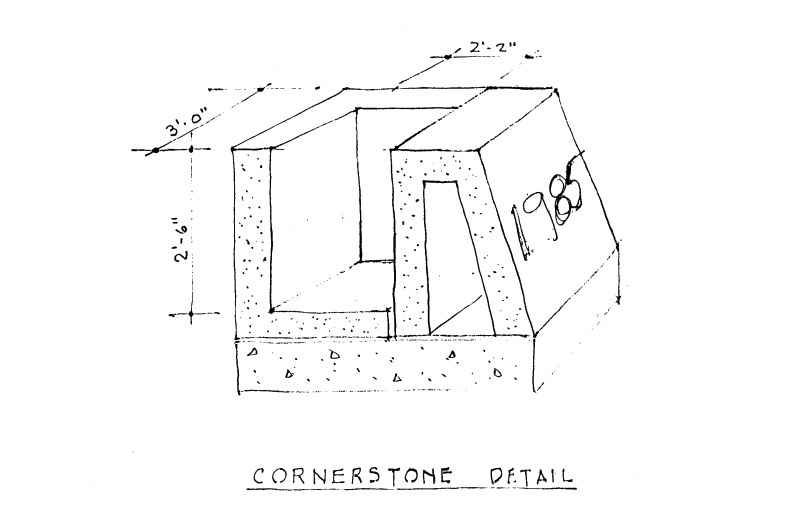 Of course, within just a few weeks the CIA would change their mind about some of those classifications. Apparently confirmation that the Agency uses “electronic intelligence gathering devices” wasn’t a “source or method” that required protection, after all.

The suggestions also include a few interesting revelations, like the fact that CIA apparently used to give out buttons that said “U Done Good” and had a to put a “no sleeping” sign in their library. Another suggestion involved including a list of the names associated with the stars on the Agency’s Memorial Wall.

The most alarming suggestion, from a security and counterintelligence standpoint, was the inclusion of a “list of the true names of all of the Agency’s employees.” The emphasis on “all” implies that this would include not only the nameless rank and file of the Agency, but their covert employees and those under non-official cover. This list would have been a prize to any foreign intelligence service, and placing it in a time capsule in the walls of CIA’s Headquarters would have been the premise of a rather pulpy spy thriller or heist story.

In the end, the box didn’t include such compromising information. The Agency’s listing of the contents of the box show basic speeches and documents, with a handful of redacted items. Interestingly, the list of items in the box include notes on where the suggestion was originally listed, with the suggestions including the identity of the person who suggested. Two separate people suggested the CIA Credo, which the CIA Director had recently been making a big push on. Both of the suggestions to include the CIA Credo are noted in the margins of the listing. 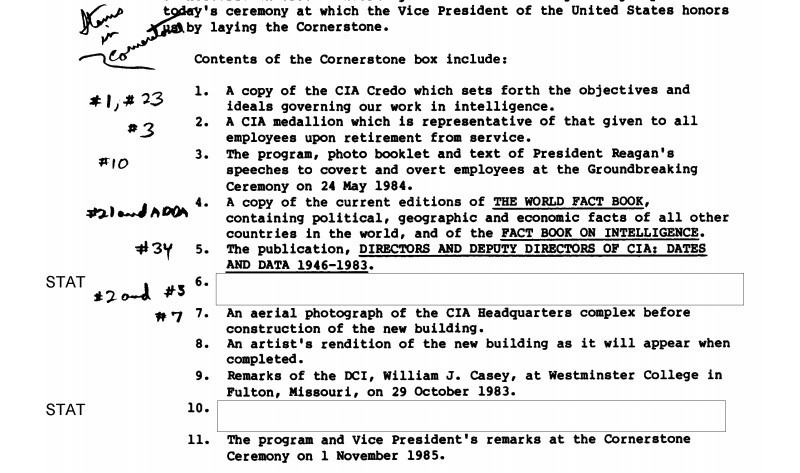 Another document reveals just what items had been redacted: one of CIA’s miniaturized cameras, a “crypto chip,” and the remarks of Deputy Director John McMahon at the memorial service for the Beirut Embassy victims. 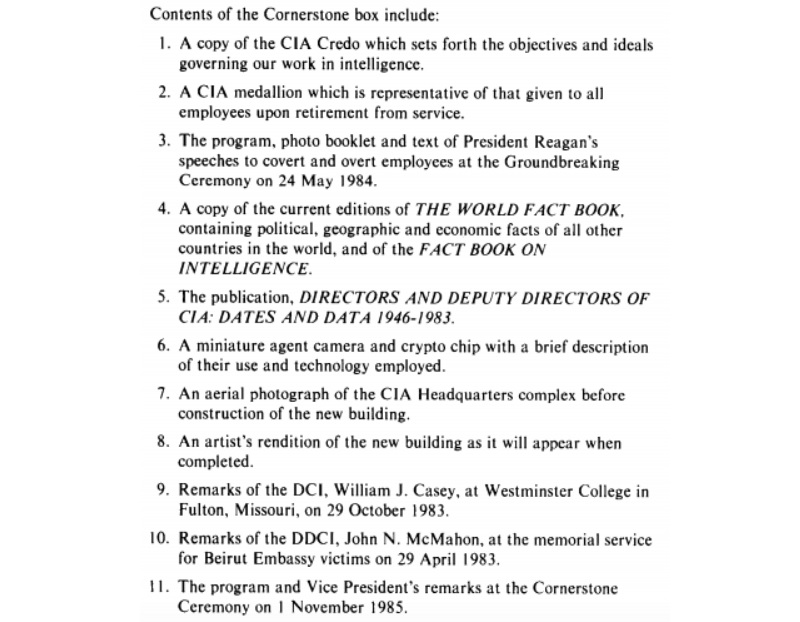 FOIA requests have been filed about both Cornerstone boxes to help us learn more about this interesting piece of historical trivia (and perhaps to help write the script for the next National Treasure). In the meantime, you can read Agency’s history of the Cornerstone Box below or browse through more documents on CREST.

Disclaimer: MuckRock has no plans to steal the CIA Cornerstone