A 1951 letter to the Central Intelligence Agency from a former spymaster warned of Russian infiltration in North America’s northern territories. A copy of the letter, which postdates the beginning of the joint CIA, Federal Bureau of Investigation, and Air Force stay behind program, was sent from the Assistant CIA Director directly to FBI Director J. Edgar Hoover, with a copy being sent to the leadership of G-2 (Army intelligence). As described by the CIA’s cover letter, “the Soviet threat to Alaska and Canada is discussed in very general terms.” Despite the letter’s “general terms,” its information and warning were considered important enough to send to Hoover in a package marked SECRET, and it remained classified until late 2018 - 67 years after it was written. 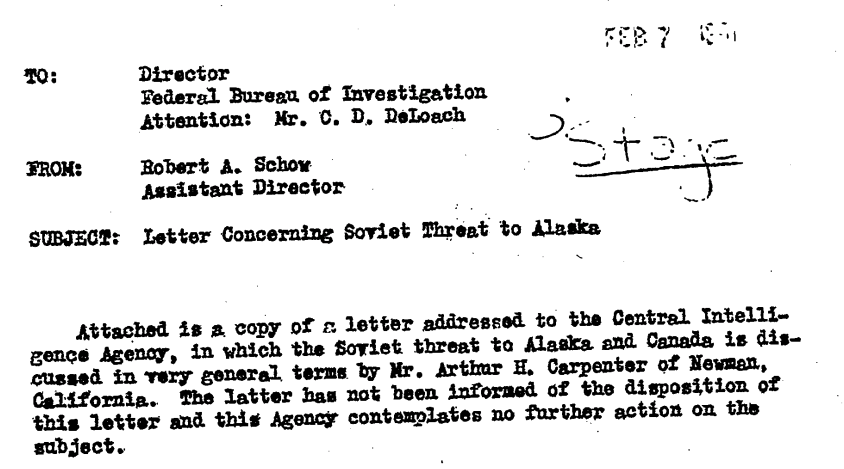 The letter, dated January 9, 1951, has no subject line and is addressed only to “Gentlemen.” It wastes little time, and speaks of “a hazard that might well develop in the defense of Alaska and North Canada in the event of Russian attack.”

The letter’s author, Arthur Carpenter, had been stationed at Whitehorse in Canada from 1943-1946 as part of the Army’s Northwest Service Command until it became the Sixth Service Command in mid-1945. While stationed there, Carpenter had worked as the command’s “director of security and intelligence.” Their work focused on protecting projects along the Alaska Highway, and included liaison with the North West Mounted Police.

Arthur wrote that, due to Russia being allies with the United States at the time, many locals with communist or socialist leanings weren’t shy about being critical of their government. Carpenter felt that while most would support Canada if Russia attacked, there was already “a good nucleus for a 5th column,” and that this would be especially true if they were infiltrated by “Russian Communists.” Unfortunately, Carpenter reported that this might already have been the case.

According to his letter, “there was some evidence, although unconfirmed, that Russian infiltration” might have taken place in 1945 and 1946. Carpenter didn’t indicate that the signs of infiltration ended then, implying that he merely was unable to speak about anything after his deployment there ended in 1946.

Carpenter’s letter recounted some of the evidence in a description of one of the investigations they had conducted. According to his letter, Carpenter and his people came across a group of Russians that supposedly ran a trucking route along the Alaska Highway. Significantly, to Carpenter, “their headquarters tied in with a Russian attorney” in Alberta. The attorney was reported to be “one of the leaders in the communist movement” in the area. The matter apparently wasn’t pursued, as they lacked orders to look into communists and, for reasons that aren’t clear, were explicitly instructed not to check the place.

In the course of liaising with the NMP, Carpenter “became well acquainted” with one of their members who had spent several years “as an under cover man investigating communist activities.” The unnamed member of the NMP reportedly believed that if Canada were to become “embroiled with Russia,” there were “very militant” communists who “would support Russia or a revolution with all their strength.” The majority of the militant communists could apparently be found in Alberta.

Carpenter felt that if there were a war with Russia, both Alaska and Canada would become involved and the North American infrastructure would be dependent on the Alaska Highway and a chain of airports that stretched two thousand miles. Both would be susceptible to sabotage and disruption by Russians that had infiltrated the area. Carpenter’s letter amounted to a warning that the question was “how much infiltration has already taken place” rather than whether or not it had.

The end of Carpenter’s letter outlined several additional vulnerabilities in the northern territories, including “how easily the thousands of deeply frozen lakes … could be converted into natural landing fields for large scale air attack.”

It’s unclear what the Agency did with this information, though it paralleled areas of concern for them and the FBI, with whom the letter was shared. The matter was undoubtedly of concern to Hoover, who likely investigated the matter further. A new FOIA request has been filed to learn more about the Bureau’s response. In the meantime, you can read the entire letter below, or visit the request page to see the correspondence with the Agency (which initially refused to admit the letter existed). You can also see the extensive FBI file on the Alaskan stay-behind program, which CIA asserts is connected to Carpenter’s letter, here.