The task of enforcing our country’s immigration laws has become a sprawling responsibility in the United States, and, as indicated by this presidency’s list of priorities, it’s poised to expand even further. Among those indications: insistence on a border wall, prohibitions on certain foreign would-be entrants, the recommitment to privatized prisons and detention center operators, and the latest call to halt the Deferred Action for Childhood Arrivals (DACA) program implemented under President Obama.

With an estimated 11.5 million people unauthorized to live in the country and another three-quarters of a million facing down the rescindment of residency privileges under DACA, the mechanisms by which non-citizens are detained and removed are facing a lot of strain: practically, financially, and socially. Given the already troubling criticisms of the system as it existed, scaling up seems like a rough order being teste now by an all-time high immigration court backlog.

Customs and Border Protection (CBP) - which, along with Immigration and Customs Enforcement (ICE) and U.S. Marshals Service (USMS), comprise the federal immigrant justice system and work with local law enforcement in their efforts - proactively posts on its website statistics about its apprehensions and uses of force. And since the transfer of power to President Trump, these statistics have begun to move in noteworthy ways.

For one, CBP apprehensions are down, the result, presumably, of a slower stream of people coming from South America than was seen three summers ago and President Trump’s demonstrated aversion to non-citizen residents. 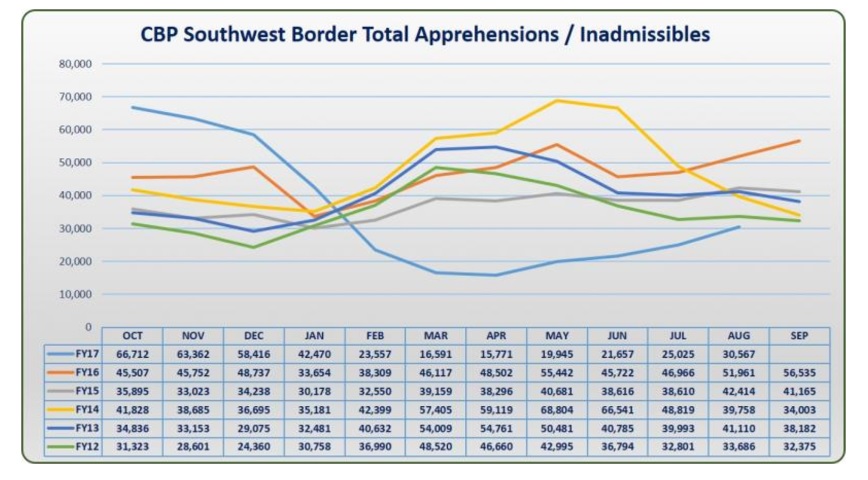 Meanwhile, ICE apprehensions have gone up.

Fewer people entering the country illegally combined with more arrests of those who have hasn’t translated into a smooth deportation effort, though. The number of actual criminal prosecutions and deportations has, in fact, dropped, as the rate of deportation hasn’t kept up with the rate of arrest.

Any system dealing with such emotionally-charged interactions as are those of immigration status can quickly become overtaxed, and the consequences of those stresses can be unforgivably fatal when human beings in custody are concerned.

CBP, for example, recently experienced a notable jump in uses of force alongside an increase in apprehensions, even accounting for changes in reporting requirements.

Despite the drop in CBP arrests, the agency still leads all federal agencies in number of criminal convictions, garnering 47.2% of investigations leading to conviction, according to a recent report from Transactional Records Access Clearinghouse (TRAC).

Recent reports about the standards of detention within immigrant detention centers makes the growing backlog of detained individuals that much more concerning. With a lack of proper detention standards for CBP arrests and a failure within existing facilities to implement the standards in place, the concern that atrocities might grow up alongside growing populations is a credible one.

MuckRock is continuing to follow up on accountability measures currently in place where immigration violators are held. Have tips or suggestions? Let us know at info@muckrock.com or via Twitter.