Files posted to the Federal Bureau of Investigation’s FOIA reading room show that for over 20 years, FBI Director J. Edgar Hoover had to politely clarify that the Bureau was in fact, not in possession of Nikola Tesla’s plans for a death ray.

Hoover’s headache began in 1940, when the New York Times published an interview with the famed inventor, who had fallen on hard times in his old age and was trying to sell the U.S. government on the idea of his “teleforce device,” which was actually referred to by the Times as a “Death Ray.” 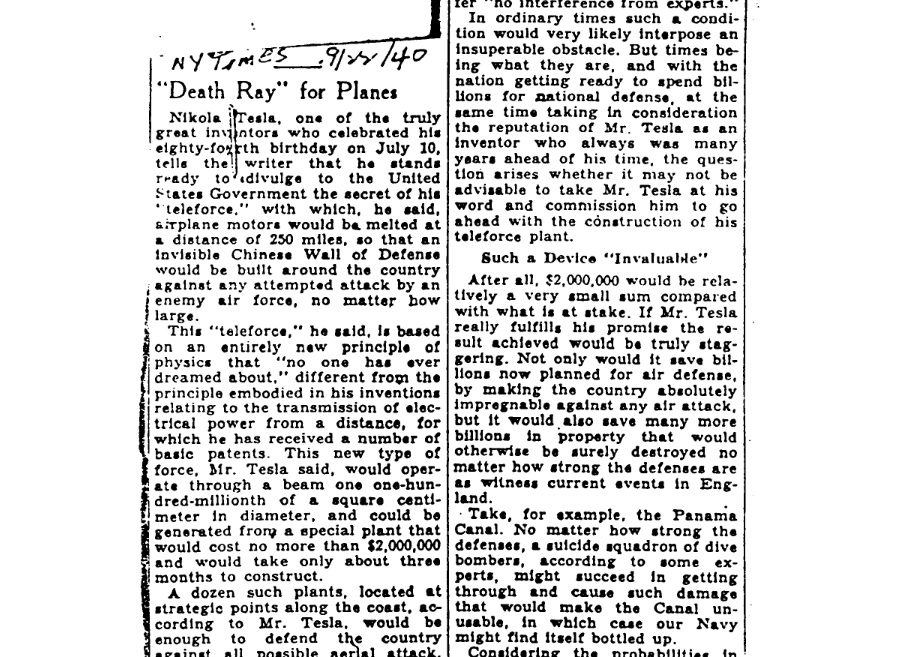 In response, Hoover began receiving letters from concerned citizens, fearing that if these plans fell in the hands of the enemy, it could turn the tide of the then-ongoing world war. 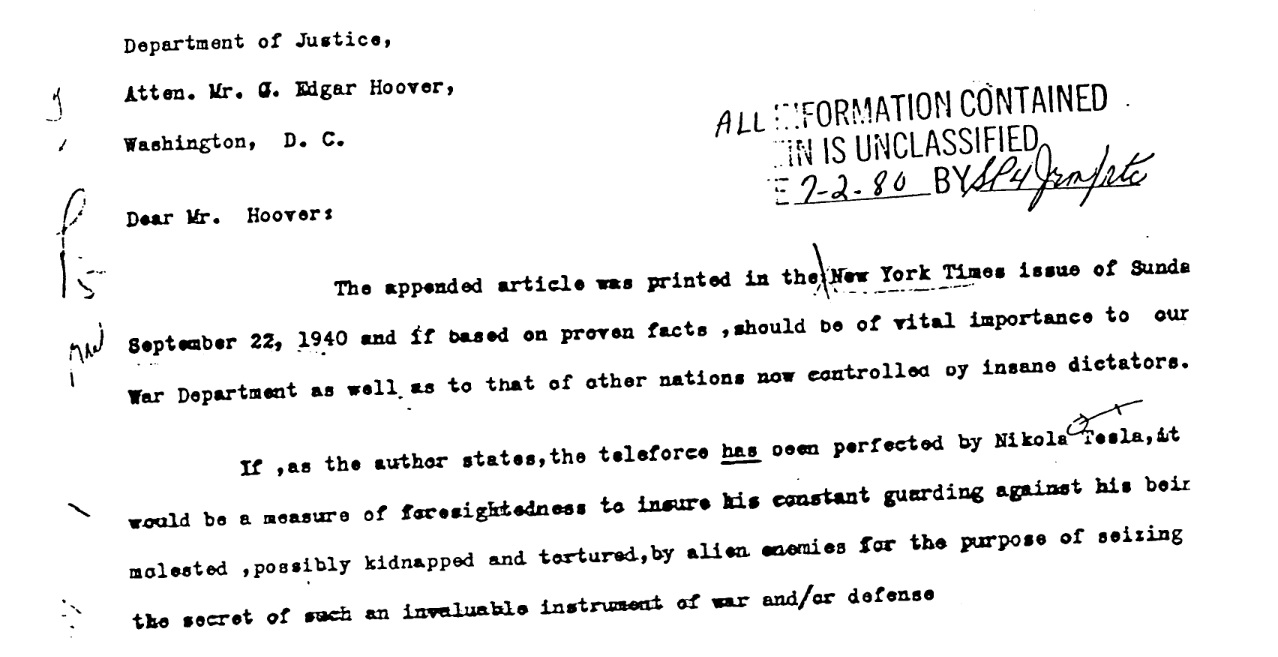 Which Hoover handled with his characteristic brusque politesse. 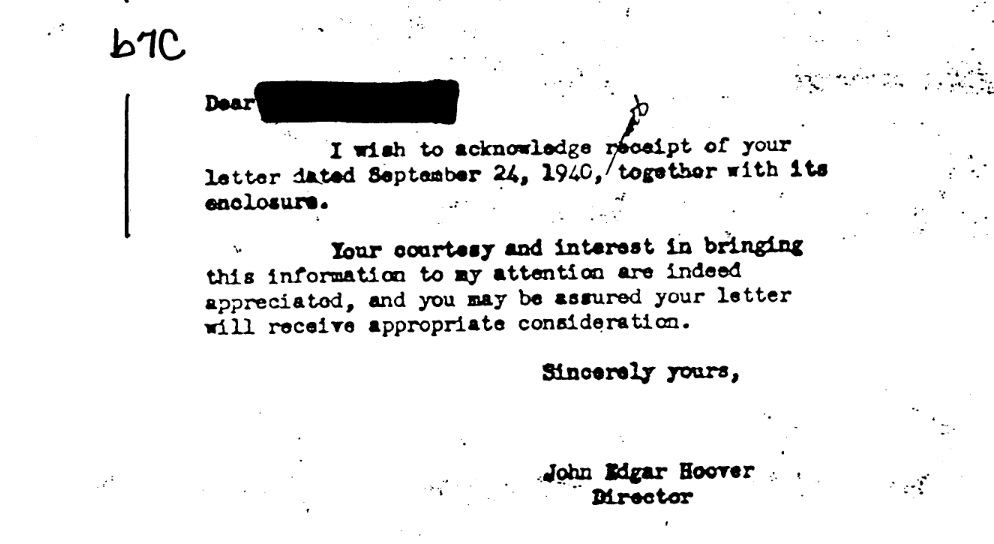 A few years later, Tesla died at the age of 87. Hoover was informed via telegram that somebody in the government had taken the warning seriously enough to send over a representative of the Office of Alien Property Custodian to take possession of any personal effects, just in case they were of the “death ray plans” variety.

The author of the telegram seemed rather doubtful on that point, noting that Tesla hadn’t been in the best mental condition for the last decade of his life and might have been exaggerating about the value of his work in order to help take care of a hotel bill.

Nevertheless, a few days later Hoover was staring down an internal memo on the subject of Tesla’s effects, and whether or not the Bureau should take a more active role in preventing them from falling into the wrong hands. One agent even suggested that the FBI arrest Tesla’s much-loathed relative to prevent him making a claim to his belongings. 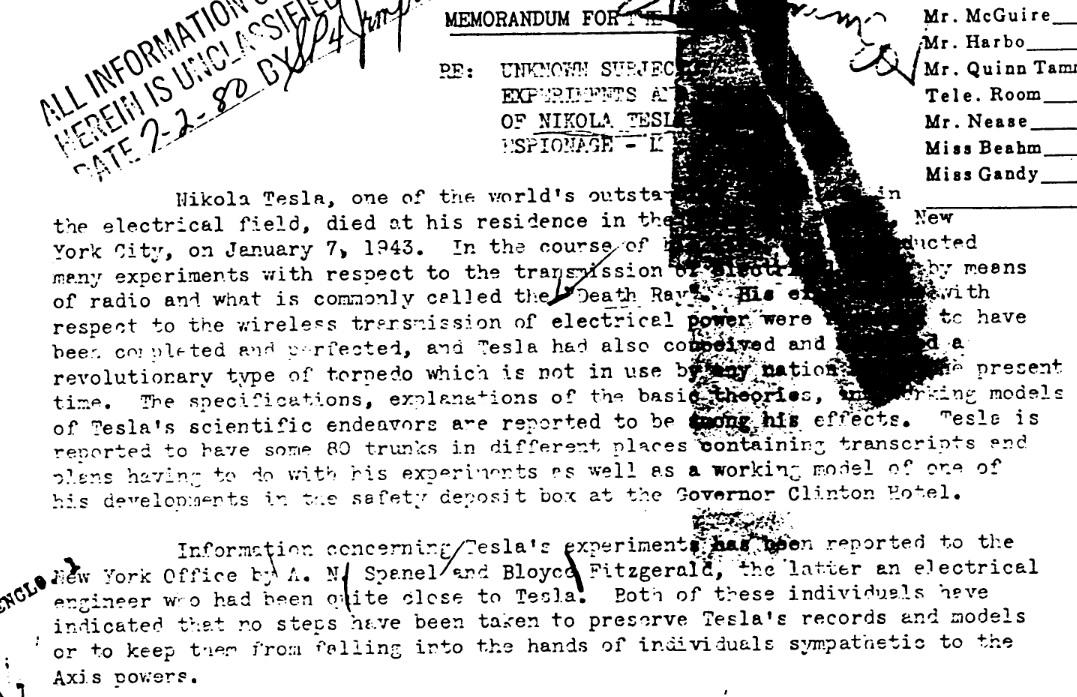 Hoover felt that the OAPC had this covered, and that there was no reason for the Bureau to “mess around in it.” 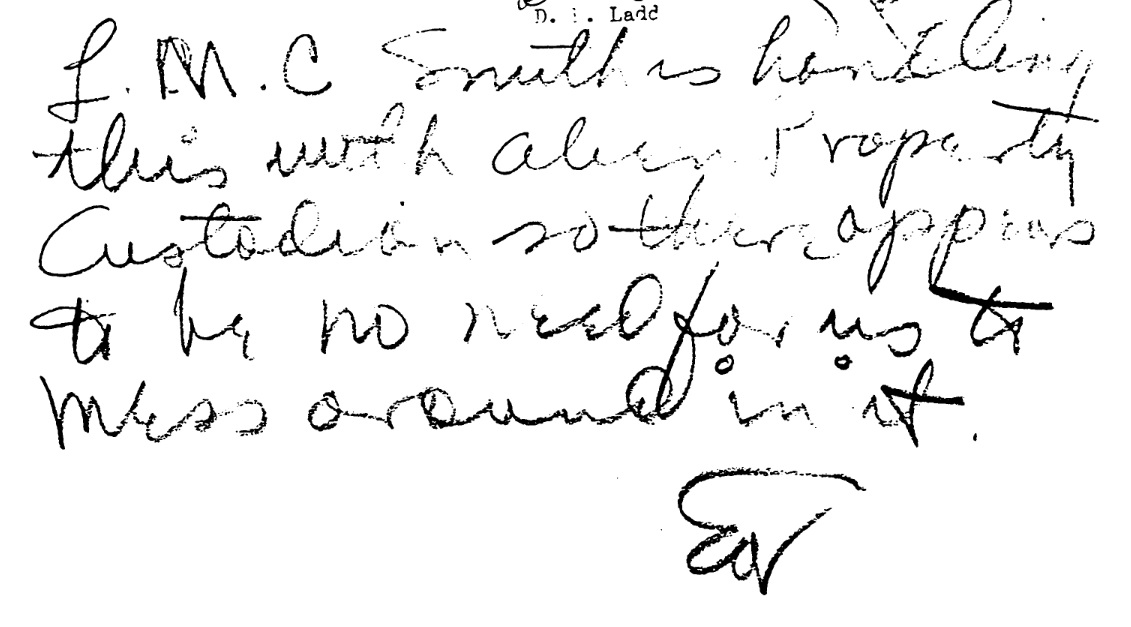 And that was that. Or so Hoover thought.

Five years later, in 1948, Hoover received the first letter of many letters asking for a Tesla’s papers, claiming that the Bureau had taken possession of them as a matter of national security. 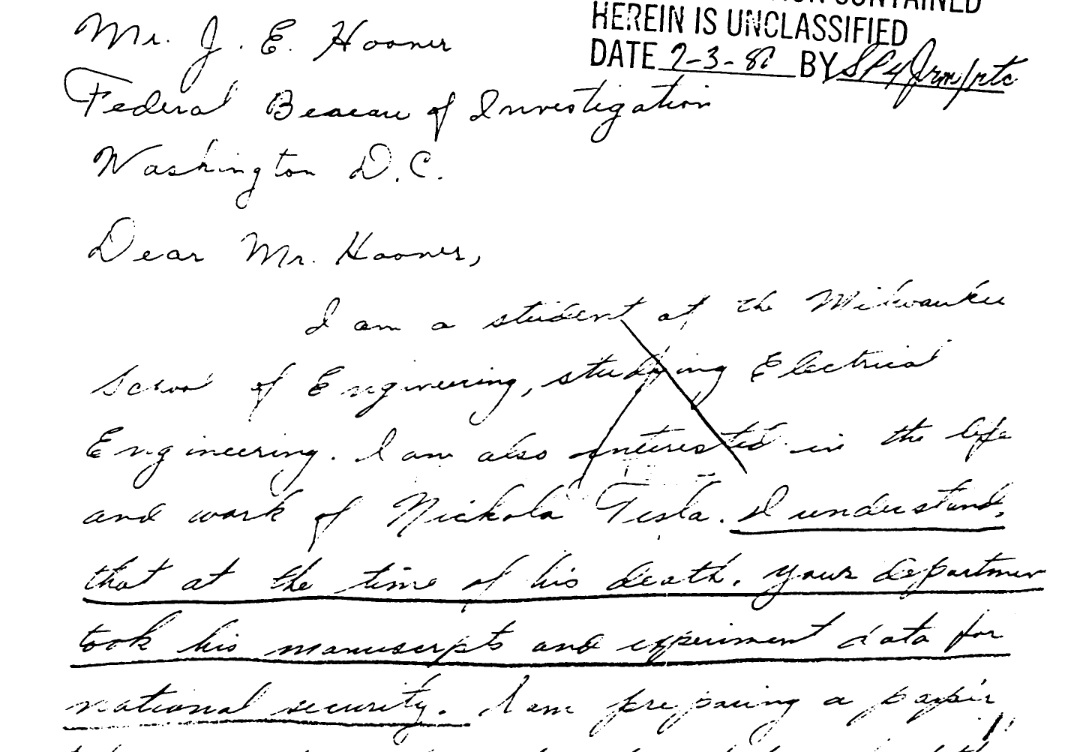 To which Hoover responded with his first of many letters explaining he had no idea what they were talking about. As far as the Bureau could tell, the papers had always been in possession of the OAPC. 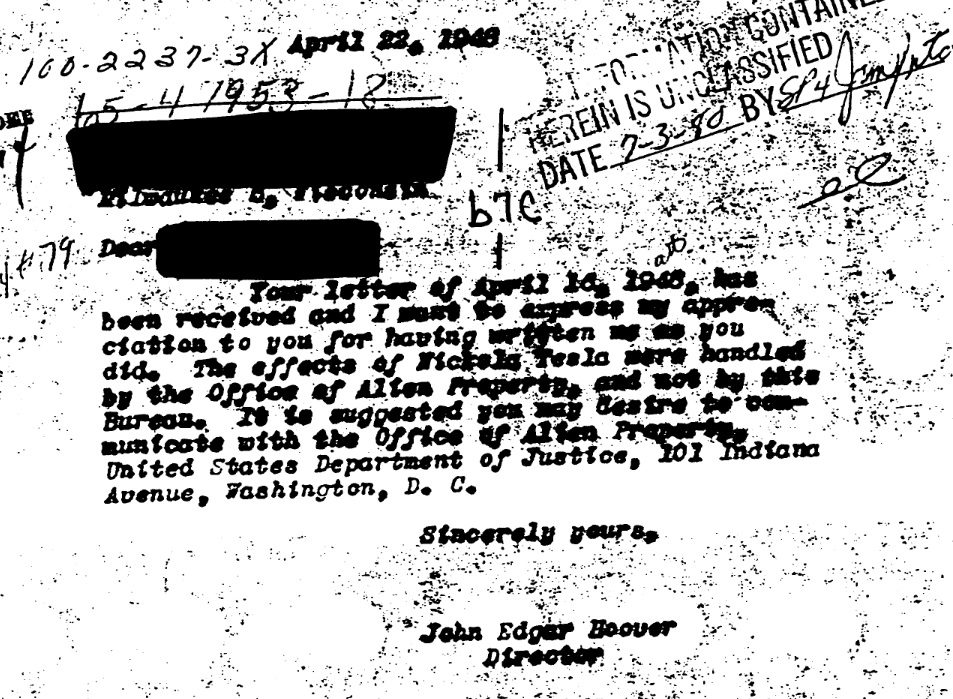 This continued for the next few years, with the Bureau receiving phone calls … 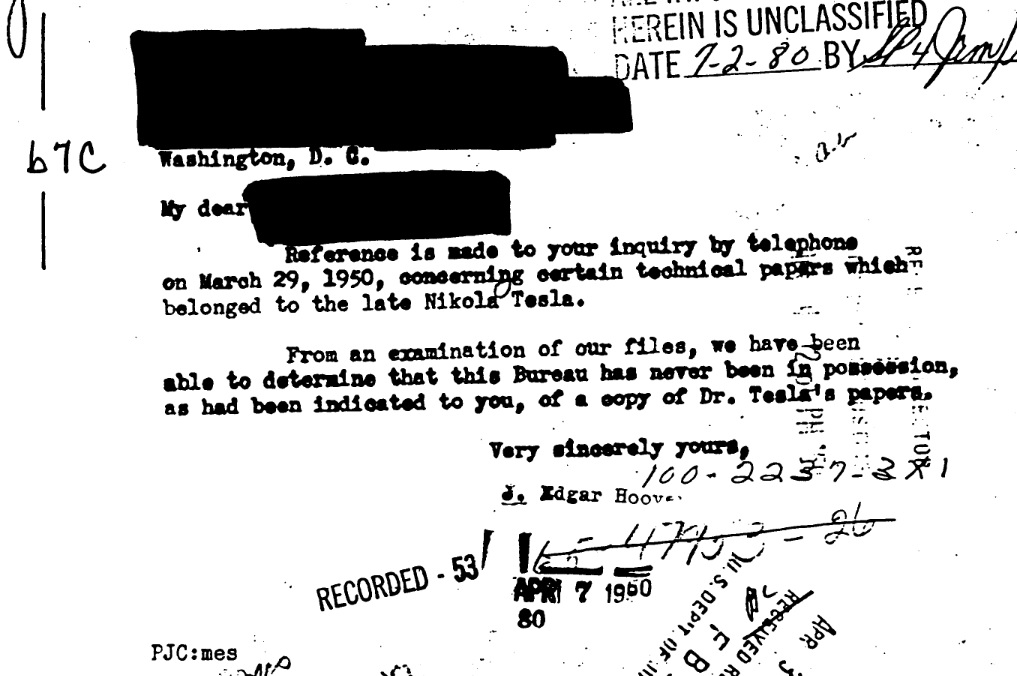 asking for scientific research they continued to insist they didn’t have. It wasn’t until 1953, five years after the first inquiry, did the Bureau finally discover the source of this claim: the 1944 biography “Prodigal Genius: The Life of Nikola Tesla.”

The Bureau tracked down a copy of the book and its offending sentence, which misidentified the FBI as the agency responsible for taking possession of Tesla’s safe. Seeing little value in correcting the record of what was then nearly a decade-old book, the Bureau just resolved to fielding the letters as they come.

Even that fatalistic attitude couldn’t prepare Hoover for what came next: a letter from Tesla’s friend Kenneth M. Swezey, who explained that he had been in contact with OAPC, and they didn’t know where Tesla’s things were, either. 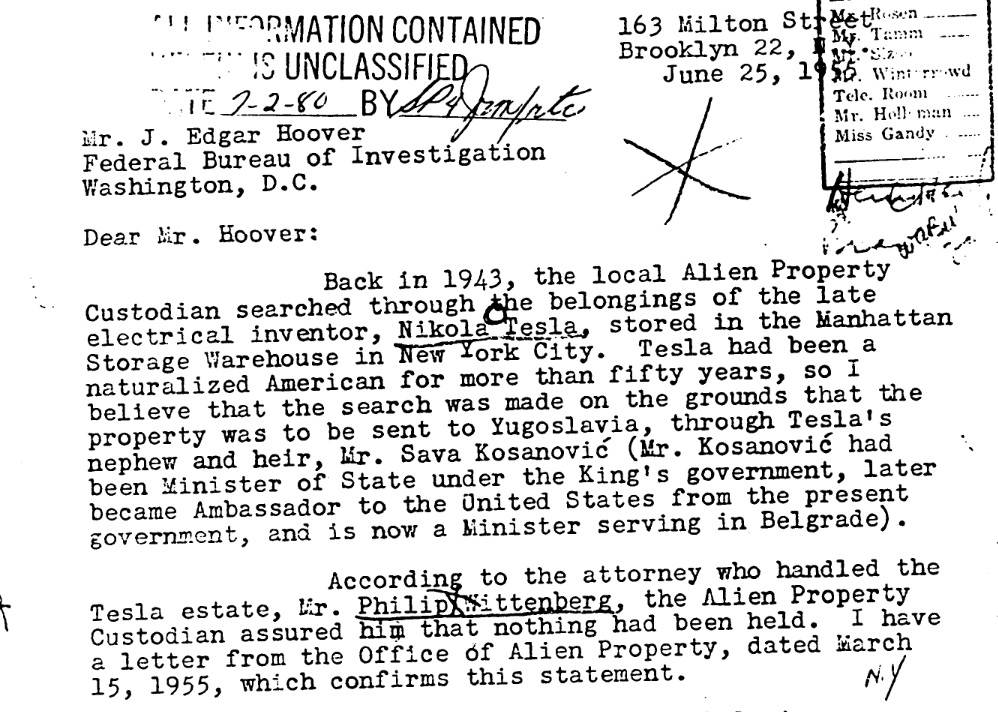 Swezey was less concerned with death rays than with Tesla’s missing Edison medal.

The medal was one of the few times Tesla had received recognition from the scientific community in his lifetime, and the fact that it had been very likely pawned off by an unscrupulous clerk was heartbreaking. Swezey wanted to know if there was anything the Bureau could do to right this injustice. 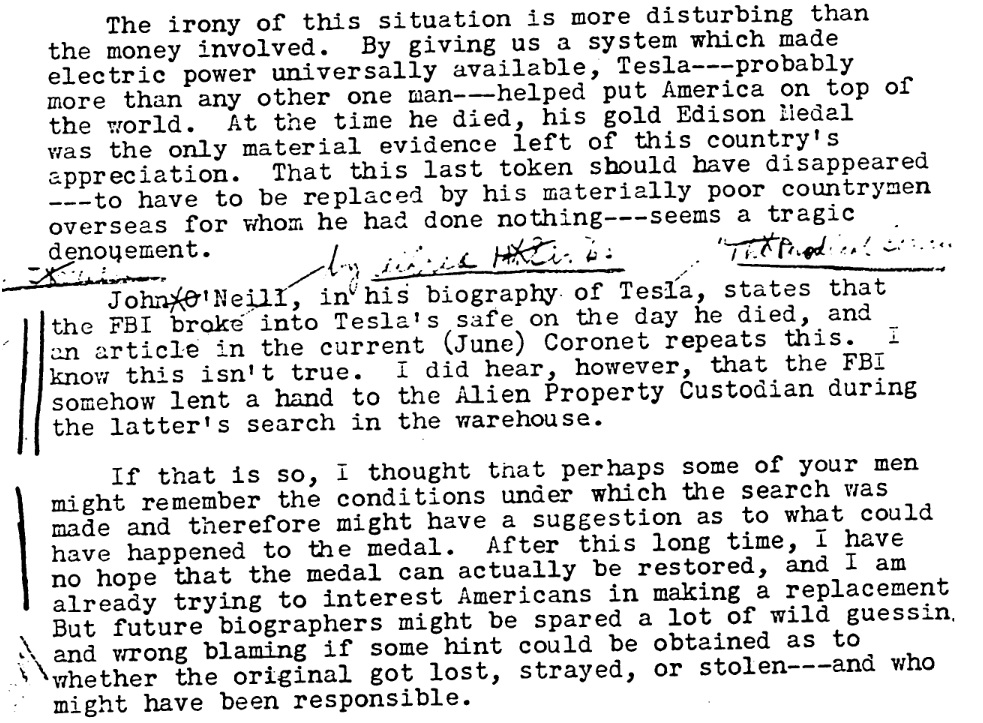 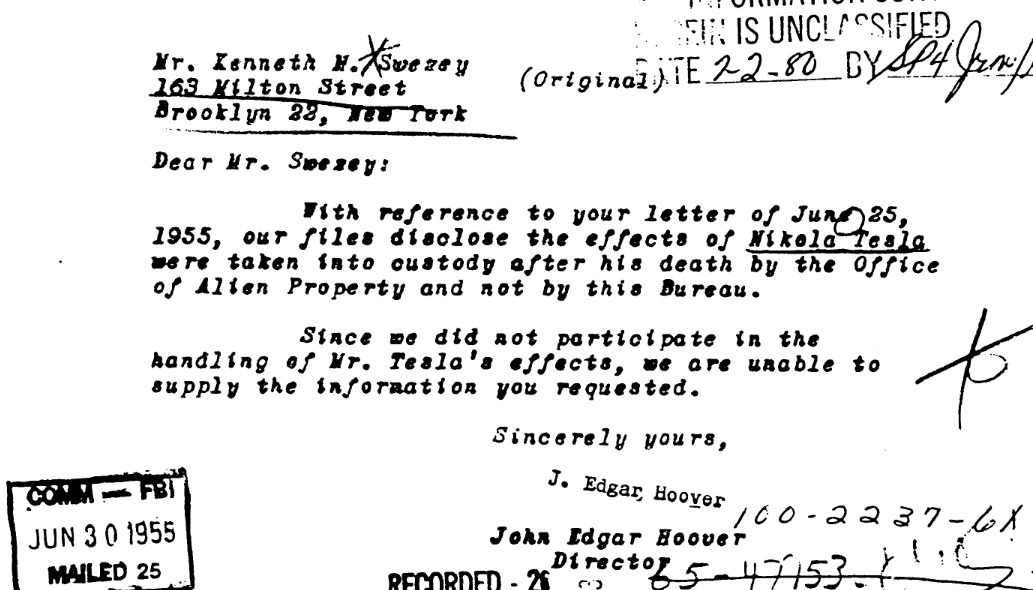 Swezey was vindicated, however, as his line about how everybody could be spared “a lot of wrong guessing and wrong blaming” if the Bureau would just make an appearance of effort proved prescient. From this point on, the FBI, usually Hoover himself, received an inquiry about the Tesla papers every other year … 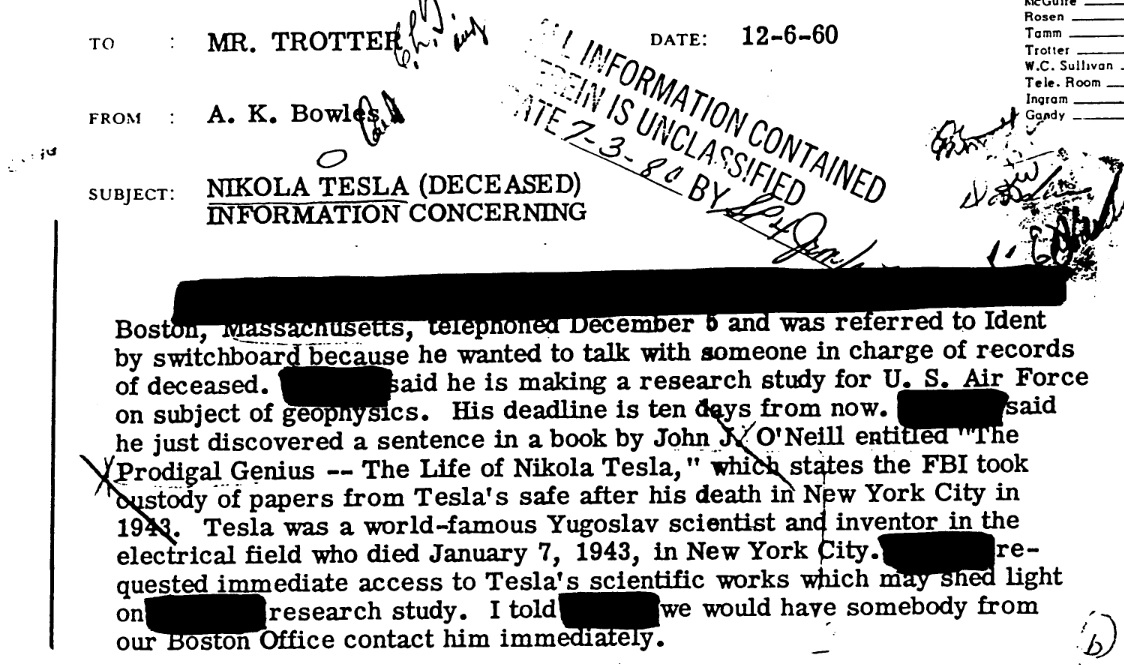 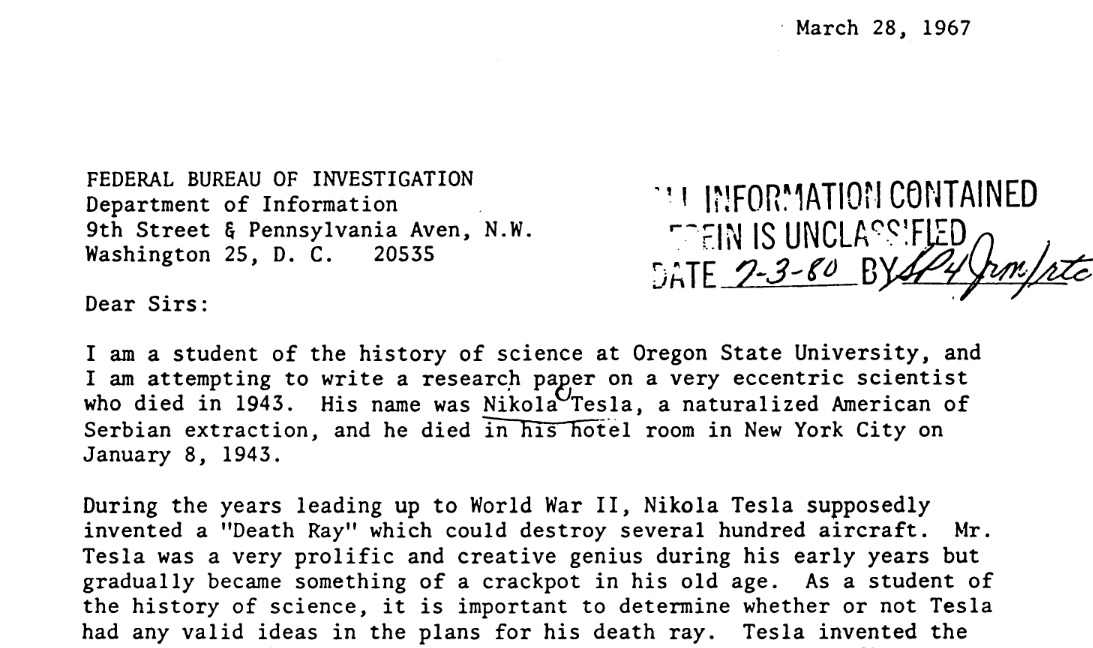 and right up until just a few months before his death, Hoover signed off on that same form letter telling people to go bug the long-since-defunct OAPC. 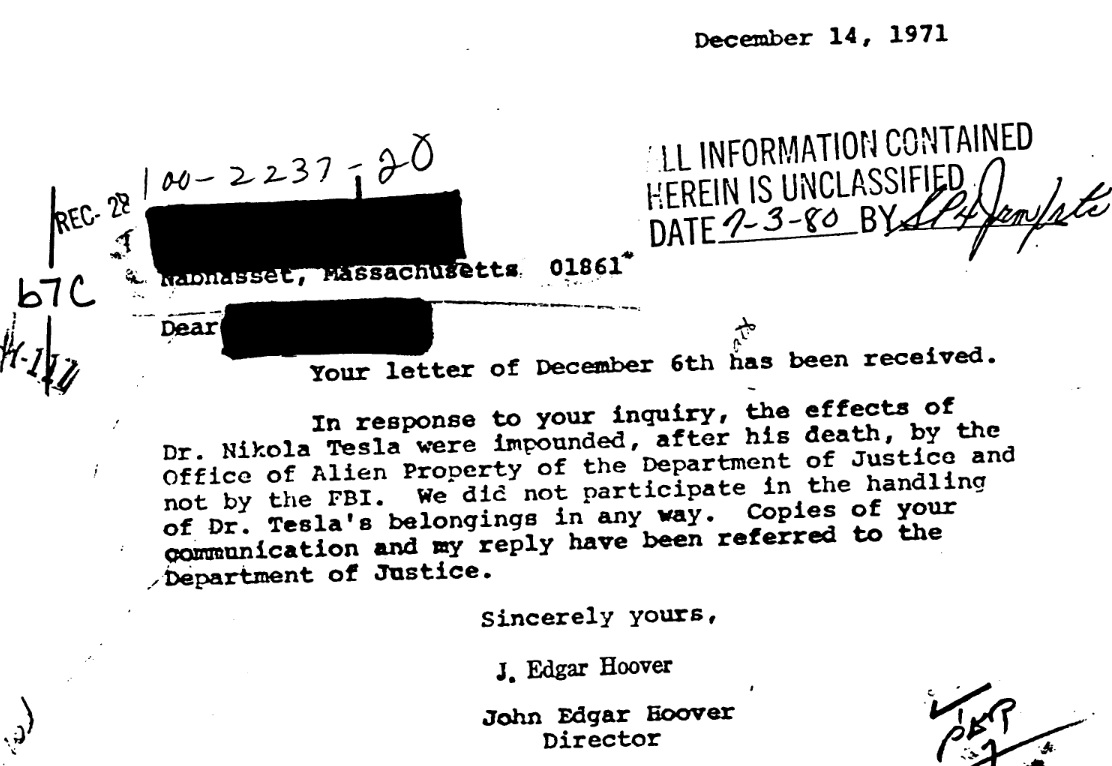 Death may have meant respite for Hoover, but the form letter wasn’t so lucky. It wasn’t long after Hoover’s funeral that Acting Director L. Patrick Grey III was called on to carry on the tradition. 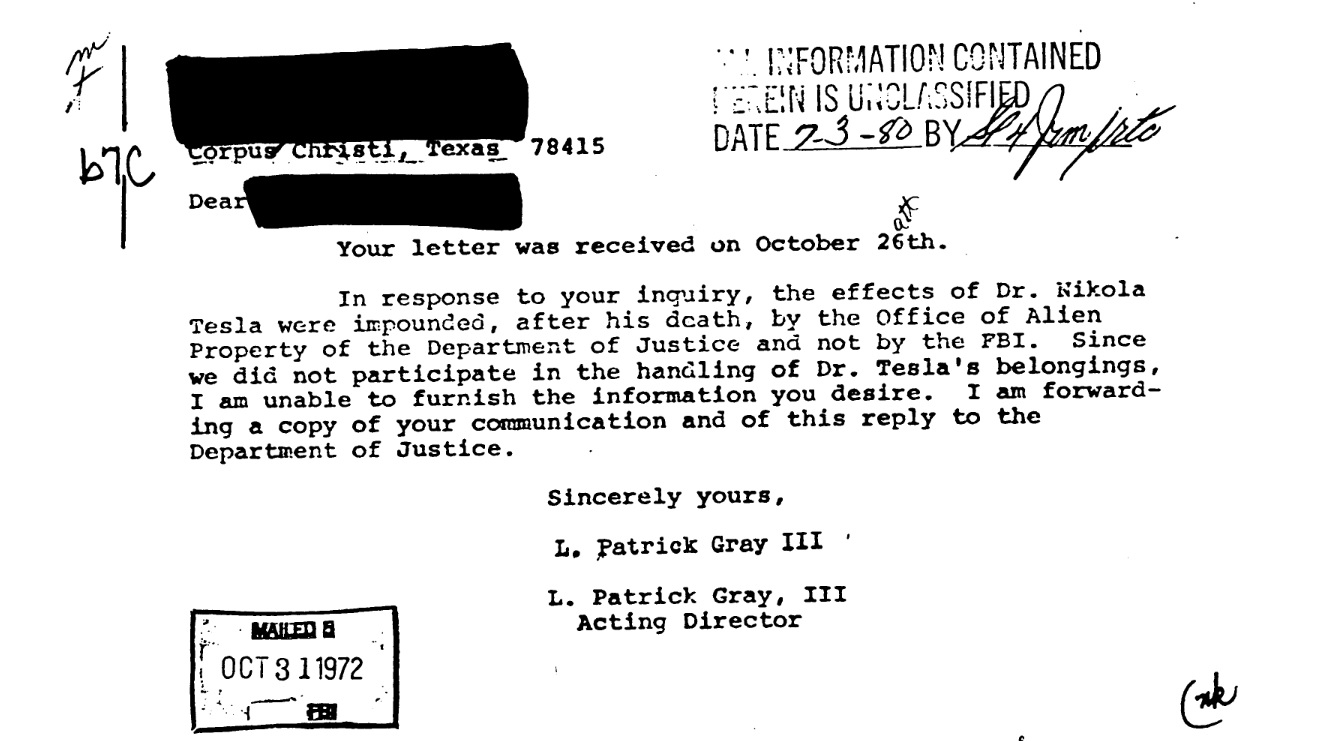 Which just goes to show: FBI directors may come and go, but a good conspiracy lives on forever. Read the preprocessed file embedded below, or on the request page.

Image by Wellcome Images via Wikimedia Commons and licensed under Creative Commons BY-SA 4.0.