For the law enforcement agency that finds itself on the examined end of an investigation, two conflicting interests rise into primary play during its public relations process. On one hand, there’s the right of the public to understand its police force’s actions and the general goodwill that can come with promoting an appearance of honesty and transparency. On the other, there’s everything that comes along with warranting an investigation.

So an interesting option being employed by departments, most recently like the Town of Hanson, Massachusetts, is to protect their internal investigations by outsourcing the investigation itself to a private third-party.

Government contracting for goods and services is no new phenomenon, and whole exemptions exist in public record law specifically protecting the plans and particulars of these private entities. But the complete restriction on results produced by outsourced investigations is a newer and more novel way of erring on the side of secrecy in the ever-important battle for the public’s right-to-know.

MuckRock user Brendan Kinsley recently ran into an unfortunate instance of willful obstruction in a recent request to Hanson. In October 2012, the police chief of the South Coast town resigned after a selectman hired APD Management to conduct an investigation into allegations that Chief Edward Savage had been inflating his department’s crime statistics.

In November 2012, The Patriot Ledger ran an article discussing the contents of the private investigation. Four and a half years later, Brendan submitted a request for the same report. But this time, it was rejected. 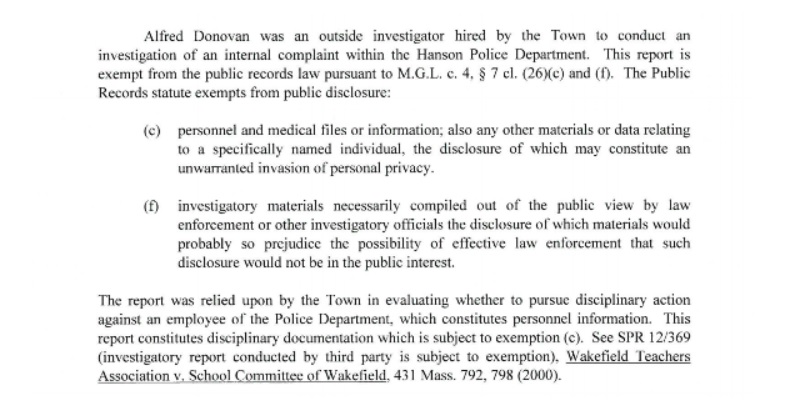 When Brendan followed up to explain that it seemed multiple outlets had been able to receive copies of the investigation, the request underwent further legal review, the result of which was a more thorough rejection.

Yes, they had previously released the report. However, that was because the Supervisor of Public Records hadn’t yet given them a reason they didn’t have to.

In 2013, the SPR, arbiter of Massachusetts public records appeals, issued an opinion on another case, this time in the Town of Cohasset, which had hired an outside investigator to look into police union grievances against the police chief. The report would be used to inform the town’s decision to rehire the chief and was ultimately deemed a personnel record and outside the scope of a public records request.

It is on this decision that the Town of Hanson is now relying to withhold materials it has already released to the public on a case that has seemed to play itself out. 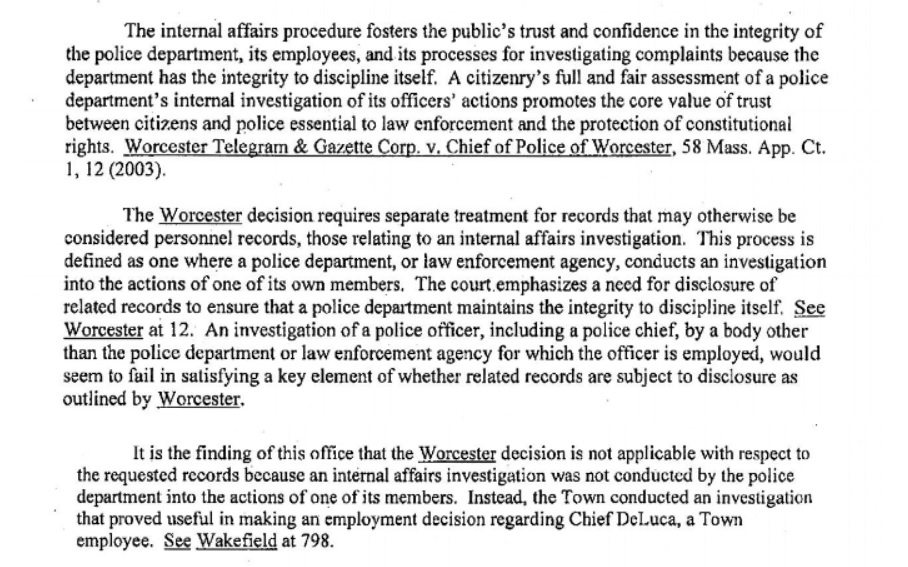 However, the circumstances in this case seem to have a few important differences. There’s no police union involvement; the allegations were brought to a town selectman. They suggested an internal investigation may not have been possible, and the one that did happen wasn’t strictly a hiring issue. And, finally, the report had already been released into the public realm.

An appeal will be sent to the Supervisor of Public Records to request reconsideration of the determination. The way to fostering healthier communication between communities and constituents might not involve retroactively covering up closed cases.

Read the full rejection embedded below, or on the request page:

Brendan Kinsley sent this request to the Hanson Town Clerk of Hanson, MA