A formerly TOP SECRET document from the NSA describes an incident which it called the “Astral Projection Caper,” which revolved around what seems to have been fabricated, or at least nonexistent, CIA evidence of confirmed psychic phenomenon.

Though the first chapter of the history is missing, another memo (seemingly from CIA) provides some insight. That memo, dated July 3, 1974, proposed an experiment where Patrick Price would be asked to use “remote viewing” to psychically gain information about a Soviet installation in the Ural Mountains. CIA already had some detailed information on the area, and so saw the opportunity to test Price’s abilities in a semi-operational setting. The experiment was to proceed in three stages: Describing the distinctive exterior features, providing floor plans and descriptions of the interior, and describing operations within the facility.

The memo noted there was some curiosity about Price himself - he had previously helped police with his apparent psychic abilities, and he seemed to be a “superpatriot” eager to join the fight against “Communist conspiracy.” However, it would be important to avoid mentioning “red-flag topics” relating to “mind-altering agents and techniques: Psychiatrists and Psychiatry, hypnosis, and psychoactive drugs.”

The memo concludes by noting that this is still in the experimental stage, despite moving “in a more practical direction with the inclusion of a real target.” If Price passed the tests CIA was setting for him, though, things would “move in a real operational direction.”

The second chapter of the NSA’s history begins with a note that a subject (seemingly Price) made a second psychic visit to an underground installation. From this psychic visit, he named several military officers who were apparently present. One of these individuals, with the US Air Force, was personally known to the author of the NSA documents. The other name was unknown, and the codenames provided seemed to have been largely unused in 1973, and apparently hadn’t been used since about 1966.

In a section dated August 8th, the NSA memo notes that “Subject” called and volunteer to locate an underground facility. He apparently “found it [and] gave its exact coordinates.” However, he hadn’t “mentioned [REDACTED] specifically, but said to be in the Ural Mountains,” which fits the proposal from CIA. He apparently provided a somewhat detailed external description of the facility. 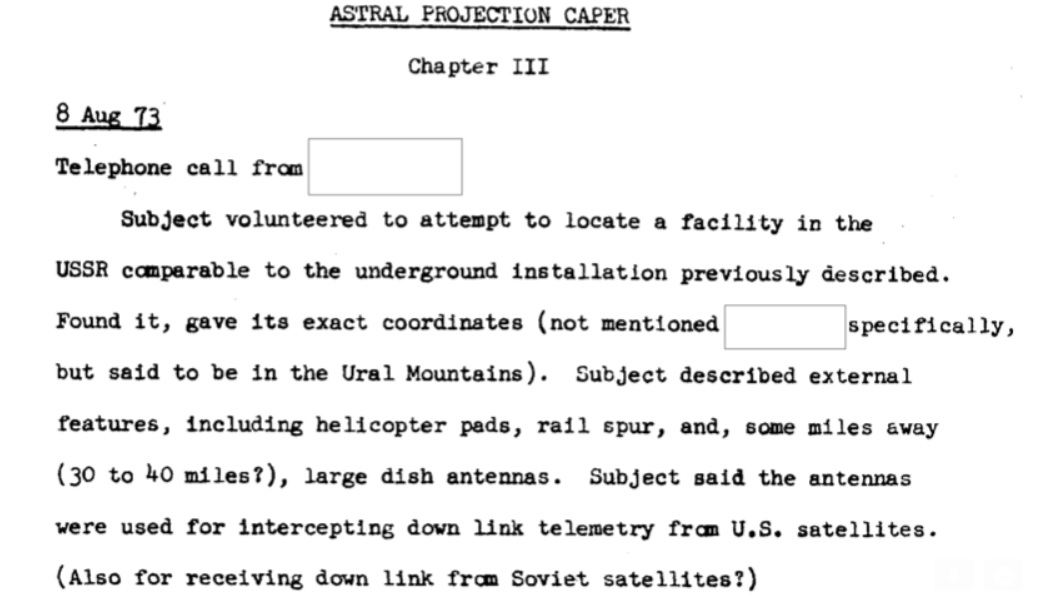 Someone at CIA apparently “found such a facility at the coordinates given by the subject.” The photographs apparently showed antennae dishes as predicted, albeit a different number of them and in different dimensions.

In what was initially described as a “double-blind experiment”, the subject was given the coordinates of a small island. The subject supposedly then drew “an absolutely accurate topographical map of the island” and described what was happening on it.

While this sounds impressive, it’s undermined by a later entry in the caper, which notes that while the island does exist, it isn’t Soviet controlled territory, and doesn’t resemble the maps drawn by the subject. To confuse matters more, NSA then reported that they didn’t find anything within a 25-mile radius of the coordinates they were given for the Ural Mountains target.

NSA apparently didn’t try to reconcile this with the report of CIA’s finding, though they did expand the search. It’s not currently clear what the end result of this was, or if the discrepancies were ever explained.