The FBI file on Majestic-12 may be the Bureau’s most X-Filesy file of all - full of hoaxes, planted documents, and allegations of aliens. The Bureau, however, was essentially disinterested in the case, did no actual investigating, and barely pursued the very real crime that had been committed by forging government documents, only adding fuel to the suspicion that the papers were government sponsored, or at least tolerated, disinformation.

According to the stories, Majestic-12 was a secret group of high level government employees working to deal with UFOs and recovered alien craft. From 1984 through 1988, a number of documents turned up in the mailboxes of researchers and, in one instance, at the National Archives. Despite seeming to use real signatures and being found in the National Archives, the documents were determined to be part of a hoax for a number of technical reasons, not the least of which include the real signatures having been copied from other documents. 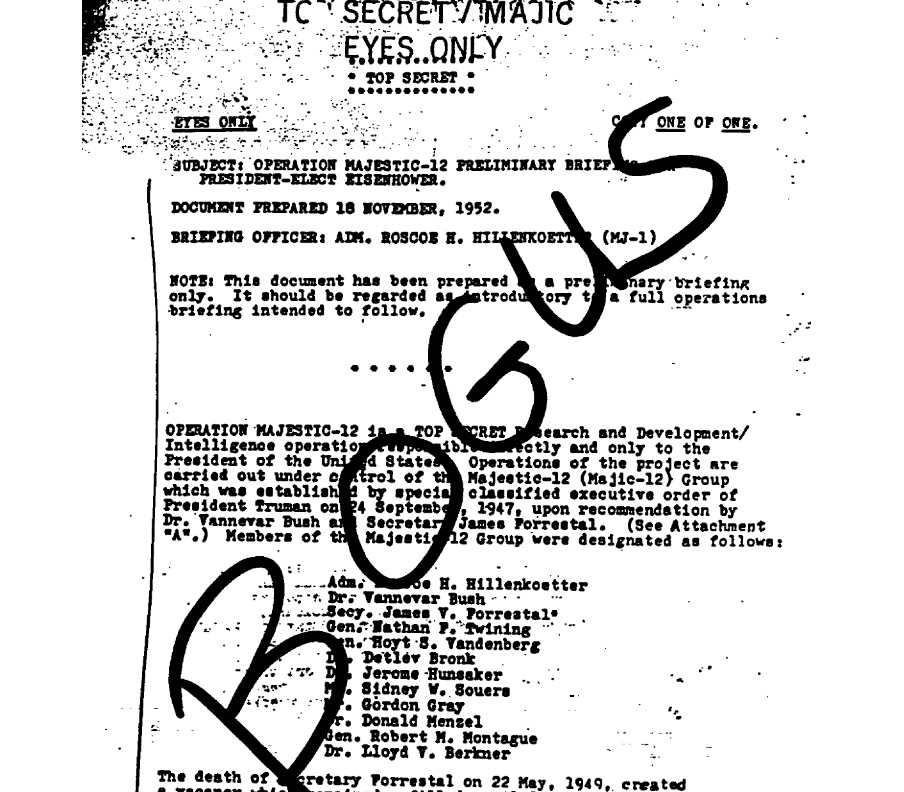 Since then, some have speculated that the documents had been forged by the government to supplement ongoing disinformation programs designed to distract from actual U.S. government activities, such as the use of spy planes, by encouraging the public to believe that the Unidentified Flying Objects they saw were extraterrestrial. According to one CIA study, over half the UFOs spotted in the 1950s and 1960s were U.S. Air Force plans such as the SR-71. This “led the Air Force to make misleading and deceptive statements to the public in order to allay public fears and to protect an extraordinarily sensitive national security project. While perhaps justified, this deception added fuel to the later conspiracy theories and the cover-up controversy of the 1970s.” Perhaps the most infamous example of one of these misleading statements comes from the patently false explanation that the Roswell crash was an ordinary weather balloon instead of a specialized balloon for Project MOGUL.

There’s no reason to believe that this “white lie” approach, as the New York Times called it, would be abandoned in the ensuing decades. Whether or not this would have included the government fabricating and releasing documents to encourage the conspiracy theories which distracted from the truth is an open question, but it seems likely that the government was willing to tolerate it. Despite having at least four different statutes that they could have used to prosecute the forger depending on the circumstances of the case, the declassified FBI file shows that once they announced the files had been forged, the case was closed. Despite the FBI saying they looked into this case because of “a potential violation of federal law under our jurisdiction that we did investigate,“ the Bureau neither investigated the espionage angle they opened the file for, nor any of the potential violations of federal law involved in forging government documents.

The files also show that it took the FBI and the Air Force four years to become interested in the case. According to the FBI file, captioned ESP-X for Espionage X, the Bureau and the Air Force only took notice after an Air Force Office of Special Investigations (OSI) Special Agent was given an a copy of one of the Majestic-12 documents, by “an individual at the school.” 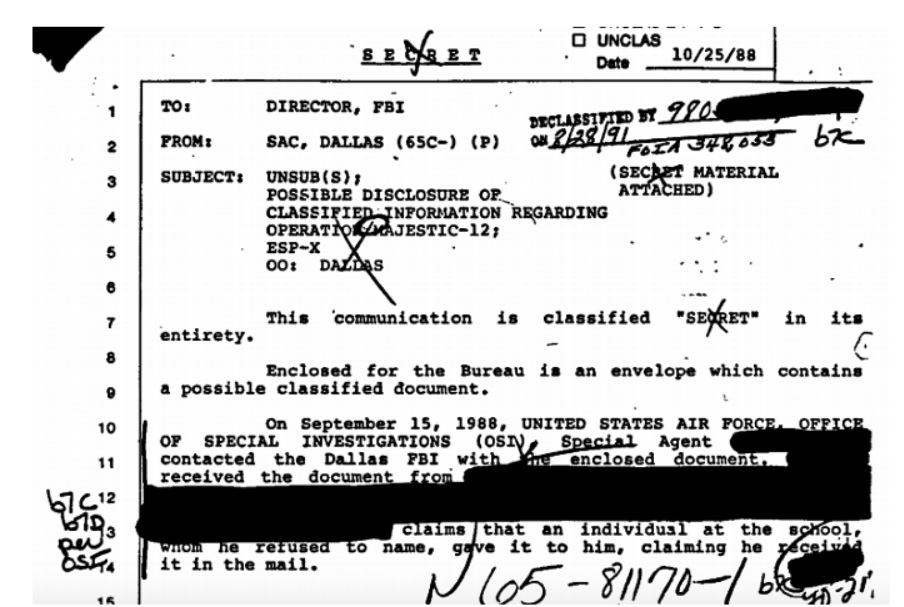 The FBI and OSI initially took the document seriously, noting that it had been discussed in the last six weeks, apparently ignorant of the fact that Majestic-12 had been under discussion since 1984. They noted that Project GRUDGE, mentioned within the document, was real - but that they were unsure if the document “had been properly declassified.” OSI requested the FBI find out if it was still classified or not. A few days later, another request was sent by the OSI asking the Bureau to look into the matter. While this request is omitted from the file, without a withdrawal sheet to identify or explain whatever exemption justified that, it is referenced in a later memo that clarified it was not a Halloween prank.

If the FBI took any action on the case at all, it’s omitted from the file without justification. According to the file, the Bureau took no action on the case. Instead, a month after the OSI requested the Bureau look into the matter, the OSI informed the Bureau that the document “was fabricated” and “completely bogus.” Having been informed that there was no secret government cabal dealing with aliens and UFOs, the FBI decided to close the case.

The second page of the memo, which likely contained specific information about what the OSI told the FBI, was copied in a way that made the entirety of the text not only illegible, but virtually invisible.

The third page, consisting of a single sentence, provides some minimal information about the previous page, including that the OSI was now requesting the Bureau close the case. This notably contradicts the FBI’s assertion on its lists of myths that “the Bureau concluded that the document was a fake,” as the documents show that the Bureau was simply told this and promptly closed the case without doing any investigating.

Several years later, the case would be reopened when someone found a copy of other Majestic-12 documents laying on the lobby floor of their unidentified workplace. As the documents had markings that claimed they were classified, the individual decided to call the FBI.

The FBI once again requested input from the Department of Defense and the OSI to determine if they had any interest in the “unusual document.” Any response from the OSI or follow-up on the part of the Bureau was omitted, though it may be released as part of pending FOIA request on additional Majestic-12 documents, which will hopefully fill in the blanks on the FBI’s “investigation” or why they apparently showed no interest in pursuing any of the laws that may have allowed prosecution of the forger who had spread disinformation about the United States. In the meantime, you can read the FBI file on the Majestic-12 forgeries below, including copies of some of the forged papers.