Countering Violent Extremism (CVE) initiatives rest on the core assumption that it is possible to detect and stop violent extremists before they carry out violence. This assumption forms the basis for innumerable theories of radicalization which identify behaviors that are thought to be “indicators” or “risk factors” of violent extremism.

This logic is the driving force behind the National Counterterrorism Center’s (NCTC) annual handbook for law enforcement agencies — with input from DHS, FBI, NSA, and other agencies — providing guidance on spotting indicators of mobilization to violence among homegrown violent extremists.

The 2017 handbook was provided to law enforcement agencies but has since “appeared on several publicly accessible law enforcement mailing lists and conference websites,” according to Public Intelligence which has made the handbook publicly available. 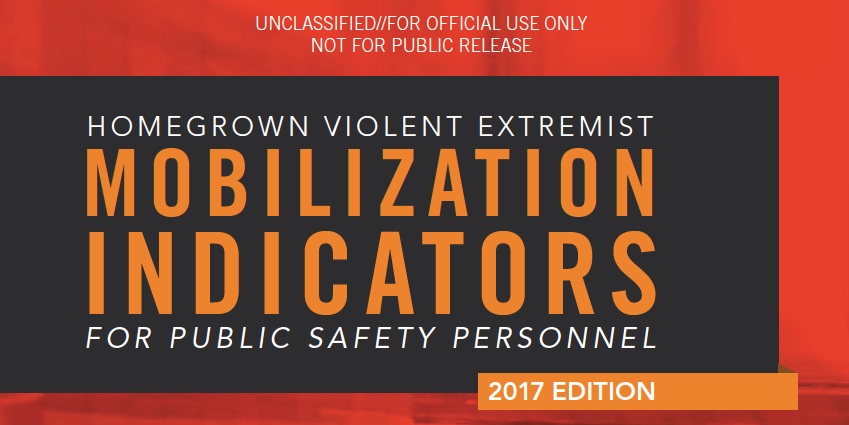 Much as the Obama administration’s Strategic Implementation Plan for CVE prioritized violent extremism “inspired by al-Qa’ida and its affiliates and adherents,” the NCTC notes that it focuses on “international terrorism,” rather than far-right or white supremacist extremism. 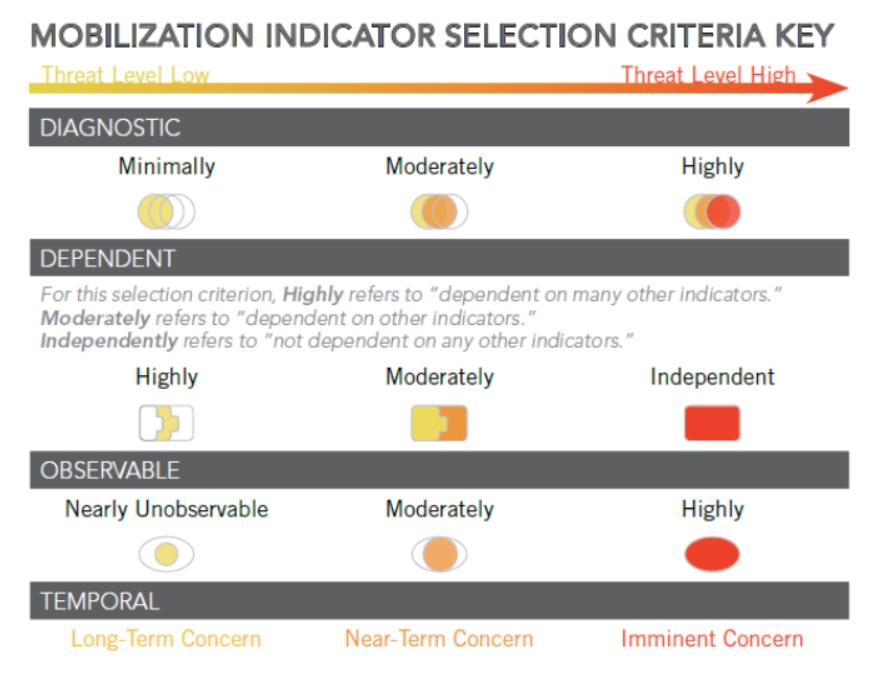 Some behaviors included in the handbook do in fact raise concerns about an individual’s potential mobilization to violence, particularly those included in Group A. This includes behaviors such as “preparing and disseminating a last will or martyrdom video/statement” and “seeking help from family or friends to enable travel to join terrorist groups overseas.” 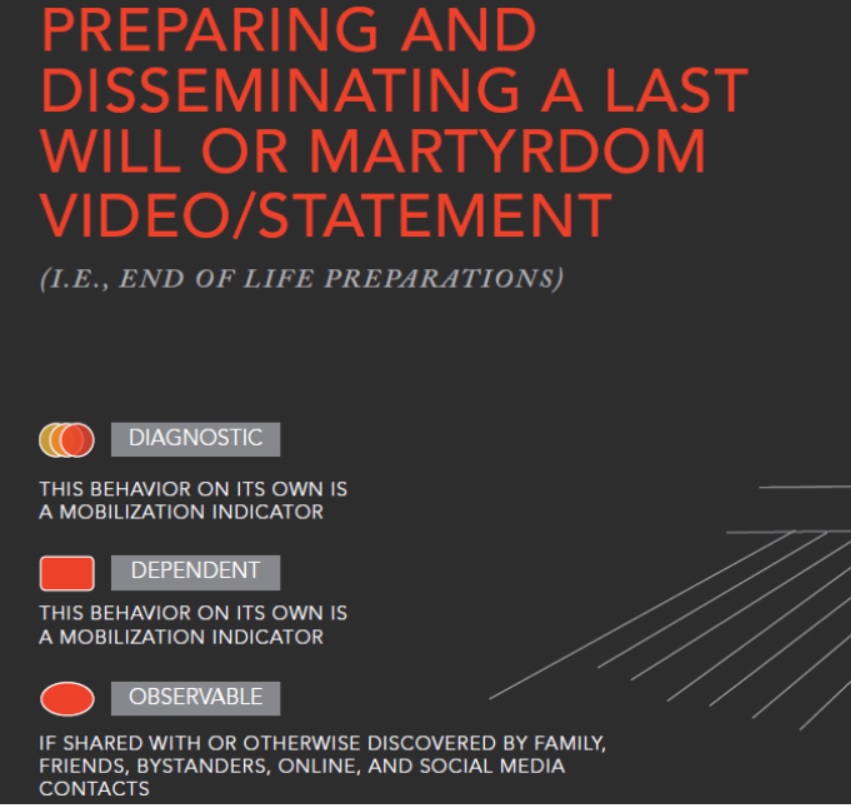 Other behaviors, particularly those included in Groups B and C, are so broad as to be meaningless. This includes the “use of encrypted media applications to engage with unknown overseas individuals,” “blaming external factors for failure in school, career, or relationships, and “expressing frustration with employment situation (underemployment/loss of job or status).” 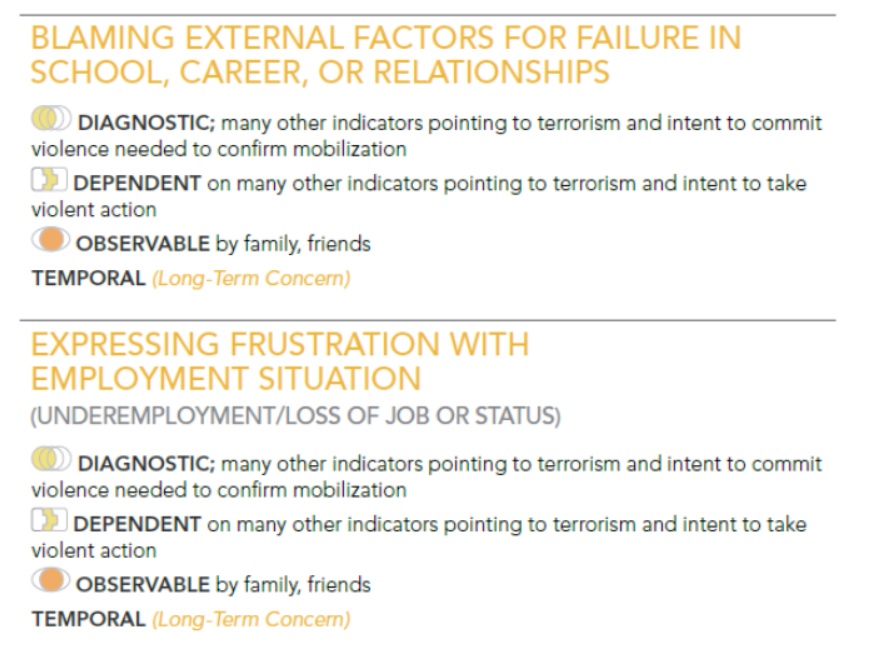 The handbook does indicate that these indicators are “dependent on many other factors pointing to terrorism and intent to take action” but it is unclear why such factors are relevant at all in the presence of other factors “pointing to intent to commit violence.”

Some behaviors included in the handbook seem to indicate that propagation of conservative variants of Islam is worthy of suspicion. 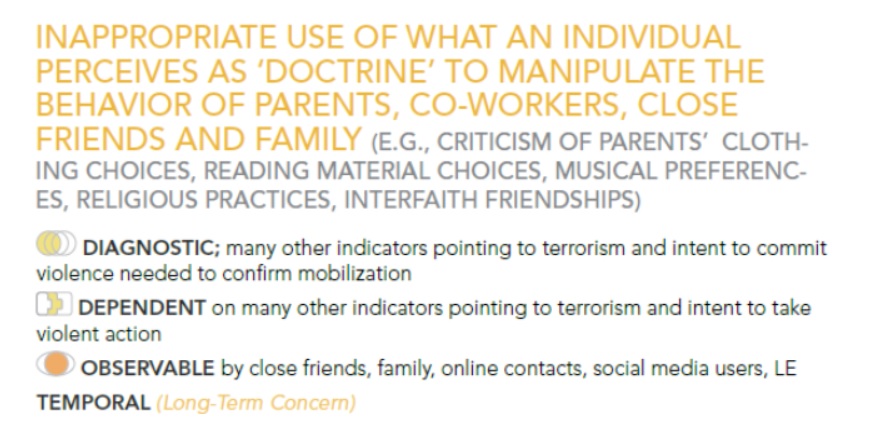 Other behaviors included in the handbook have previously been looked at as suspicious by law enforcement agencies and have been used as a pretext for surveillance of Muslim communities. One behavior identified as an indicator of mobilization to violence, for example, is “creating or engaging in physical or virtual simulations of an attack/assault.”

In 2011, the NYPD infiltrated the city’s colleges and monitored Muslim students online - even sending agents to their meetings - because it was worried about these students organizing “militant paintball trips.” The NYPD’s Demographics Unit, as it was known, failed to yield a single piece of actionable intelligence.

Given its inclusion in previous CVE initiatives, it is not surprising to find that “promoting extremist narratives” is also included in the handbook as an indicator of mobilization to violence. These narratives include the idea that “the West is at war with Islam” and that “leaders of Muslim countries are apostates.”

The handbook does not engage with such questions nor does it provide a methodology for why certain behaviors are included or what combinations of behaviors would approach “diagnosticity.” Instead, it merely provides a broad list of behaviors which may indicate an individuals’ propensity to carry out a terrorist attack.

Read the full handbook embedded below.