Documents unsealed this week illuminate why the district attorney in Boston subpoenaed Twitter for information about one of its users in 2011, and why prosecutors asked the court to keep the records secret. The lead prosecutor said his office feared Anonymous or other hacktivists might attack his office’s website if the case garnered too much publicity. 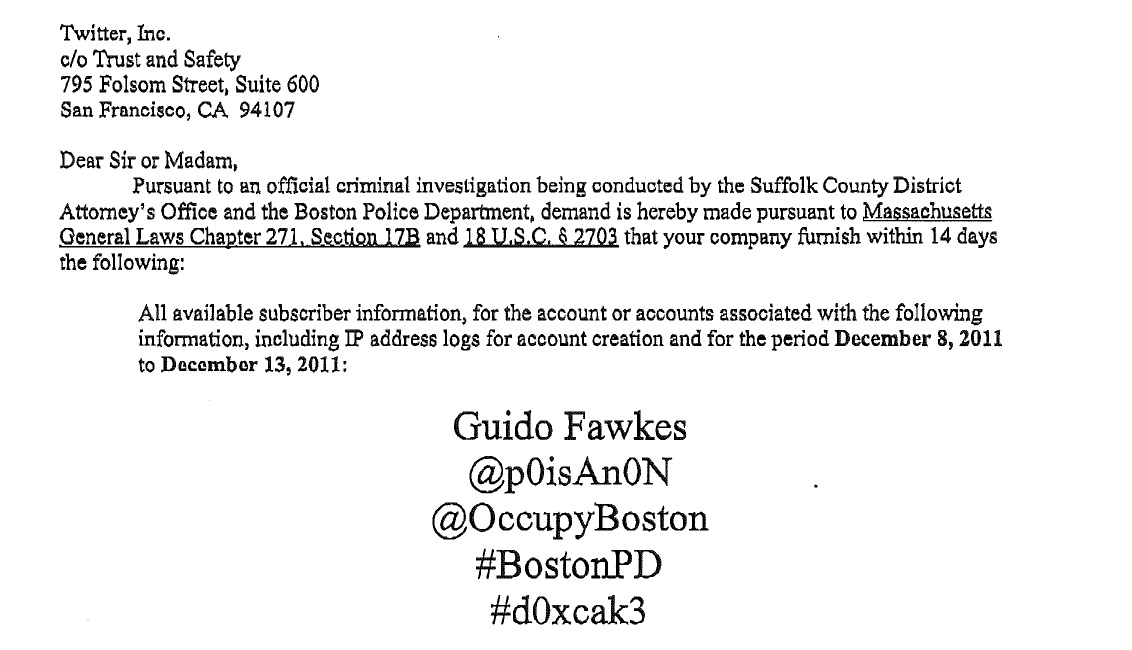 Fawkes and his lawyers at the American Civil Liberties Union of Massachusetts sought to block the order on free speech and privacy grounds. But Fawkes lost, and Twitter complied with the subpoena in early March 2012.

Since prosecutors secured an impoundment order, the court file was sealed and Fawkes’s attorneys were gagged from discussing the proceedings in any detail. And so, despite its potential implications for the right to online anonymity, precious little about the legal battle was public.

But last month, I asked the court to open the Fawkes file, which otherwise would have remained sealed until 2022. My attorney, Jeff Pyle of Prince Lobel Tye LLP, submitted a joint motion with the ACLU of Massachusetts, which filed on behalf of its technology fellow, Nasser Eledroos.

Prosecutors now agree that the Fawkes file should be public.

“There is no longer good cause to impound the matter,” wrote assistant district attorney Donna Patalano in a motion filed and approved on Wednesday.

We are still reviewing the hefty file, and will continue to post documents as we review them. But already new details are emerging about Boston prosecutors’ case to unmask Fawkes while sealing their own legal briefs.

Among the liberated documents is a December 2011 affidavit filed by Benjamin Goldberger, the prosecutor who signed the Twitter subpoena and who now works in the office of Massachusetts governor Charlie Baker.

The weekend after the Fawkes subpoena was publicized, Goldberger told the court, he received a blitz of emails that his office was investigating as a possible attempt to compromise email servers. The next week, the Suffolk DA’s website was the subject of “an attempted intrusion” as well as a denial of service attack, Goldberger indicated.

“Based on its timing, it appears that this attack too was in retaliation for my issuing the subpoena,” Goldberger asserted. He argued that sealing proceedings was necessary to head off any more such attacks. 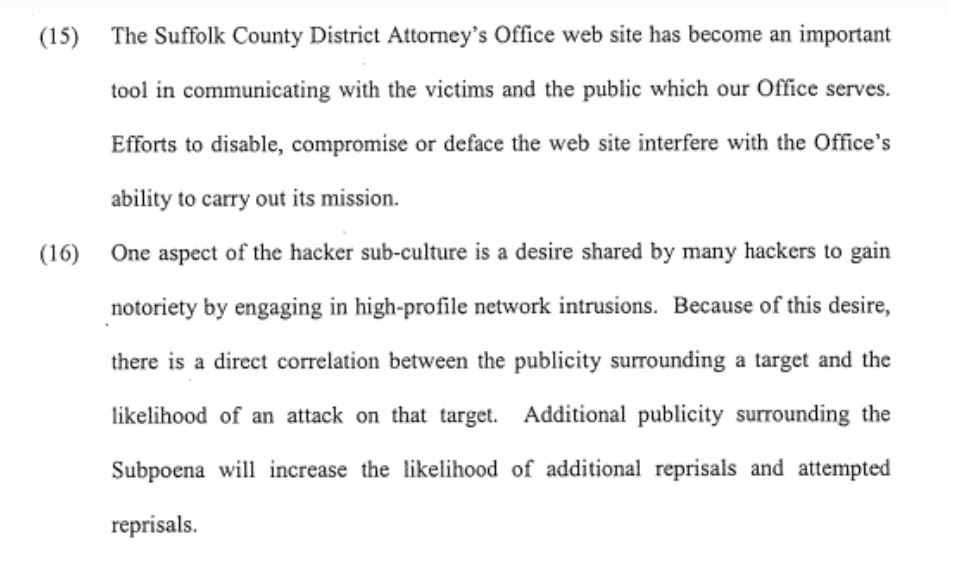 “Additional publicity surrounding the subpoena will increase the likelihood of additional reprisals and attempted reprisals,” he wrote. Denying the motion to seal, Goldberger argued, “will likely contribute to members of ‘Anonymous’ engaging in future criminal acts.”

A Suffolk County judge granted Goldberger’s motion, and her decision was upheld on appeal to a justice of the state’s top court. After Twitter complied with Goldberger’s subpoena, the Fawkes file was ordered to be sealed for ten years absent further litigation.

“We only just now, as a result of this lawsuit, learned that these records had to be secret from the people of Massachusetts because, the DA claimed, if they became public, members of the loosely-knit group ‘Anonymous’ might be inspired to hack websites,” said Kade Crockford of the ACLU of Massachusetts when the file was ordered unsealed.

These unsealed records enshrine the state of legal arguments about online anonymity at a critical point. The Fawkes Twitter subpoena was one of the earliest and most public cases where law enforcement sought to obtain investigative information from a social media platform.

This practice has become more and more common in the intervening five years, and it’s not going anywhere. The Fawkes case helps us trace the evolution of both law and practice on social media monitoring in domestic law enforcement.

Check back as we dig into the court file and request documents from other government agencies. In the meantime, read the full Goldberger affidavit embedded below:

Image by Florian Belmonte via Wikimedia Commons and licensed under Creative Commons BY-SA 4.0.