Earlier this week, the Washington Post made headlines of its own for reporting that “intelligence sources” were saying Russia had hacked into the U.S. power grid, which is a thing that did not happen. In fact, this wasn’t even the first time it hadn’t happened - just five years ago, a Senate report tore into Homeland Security for making the same claims with even less evidence.

At MuckRock, we’ve written at length about fusion centers - post-9/11 intelligence sharing outfits created to streamline communications between local and federal law enforcement - and how bad they are at their jobs. And we mean bad. So bad, indeed, that in 2012, there was a Senate hearing to get to the bottom of this badness, and it was brutal. How brutal?

For example, particular attention was paid to the “success stories” that DHS chose to highlight as examples of the program’s effectiveness - such as the time they alerted the nation that Russia had penetrated Indiana’s utility grid to disable a water pump, effectively declaring cyberwar. 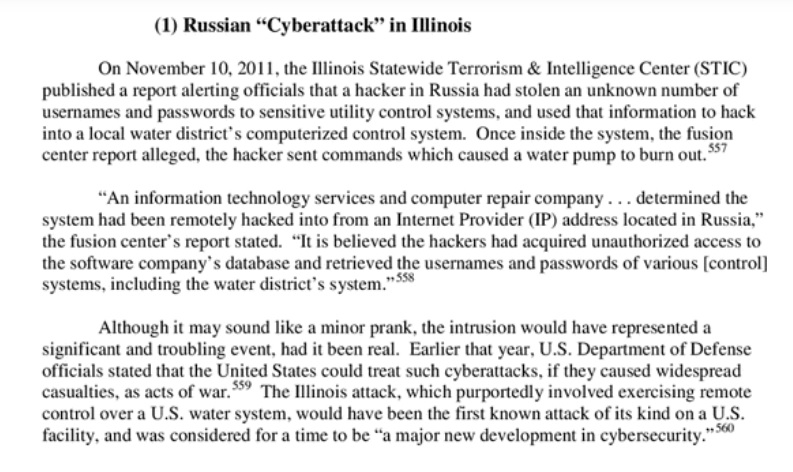 If you’re wondering how something so momentous managed to slip by your radar, the answer’s pretty simple: it didn’t happen. The “remote access from Russia” was by a plant employee, vacationing in Russia, logging on remotely using his own username and password - five months before the pump broke.

Can see why he’d be a bit miffed, there.

So now, if you’re wondering how, even though nearly every detail of the report turned out to be complete fabrication …

DHS still managed to decide that this was one for its year-end scrapbook, the answer, once again, is pretty simple: they just re-defined what “success” is.

And yes, these are indeed the same fusion centers that were spoken of so glowingly in yesterday’s Senate hearing on Russian hacking.

The full report is embedded below.

JPat Brown sent this request to the Department of Homeland Security, Office of Intelligence & Analysis of the United States of America