A classified government document opens with “an odd sequence of events relating to parapsychology has occurred within the last month” and concluded with an alarming question about psychics nuking cities so that they became lost in time and space. If this sounds like a plot out of science fiction, it is - but it’s also a NSA memo from 1977.

The first “event” raised by the NSA note is a CIA report which mentioned KGB research into parapsychology. According to this, the KGB used hobbyists and non-governmental researchers to talk to western scientists. This allowed the KGB to collect useful information without putting themselves into a position to accidentally leak confidential information to westerners. According to the NSA note, this tactic yielded “high grade western scientific data.”

The next event described by the NSA note was what appeared to be a Russian provocation, though exactly what sort was a matter of some debate. In June 1977, an American journalist was detained in Russia for receiving a Soviet paper on parapsychology. The paper allegedly documented “PSI” (i.e. psychic) particles within the living cell, allegedly providing a physical basis for parapsychology. 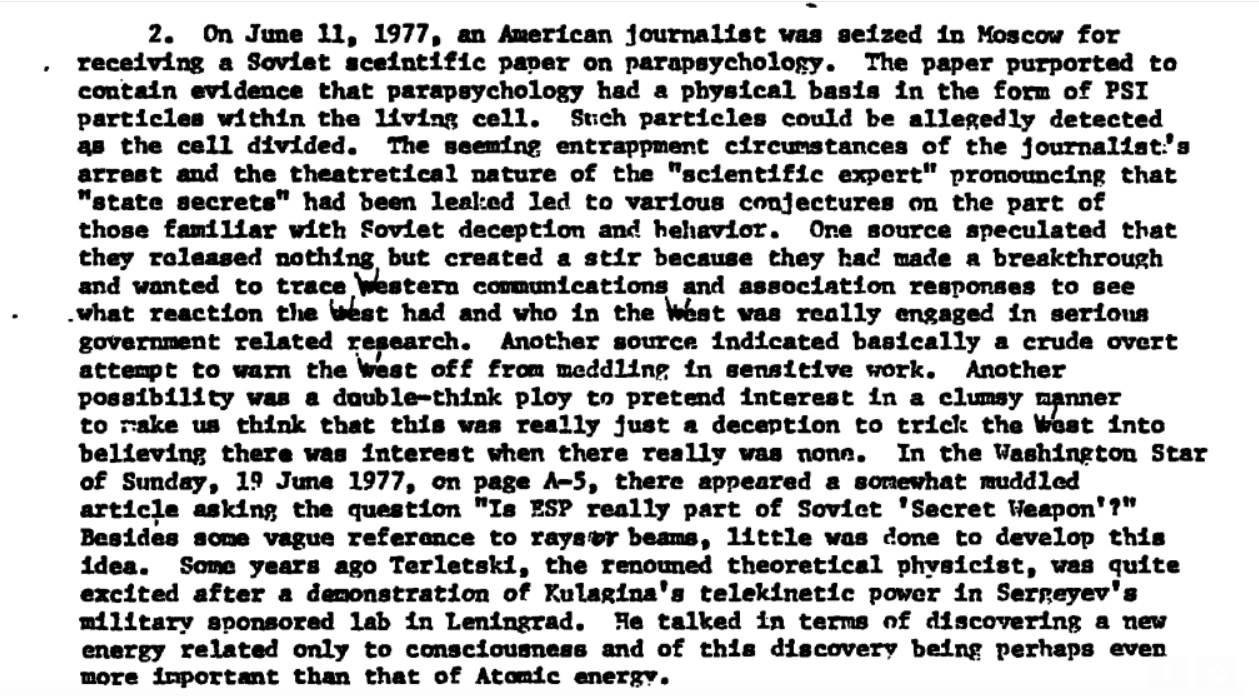 This struck American intelligence as being a form of entrapment, though the goal was uncertain. Some thought it was an effort to provoke radio chatter which the Soviets could trace to get a better idea of the U.S.’s interest and activities. Another theory was that it was simply a warning to the West to stay away from sensitive Soviet research. A third theory was that it was “a double-think ploy to pretend interest in a clumsy manner to make us think that this was really just a deception to trick the West into believing there was interest when there really was none.” While this last theory might sound paranoid, this is how denial and deception operate - and it’s something that Russian counterintelligence has long excelled at.

The section concluded with a note that there had supposedly been a successful demonstration of “telekinetic power” in a Soviet military sponsored research lab, and the alleged discovery of a new type of energy “perhaps even more important than that of Atomic energy.”

The third event was the apparent postulation by “some physicists along with the famous evolutionist, Teilhard de Chardin” that the universe was more of a “great thought” than a “great machine.” According to this view, “the ‘unified field’ on ground of reality is awareness.” The note cited telekinetic experiments and postulated that “awareness focusing” could produce “a new form of energy that moves or perhaps alters matter.”

The report cited British scientists experiencing “poltergeist phenomena” after testing Uri Geller. Objects allegedly left the room, some of which apparently reappeared later. Supposedly, this didn’t surprise unnamed scientists who found it no harder to believe that objects could disappear and reappear than it was to believe in the “detected particles emerging from energy and dissolving or disappearing back into energy.”

From these premises, two types of telekinetic weapons were hypothesized: a telekinetic time bomb and the equivalent of a psychic nuke that could dislodge a city in time and space.

The first involved a member of the command and control staff being kidnapped and subjected to trauma that would allow him to be “suggestively programmed to develop telekinetic effects under stress at work.” The theory was that when an emergency situation arose and the officer was subjected to stress, objects would begin to move and disappear independently “and communications would become impossible.”

The second hypothetical weapon was even more elaborate and potentially terrifying. Citing a prediction of “a massive change which will alter the direction, time, space and energy-matter relationship of our world,” the note wondered what would happen if a group of psychics were brought together. If ten people who were “evidencing disruptive telekinetic phenomena” were brought into one area, would it “cause a chain reaction, causing much matter to reverse direction and sink back into a sea of energy or be displaced in time and space”? The memo concluded by wondering if such an event reach a “critical mass” and affect an entire city.

By an interesting coincidence, the “Philadelphia Experiment” hoax bears some superficial resemblance to the theorized weapon in the NSA note. According various versions of the hoax, the USS Eldridge was temporarily rendered invisible or transported through time and space. The incident is even listed on NSA’s webpage of paranormal topics that they don’t have records on. However, there were other papers prepared on the perceived potential of weaponizing psychic abilities, some of which will be explored later. For now, you can read the NSA note below:

Image via Something’s Out There