As part of our project to uncover the extent of the country’s backlog of untested rape kits, we’ve seen a variety of policies at every level. Due to there being no federal mandate on collecting, tracking, or testing sexual assault evidence collection kits, the laws are left up to individual state, county, and town law enforcement agencies. As one might assume, this leads to almost no standardization.

The care rape victims receive is entirely dependent on where the crime occurred. Good sexual assault response policies are comprised of a number of initiatives, including (but not limited to) specific officer training, a victim-centered approach, access to victim advocates, guidelines for submitting kits to labs, and victim notification. Based on what we’ve seen in our reporting so far, we’ve rounded up a list of the five best - and five worst - sexual assault response policies across the country.

We wrote about Hawaii’s Act 207 in May, and the rape kit reform report still stands out as one of the best sexual assault response policies in the country. The act was drafted by a working group comprised of various Hawaiian police departments, sexual assault treatment programs, and prosecuting attorneys, and outlined ways to improve the state’s handling of sex crimes. The plan is victim-centric, and appropriates money for testing backlogged and future rape kits. Although the plan drafted by the group hasn’t been implemented yet, it’s a huge step in getting the state’s 1,951 backlogged rape kits tested, giving victims justice and closure, and preventing a future backlog.

You can read the full plan released to us here.

In June, national non-profit organization ENDTHEBACKLOG announced that Texas had become the first state in the country to impose their six pillars of comprehensive rape kit reform, meaning their moves repair the multitude of issues that have created extensive backlogs. Notwithstanding the state’s recent improvements, hard data proves Texas is far from perfect. Dallas, which earmarked funds to test its backlog six years ago, has still only tested half of it, and our requests with other Texas law enforcement departments haven’t provided us any documents. Texas makes our “best” list because a large volume of rape kit reform legislation has been passed, but now it’s time to see how well it’s implemented.

Gardner has a seven-page sexual assault evidence collection and handling policy. It begins with general guidelines, which includes the important understanding, stemming from a 2005 Massachusetts Supreme Judicial Court decision, that victims do not always immediately report rape and sexual assault.

The entirety of Gardner’s handbook shows an understanding of victim trauma and advises officers on how to mitigate it. Evidence is handled and preserved according to specific regulations, and a Rape Reporting Unit exists to “improve the quality or rape investigations and prosecutions.” There are also designated officers trained to specifically deal with cases of sexual assault. The handbook exemplifies a perfect balance between rigorous investigation and a victim’s need for care.

While Santa Ana has a large backlog - 498 kits since January, 2000 - keeping track of them is a step toward testing them. They also keep track of how many kits they have collected and how many they’ve tested. This record keeping is important because it means having untested kits is a problem that cannot be disputed. It’s easy to ignore something when there is no data pointing toward it. Santa Ana also has specific training for sexual assault cases and keeps rape kit evidence indefinitely.

The Midwestern city’s police department released their standard operating procedures. Although they’re not as extensive or as explicitly victim-centric as Hawaii’s, they do include instructions for investigating sexual assault. Additionally, we were given forms that are filed in the aftermath of such a crime. These forms result in a long paper trail that effectively keep track of kits collected and their location, and inform the victim of services available to them and rights they have regarding their evidence kits. 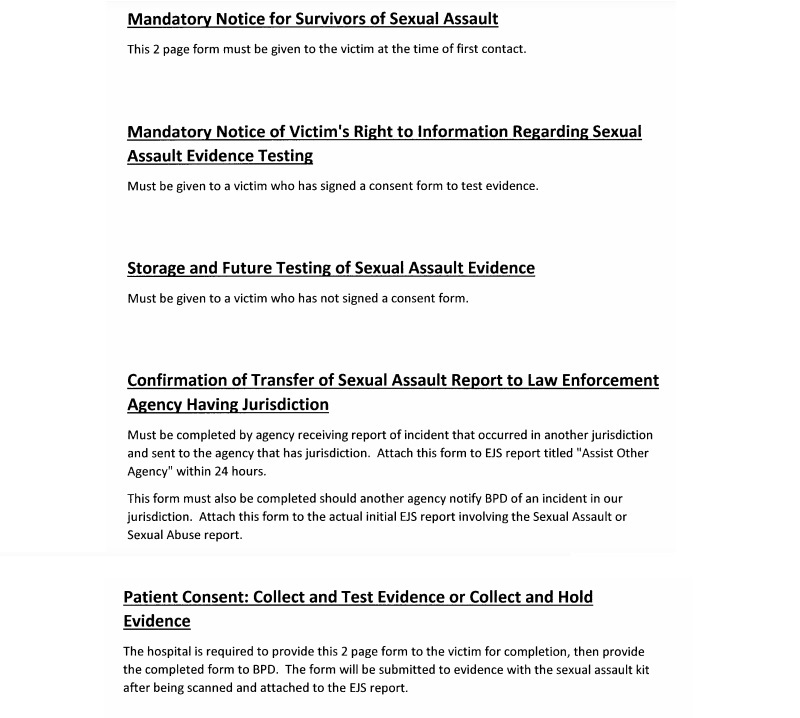 The forms inform survivors of rights they have, including receiving free and immediate medical care, not having to prosecute the crime, and being able to petition for a No Contact Order with the perpetrator. They also list victim services available and explain how long the collected DNA evidence will be kept and what information they are allowed to obtain after their kit has been tested. The department also maintains a log of all reported sexual assaults.

Our request with the Mount Pleasant Police Department resulted in one email that secured its place among the list of localities with the worst sexual assault response policies. The response came from police chief Ron Archer and said the small town has only collected nine sexual assault kits since the year 2000.

While he stated the procedure that typically happens during these cases, he conceded that the department maintains no specific policy regarding sexual assault evidence collection. Without a clear, written policy, there is no guarantee that these procedures will happen every time. There is no guarantee the officers will be trained in handling these cases or that the kit will be tested in a timely manner (or at all). We are even unable to know what happens to the victim during this time - what services are made available to them, what happens during investigations, and if they’re notified when their kit is tested is all up to the discretion of the presiding officers.

The Lowell Police Department couldn’t answer our request for data on kits collected, kits tested, and kits in the backlog, because the department, apparently, doesn’t keep that data.

Despite the city being home to more than 110,000 residents and multiple hospitals and universities, the lack of federal laws requiring rape kits to be tracked and tested allows Lowell to forgo collecting these important crime statistics. In a similar vein, their evidence collection handbook only mentions sexual assault twice, and provides no guidelines on how quickly rape kits should be submitted to the lab, tested, or uploaded into CODIS. There is nothing about preservation or destruction of kits, and nothing about training specifically for handling cases of sexual violence.

Hocking County makes our “worst five” list because, like Lowell, they’ve forgone keeping track of how many kits they’ve collected and tested. The extent of their backlog, therefore, is unknown. They do have a handbook and response team, but not having data means we have no way to gauge how well it’s working.

Baltimore seems to be a perfect example of what happens when something falls out of the scope of federal law. The department could not generate any data regarding the number of kits collected, tested, and backlogged, because the kits are not specifically identified as rape kits, instead recorded as “general property.”

When it’s impossible to know how many victims have been failed by a system, it’s impossible to change the system. Not tracking rape kits means we have no idea how well the Baltimore Police Department is testing or prosecuting these crimes. While the department admits there lack of data comes from a lack of federal or state mandate …

to be fair, the BPD has been attempting to remedy this as of November 2016, when they decided it was time to begin tracking such crimes.

The department does have specific policies, but like other places without data, it’s impossible to know how well these policies are working.

The Omaha police department makes our list as one of the worst five because they only track rapes cleared by arrest. According to the Rape, Abuse, and Incest National Network (RAINN), out of every 1,000 rapes, only six perpetrators see any jail time. Because such few rapes are cleared by arrest, tracking only the ones that are leaves a huge gap in our knowledge. When asked, the department said they were working to upload a database of all statistics on their website, but still has yet to do so.

Beryl Lipton sent this request to the Baltimore Police Department of Baltimore, MD

Vanessa Nason sent this request to the Bloomington Police Department of Bloomington, IL

Vanessa Nason sent this request to the Gardner Police Department of Gardner, MA

Beryl Lipton sent this request to the Omaha Police Department of Omaha, NE